What should I do to keep my peppermint plant alive?

I decided to buy a small peppermint plant to have in my room this year.

I put the plant in a new pot with additional soil and I've been keeping it indoors for most of the time in a place where it has lots of sun (I live in Spain) and I've been watering it when the soil dries (I read in the internet that this is the right way to water it). It seems that something is going wrong because the plant is not very lively and it's turning a bit yellow in some zones.

This is the current status of the plant: 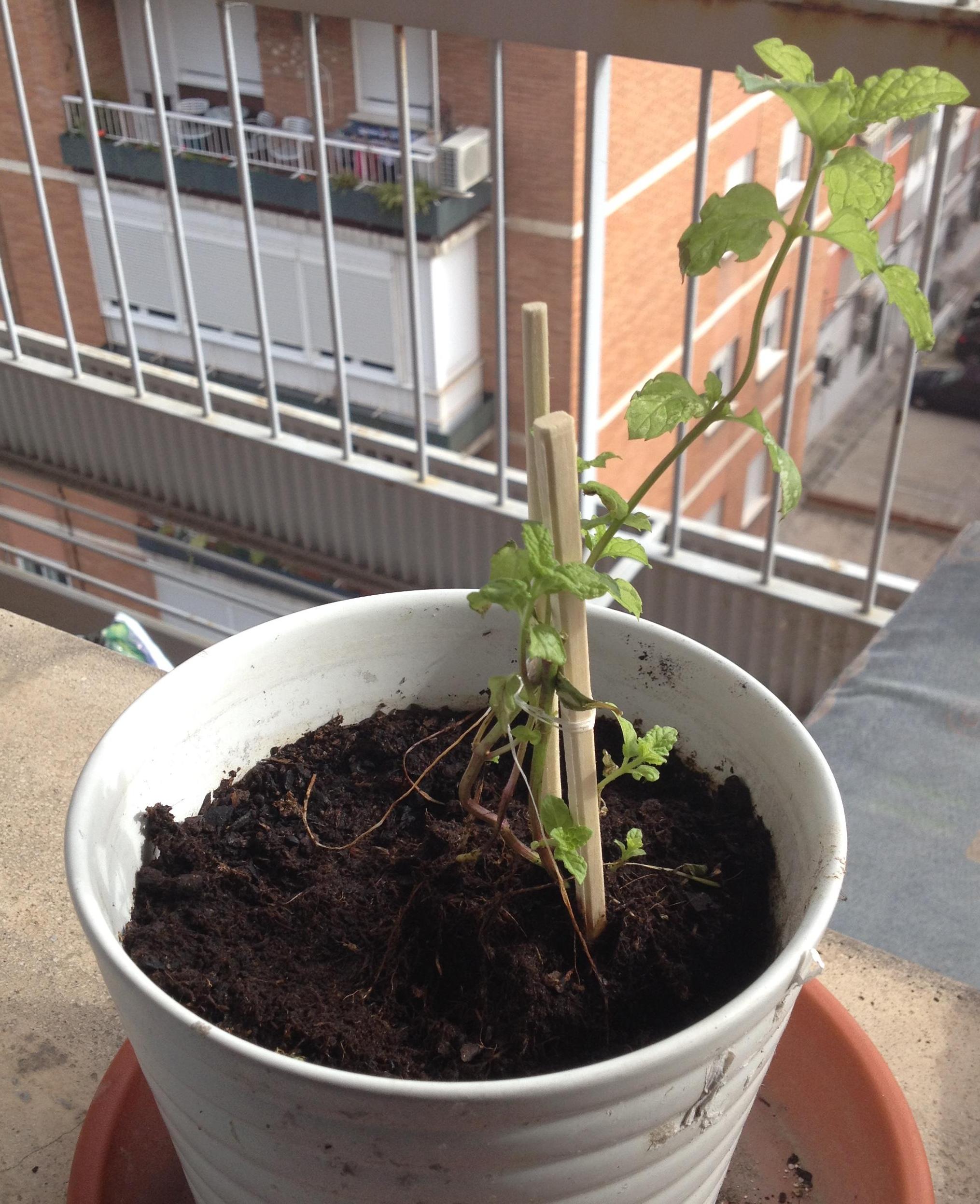 Also I've been encountering very little flies around the plant, is this normal?

This is my first gardening experience and I don't know what I'm doing wrong. How should I take care of the plant?

Few things to mention: first, mint prefers to be outdoors, but can be grown inside, second, the link you provided to show which mint you chose only leads to what looks like an internet service for a supermarket, not showing mint at all. From that, I'm deducing you may have bought a pot of mint from the supermarket, because most of them sell mint in the herb section. If you did, I'm wondering how bushy it was when you first got it - has it died back in lots of places so that now all you've got is one main stem?

Third question - that pot its in, does it have a hole in the bottom for drainage? If it hasn't, then you need to get a pot which has holes in it. If it does have holes, when you water the plant, do you leave water sitting in the tray at the bottom? If you do, that tray must be emptied out 30 minutes after watering, so that the bottom of the pot is not sitting in water.

The insects you see flying around the plant may be fungus gnats - these like damp soil conditions, so they're an indication that your plant may be sitting in soil that's far too wet - and that might be because the plant sits in water at times.

I suggest you turn it out of the pot and see if there's a problem at the root (insects, grubs, anything like that) and to see how much root material is actually present - it may be some of the roots have rotted back and you now need a smaller pot to assist in the plant's recovery. If it does need a smaller pot, use one with holes and use fresh potting soil, water straight away, then empty away any excess, allowing the plant to drain properly. If it doesn't need a smaller pot because there's plenty of root material, then replace in the existing pot IF it has a drainage hole, (though I would recommend using fresh potting soil), remove the sticks you have supporting the topgrowth, and cut that back by half. Cut back also if you are putting it into a smaller pot. Ongoing, water when the surface of the potting soil feels dry to the touch, then water thoroughly, allowing the plant to drain down and again, tipping away any excess water in the tray. If you can only keep the plant indoors, then as much light as possible, especially sunlight, and don't keep it near a heat source such as a radiator or hot air vent.

It probably needs more nitrogen (since it has yellowish leaves). I would recommend just fertilizing it.

Also, I wouldn't let the branches get too tall, if you want it to be bushy. Bushier mint seems to me to be happier.

However, it's good to note that mint gets rootbound fast. I don't think yours is rootbound, yet, but it's something to keep in mind. In my experience, it only lasts so long after it gets rootbound (but giving it a larger pot when that happens will probably prolong its life), or you can take cuttings to start new plants, which should then live a good while.

Not the answer you're looking for? Browse other questions tagged watering indoors insects mint or ask your own question.

5
Pink Anthurium in apartment - leaves turning brown and dying
8
Identifying types of mints in my garden
6
Disease / pest identification
8
Should I be concerned about these purple stems and dead leaves?
2
How should I move a plant indoors without bringing in bugs?
5
Dead flies around my Sansevieria
3
Why is my Areca palm dying
1
Is this red habanero plant overwatered and how should I save it?
1
Help I think I may be killing my mint plant
2
Help me save my Variegated Rubber Plant 'Variegata' (Ficus elastica)