Why does my pepper plant have yellowing, drying and curling leaves?

One of my pepper plants has so far suffered from pests, blossom end rot and odd skin blemishes and unfortunately the plant is now taking a turn for the worse and looking rather unhealthy.

The leaves are drying out and curling along some edges, and they aren't very green (yellowing?).

You can see the largest dry patch in the first image - the front of a leaf, while the second is the back of a leaf to demonstrate the loss of colour - compare it to the shots below. 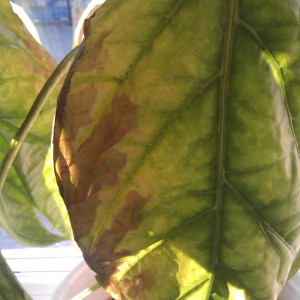 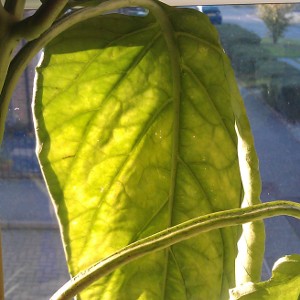 Another healthier plant (for comparison):

This plant sat next to the unhealthy one, about a foot away on the same window sill, so conditions should be very similar. Images are again front then back of two leaves. 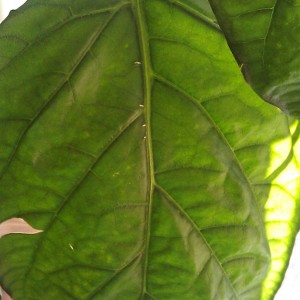 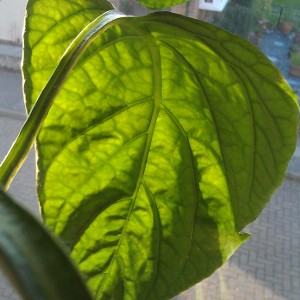 A few other points that may be relevant

What could be wrong with the unhealthy plant?
What can I do to help it?

It looks like your plant is pot bound (also known as root bound). The solution here is to purchase a bigger pot or transplant it into the garden. Based on the time of year and the fact that its an indoor pot I'd say that a larger pot would probably be the best solution.

Mike posted some links to repotting that you can use to guide your repotting process.

Not the answer you're looking for? Browse other questions tagged diagnosis plant-health indoors leaves peppers or ask your own question.

24
Insect infestation on my pepper plant, what do I do?
18
Should I remove fruits afflicted with blossom end rot?
18
Is it worth keeping indoor pepper plants alive over the winter?
10
One of my indoor pepper plants seems to drink less water than its peers. Should I be concerned?
12
What are these blemishes on the skin of my bell peppers?

10
A few leaves on my peppers are showing multiple small holes, should I be worried?
2
Why do we have yellowing watermelon leaves?
3
Why is my Cayenne pepper plant losing leaves and curling/burning at tips?
2
What do my pepper plants have damaged, curling, and yellow areas on the larger leaves?
3
Why does my house plant have brown leaves?
3
yellowing leaves and black leaf parts on alocasia
1
Why are my tomato plant leaves curling
1
Green Pepper Plant with Blossom End Rot