What tree does this nut come from? Is it a walnut?

I was hoping someone can help me identify this nut and the tree it goes with. I found a bunch of these near my truck when I went to my Uncle's mountain place in Grayson County, Virginia. I'm pretty sure it's growing wild as he cleared the property when he bought the place and never planted anything. It was raining on me when I took the pictures, but I couldn't see any nuts actually on a tree. However, most of the nuts seemed to be clustered under the tree in the pictures I included. Again, I didn't actually see any on a tree, so this might not be the tree they came from, but there were a lot of them directly under it. It looks like a walnut to me, but when I looked up a picture of a Black Walnut, the green pods were smooth. The one pictured clearly has sections. Whether this is due to the beginnings of decay, I don't know. I also have a picture of the nut out of the shell, pictured near the one in an intact shell. Thanks for the help. 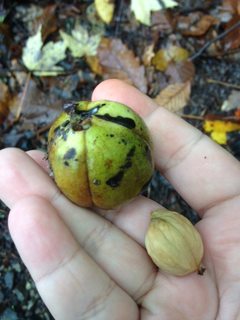 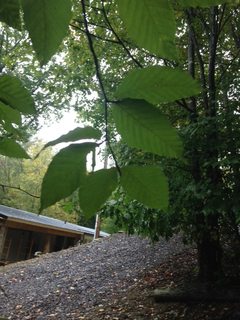 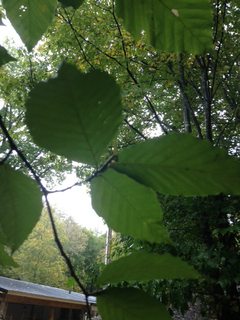 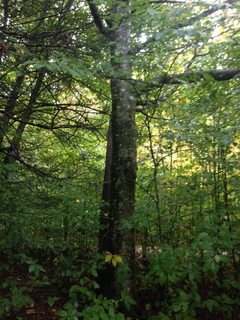 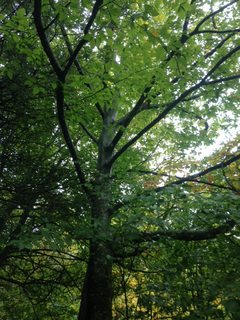 I had to dig pretty deep into my reference books for this because the nut and the leaf do not match.

The nut appears to be from a Shagbark hickory (Carya ovata) based on the four parts of the husk on the nut. That being said the whole hickory genus is not fussy about pollinating and will cross within the Carya species even pecans.

The leaves appear to be from another American native, the American Hornbeam, Carpinus caroliniana who also have two species that interbreed. The identication is based on the serration on the leaves. These plants have smooth bark. It could also be American Hop Hornbeam or Ironwood, Ostrya virginiana which has long vertical bark sections on the trunk.

You can find the tree because its leaves are bigger than the normal ones (5 to 10 inch) I believe that the nuts are a juglandaceae kind. In your image you can appreciate the leaves of your tree (the big ones).

I agree, hickory of some thing. The leaves are from a different tree. Hickory leaflets come in groups of 7-11. The trunk photo isn't clear enough to be sure, but it looks a little large for a hornbeam. There are hickories other than shagbark, found in the deep woods as opposed to farmland. May be a mockernut.

I agree that this is definitely a hickory nut. Hickory nuts are really good if you can find them without weevils. It could be a shagbark or a mockernut hickory. My guess would be mockernut as it's far more common in your area and it'I go up to grayson highlands around you to hike every so often so I'm familiar with the area.

One thing I don't agree with is the identification of the tree in the pictures. It's definitely not the source of the nut, so it's not a hickory. It's definitely not a musclewood/american hornbeam (Carpinus caroliniana) because it is much larger than most I've ever seen and I'm not seeing the characteristic muscly texture of the trunk. It's also probably not hop hornbeam (Ostrya virginiana) because I'm not seeing the thinly furrowed bark.

The tree in the pictures looks like an American Beech (Fagus grandifolia) to me. Smooth bark, thin papery serrated leaf etc. The only thing that would really seal the deal is a picture of a leaf bud, but I'm almost positive that's an American Beech without.

Not the answer you're looking for? Browse other questions tagged identification nut-trees or ask your own question.

17
What is this shrub and has it come back from the dead?
4
What plant did this root come from?
7
Can anyone identify this seed/fruit and what tree it has come from?
7
What is this tree with ovate-elliptical, serrate leaves, and racemes of small berries?
2
Why would a walnut tree lose all its leaves in ten minutes?
3
What plant does this seed pod shaped like a bulb with tendrils come from?
4
What can I do with this broken leader on a black walnut?
8
What is this tiny blue/purple flower with thin, vinelike stems, in Charles City, Virginia?
4
Can I get a productive nut tree in the north of England?
1
Which nut is this?