What soil mixture should I use for my office Schefflera?

I'm on here again, asking more questions about my office's Schefflera that I'm in charge of. You can find pictures and a previous question here:

I think I need to repot it now. I've been told it's almost as old as the company and I doubt it's been repotted much since then. When I first came to care for it, I started playing with the watering schedule. I read that they like to dry out slightly and then be soaked. Well, I watered it a decent amount for the size of the pot and it stayed sopping for almost a week. I started watering it more lightly and letting it dry out down 2-3 inches before watering again. Basically, every other week. I've recently started fertilizing all the office plants once a month. It's not very often, but they are all in low light, so I figured I shouldn't over fertilize them.

The Schefflera has shown pretty good progress and has at least doubled the foliage on the top since I took it over. I've even had new growth about a foot from the base. You can see that growth in the linked post. That growth has since died off, but a few days ago, I noticed two new growths slightly above the one that died off. While the other growth got tall before dying, it never leafed out. These two new growths are very close to the trunk, but have tiny leaves. I'll try to get pictures to show these growths as well as the dim lighting the room gets when the office light is off, which is often.

I know the plant needs more light, but it's not really up to me. I'm just doing the best I can with it. I believe it needs to be repotted. I'm guessing that it's possibly gotten root bound, but I think it's probably rotted some of the roots because of the water retaining soil that's in it. It's currently in a 14-16" self-watering pot (depending on how warped it is where you measure). I found a 20" on sale at Big Lots. I can drill holes in it and put a tray under it. That will fix the drainage issues.

I need to know a good soil mixture for this plant. I have more of the miracle grow, water-retaining soil on hand in the office. I also have half a bag of compost from Home Depot. I figure that I can mix the half bag of compost, which is courser, with the miracle grow, some orchid bark I also have on hand, and maybe some perlite. This mixture seems like it would retain some water over the week, but drain much faster and not become easily compact. What do you guys think of this mixture or would you do something different?

I realize that I may lose the little growths on the base, but I think I should take the chance. I think it's akin to lopping the flowers off plants if the plant is weak. You may lose something, but the plant will be healthier and you'll end up with more growth in the long run. Thanks.

Edit: I took some more pictures I'm adding. You can see that a lot of the leaves are drooping. I had it on an every other week watering schedule, but we got a Friday off for a holiday and I plum forgot to water it till the next Friday. There was a lot of drooping. It perked back up some, but it may be like orchids in that once the lack or water damage is done, it just doesn't stand back up. I also tried to show the low light levels, but my phone brightened the first shot up. The others have the room light on. You can see the new growth on the trunk.

Edit (10/19/2015): I repotted the plant last Friday before the weekend. I'd bought a 20" pot for it and I drilled a couple of 3/8" drain holes in the bottom, as well as several around the side at the base. I didn't see a specifically 'tropical' potting soil and knew the moisture control held too much water. I ended up using about half and half Miracle Grow potting soil and Miracle Grow's natural compost which is a little chunky and I though would help the drainage. I also added a good bit of perlite to make it lighter an airier. I had my hands covered in dirt and couldn't take pictures, but there wasn't a lot of root left. I could have fit most of the root ball in my two hands. I had figured that the constant moisture was probably rotting them, but I was hopeful when I started letting it dry out more and it started putting on a lot of top growth. I repotted it in this much looser soil, with drain holes. I think that between the drain holes, the loser soil, and the fertilizer from the potting soil, hopefully this plant will start growing some good roots. If the little plantlets growing near the base take off. I probably will lop off the top. I'm still nervous about killing off an office relic, so I'm being cautious. Thanks for the help. I'll try to update this post in a couple of months to let you know whether it improves or declines in the new setting. 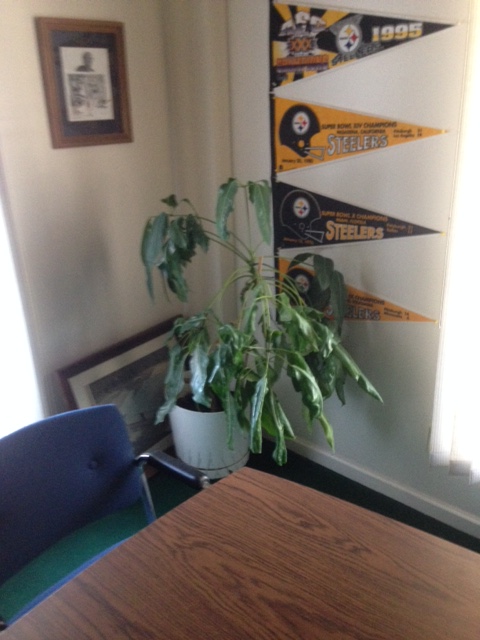 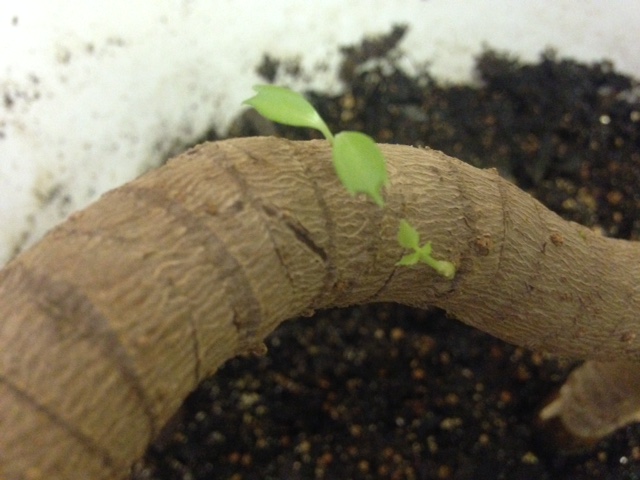 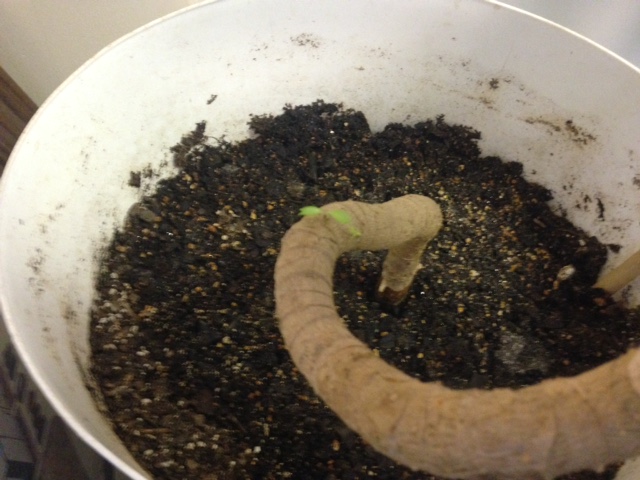 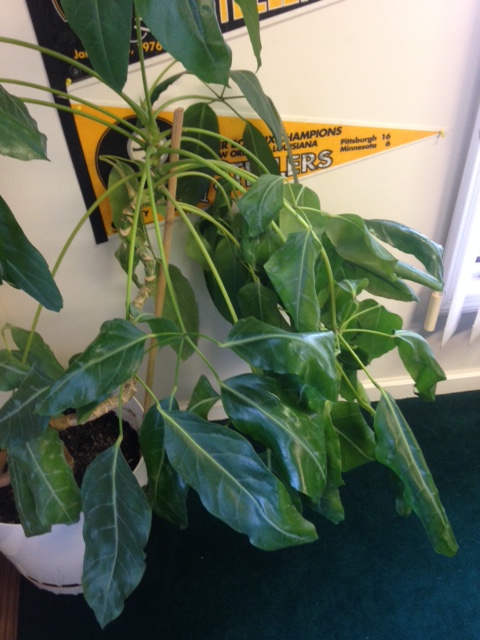 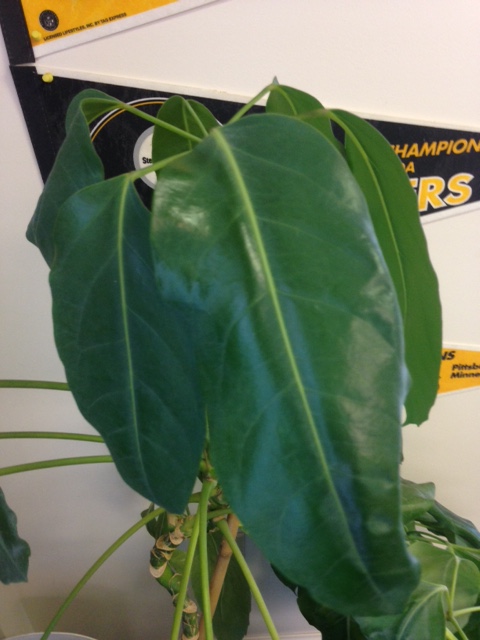 I agree with Bamboo in their previous answer that this is a Scheffelera 'Amate'. A trade marked cultivar that can be identified by the glossier leaves in a lighter green than the species and resistance to spider mites.

I also agree that the best thing for the appearance of this plant is cut it back hard. These plants bud readily from old wood which you have seen yourself.

You asked what soil mix to use. The choices are varied and range from what is easiest to what you could do:

I realize that this is an unorthodox approach. The goals of a tropical plant grower are to maximize growth and minimize time to market. Soil less mixes do a fine job as they are consistent. Over time a soil less mix does not do well as the organic matter is taken up by the roots and the remainder is unable to buffer the buildup of salts from the tap water used. As the soluble salt level rises odd deficiency diseases occur and a general lack of vitality. A clay based soil is better at absorbing dissolved minerals from the water and retains a soil structure long after a soil less mix is nothing but perlite and roots.

When re potting there is no need to be delicate. Take a sharp knife and cut off the bottom third of the root ball. Make a series of thin vertical cuts around the perimeter of the remaining root ball to cut established roots.

Pot in a pot one size larger with new soil or soil less mix. Water thoroughly and wait. The next watering may be several weeks later as new roots establish. Do not fertilize yet, wait until a bit of new growth shows and water at half the recommended strength.

I'd add to Kevinsky's answer, with which I entirely agree - if possible, do not use a self watering pot. I've never yet seen a plant in one of those long term that continues to do well, they almost always get problems from the constant availability of moisture.

It's a great shame that the John Innes formula potting composts do not seem to be available in the States, though I guess its possible something similar is, just not called that. John Innes No. 2 or 3 potting compost (it includes sterilized loam) mixed with a multi purpose to make the weight a bit less once wet would be ideal. However, I think you'll find, with or without loam based potting compost, if not in a self watering pot, the end result would be better, once the plant recovers from its surgery. Not sure I'd have the courage to cut the roots though!

Not the answer you're looking for? Browse other questions tagged houseplants soil plant-care drainage office-gardening or ask your own question.

2
Whats the next step to improving my schefflera?

16
Is my Schefflera arboricola getting the right amount of light and water?
9
What's digging holes in my indoor potted plants?
6
What are some succulent plants that are suitable to be planted in my office?
5
What is happening to my Snake plant?
4
What mixture of liquid soap to water should I use for soil with high silicon content?
2
What is causing this yellow fungus in my plants' soil, and should I be concerned?
5
What exactly is garden soil, and why shouldn't it be used for potted plants?
7
Should I cut the top of my Schefflera?
4
Can I save this ficus elastica (rubber tree)?
2
Help me save my Variegated Rubber Plant 'Variegata' (Ficus elastica)