Is this plant (Radermachera ) sick? Leaves turning yellow and spotty

Previously I did not know the species of the plant in the picture. (The one with the owl ornament). I finally found the sticker. It is Radermachera. 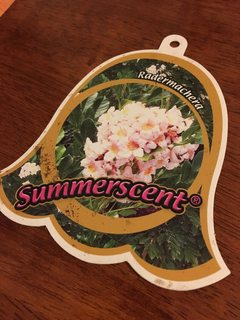 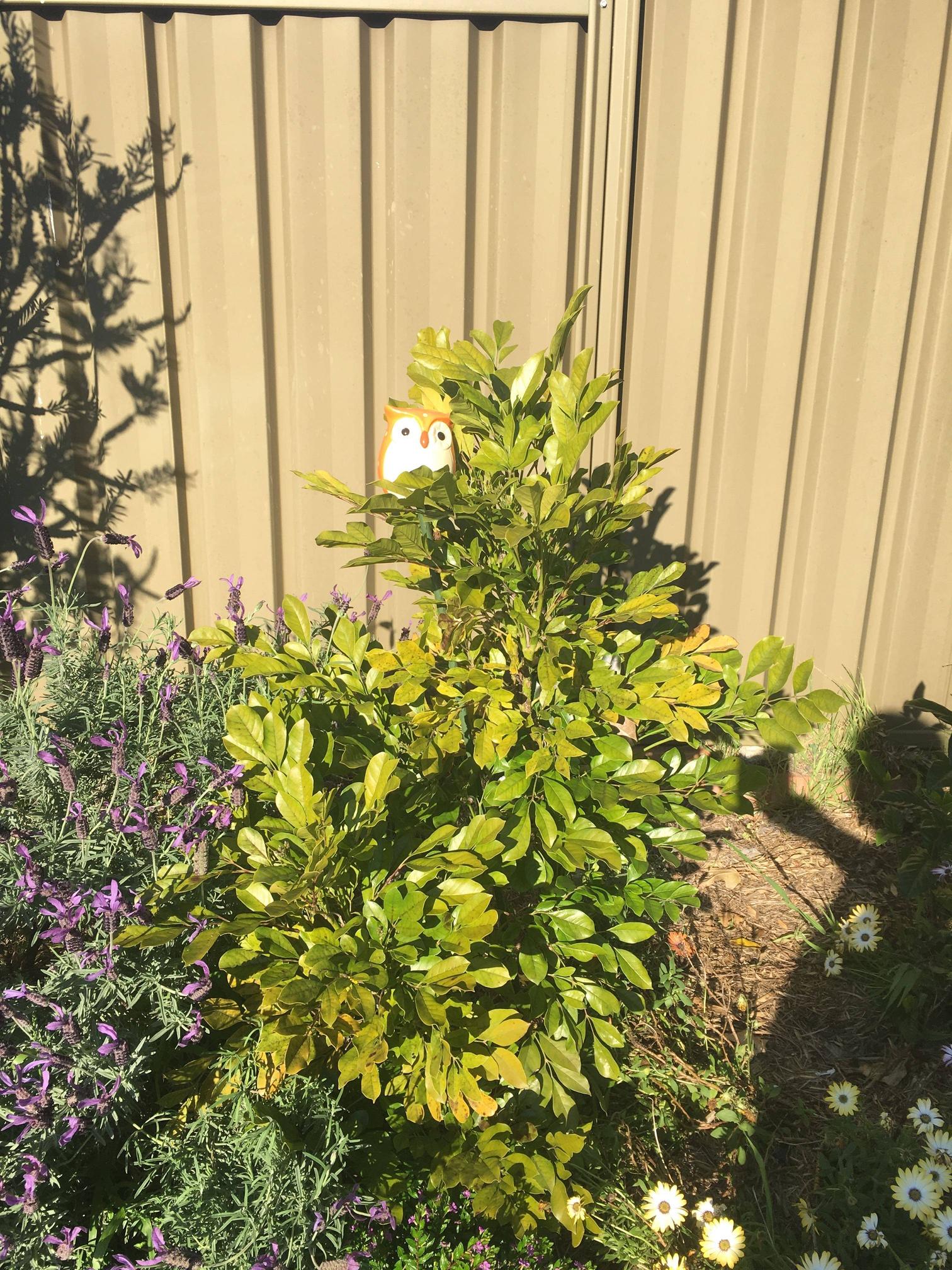 In last couple of week I find that many leaves start to turn yellow. Some of them even developed some dark spots. 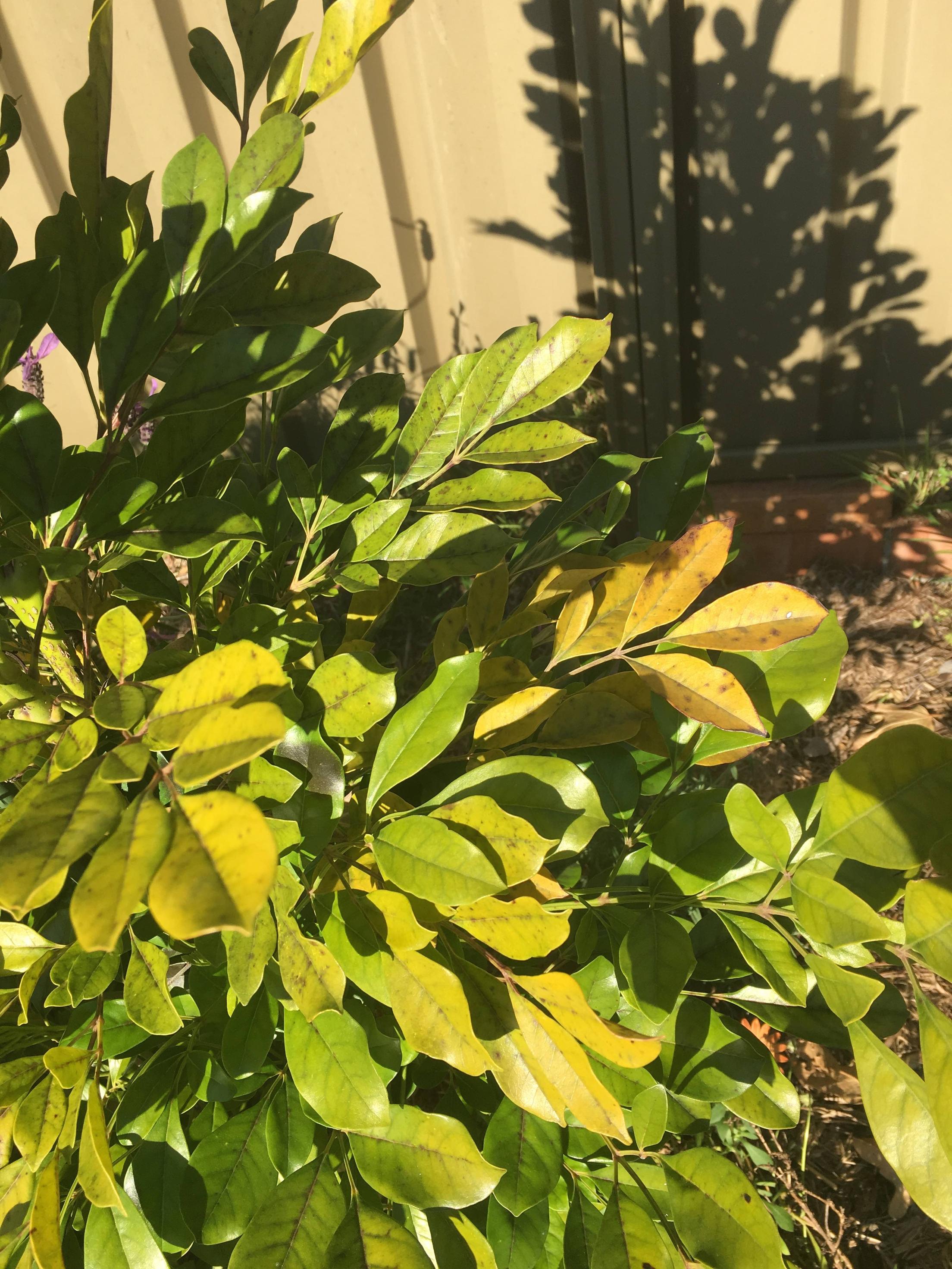 Is this plant in distress? If so, is there anything I can do to make it well again?

As per @stormy's suggestion, I will add photo of the underside of the leaves. I am a total amateur. I use slow release fertilizer every couple of months. 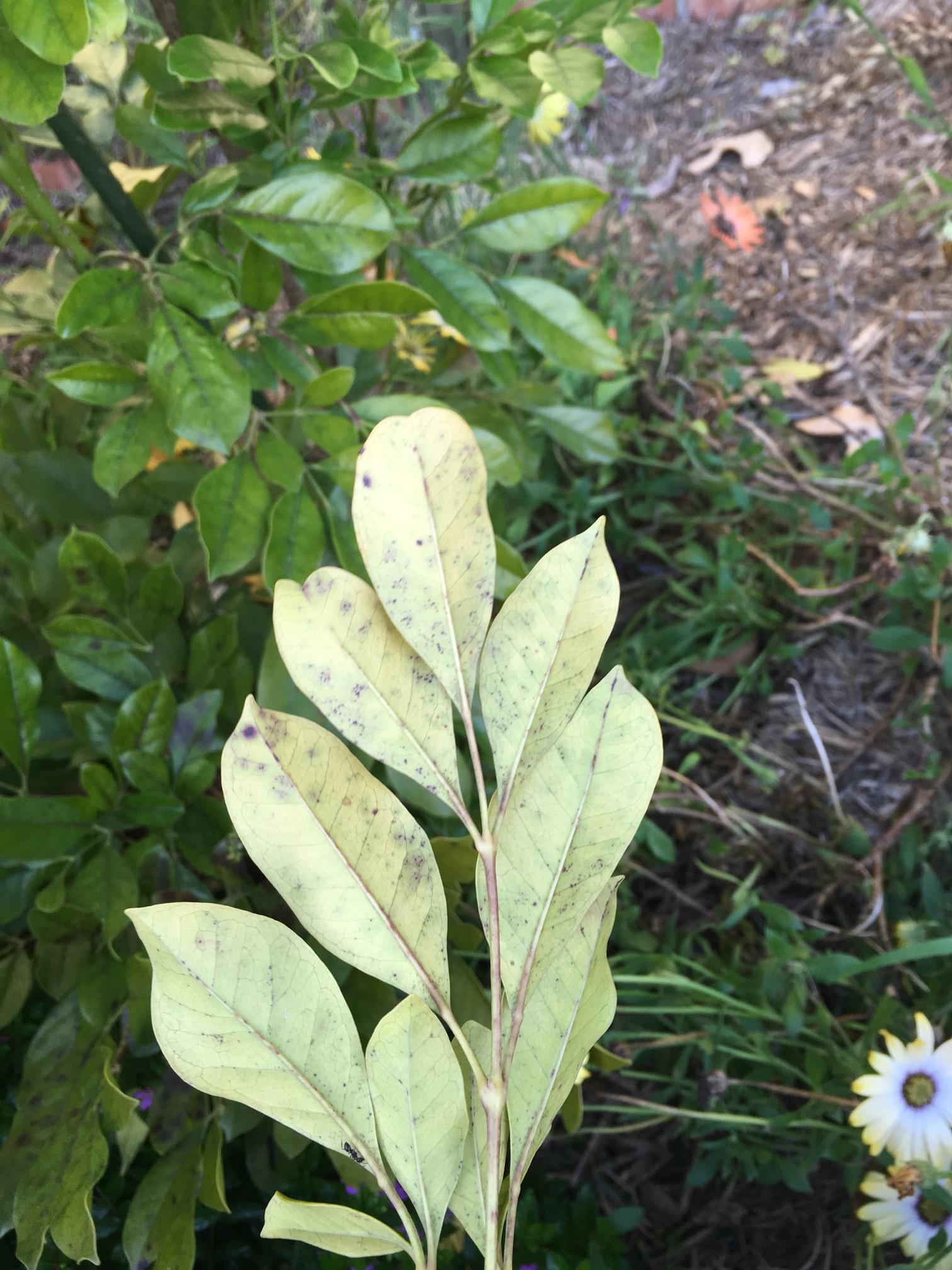 Radermachera I know as a houseplant, but not this particular variety - the one you have appears to be a fairly new introduction during the last ten years in Australia - which also means there is little real information about it on the web in terms of growing it outdoors and any problems it might experience. It is attractive to pollinators such as bees when in flower, and is a tropical/subtropical plant, which therefore means it won't appreciate temperatures much below around 18 deg C, and I believe temperatures in Sydney can go lower than that, 14 deg C being an average temperature during June. Its particularly vulnerable to colder temperatures and drought when its young, but will tolerate more temperate region temperatures as it matures. It also requires moist, but well drained soil, which means it wants regular supplies of water in a soil which doesn't dry out frequently, but does drain well (yes, I know, sounds impossible!).

However, your plant appears to have a dose of fungal spot, black spot in particular - there is reference to this on the banner for one website via Google - unfortunately, that reference isn't present or visible on the site, but it appears to be suggesting that this black spot may appear towards the end of winter/in spring - I imagine as a result of excessive wetness or low temperatures. Otherwise, I've drawn a blank. If you've had low temperatures, particularly lower than usual temperatures this winter, or wetter than usual weather, that could explain what's happened.

Suggest you try a fungicide treatment spray, if you can find one where you are, which may or may not be effective - otherwise, I recommend the milk remedy for fungal spot, which is one part cow's milk to two parts water, mixed in a sprayer, and spray weekly till run off, including the underside of the leaves. Use skim milk if you can, the less cream in it the better, or it can get a bit smelly on the plant in sun/high temperatures. This treatment has the advantage of damaging neither the environment nor the wildlife (including bees). Remove promptly any leaves which fall, and you can pick off severely infected leaves yourself before they do fall - this type of fungal infection will leave spores in soil, so best not to allow leaves to sit on the ground. If it doesn't improve, or loses leaves and becomes unshapely, cutting it back by a third might help to induce new growth. In the meantime, keep it well watered during dry spells as your spring advances and the weather heats up. The link below confirms what I'm saying about the milk treatment, because I know it can sound a bit airy fairy...

All that said, I can also see what looks like a couple of small, tan coloured eggs or insects on the back of a leaf (penultimate leaf, left hand side) on the central rib and either side in the last photo, with possibly more of the same on another leaf, and an ant on the leaf. This might indicate a problem with scale nymphs, so check the rest - ants on plants usually indicate scale or aphid infestation. If that's what's there, you'll need a pesticide spray to treat those with.

Well, gulp, this is not Golden Privet, it is Clethra alnifolia 'Rosea'. As you've found. Trouble is is that the leaves should be dark green...sigh! Definitely needs a good fertilizer a bit higher in Nitrogen and includes iron. Clethra is a ACID LOVING shrub. Gotta check the pH for sure. If the soil is too alkaline this plant won't be able to uptake elements such as iron and nitrogen. Go with a slow-release with micronutrients and iron. Get a soil test...try your closest University. Correct pH before fertilizing.

Not the answer you're looking for? Browse other questions tagged identification diagnosis or ask your own question.