Which spiders should I allow in my garden?

I know most spiders are harmless and beneficial, but which spiders do I want to look out for and get rid of in my garden? (Midwest United States).

Most spiders are friends to your garden, they eat insects, likely including pests you want gone. I can think of one true spider that you might not want getting cozy in your garden. Meet the Brown Recluse: 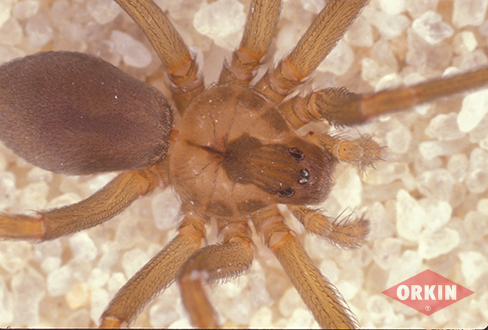 That darker brown fiddle-shaped marking on the head is suggestive of the species. Their eyes are more distinctive, one pair at the center, two pairs to the side for a total of only 6 eyes. At full size their leg-span is about the size of a quarter. They are native to much of the southern US from California to Georgia and as far north as Southern Iowa/Nebraska. They are hunting spiders, they go out looking for prey at night. Their webs are low-lying and messy (not the classic web-shape) and used for shelter. Their preferred habitat around humans is wood-piles, sheds and garages.

They mostly avoid contact with people, but if they're disturbed or feel cornered they may bite. Most bites from the Brown Recluse are not dangerous, they turn red, swell up, then fade away. There are some cases however where the bite can cause necrosis (the tissue at the bite point rots). Because necrosis is the type of symptom you don't mess around with, it pays to keep an eye out for spiders if your garden-work takes you near any of the preferred nest sites I listed earlier. As for actively discouraging them, I wouldn't do much beyond keeping a few yards of open space between any wood-piles and my garden. Trying to actively remove them is a good way to end up getting bit, better to just keep some space between your garden and their shelter spots.

Spiders in the garden are total GOOD GUYS. The amount of insects they control is wonderful!! They will not bother you! Now Tagenaria aggrestice or the Hobo Spider, Aggressive House Spider, Wolf Spiders...Brown Recluse you DON'T WANT in your home. If they bite you you will probably need antibiotics or the necrosis could turn into gangrene. Not cool especially on the face.

They are 'tunnel spiders'...true the males go out at night to 'hunt' but they make a tunnel out of web and attack insects that get stuck in their web. But in the garden, these guys are worth their weight in gold!! If I find these guys inside I trap them and dump their butts outside in my garden.

Black Widows could POSSIBLY make one very, very sick and in rare cases cause death. They are akin to a tunnel spider but their webs look very messy and they are very shy.

People that try to use a pesticide or pesticide applicator and kill ALL INSECTS are in a world of hurt! Pesticides just are NOT necessary!! I hope this helps, I hope you don't kill your spiders. My favorite spider is the Cat Face spider (the female gets a huge body) but as web builders and gymnasts they are spectacular. I've ummmm, had a few as 'pets'...in and around the home.

If you have a question about insects or spiders please get a picture of said felon, what you believe they are doing and pictures of the damage/environment. Never use a pesticide without KNOWING what it is you are using the pesticide FOR. I am glad you asked!!

I wouldn't be too concerned about any spiders garden-wise. There are some wolf spiders that dig holes all over the place, and that might scare you, but those spiders shouldn't be dangerous. They're not brown recluses, although they look similar (I've been told they were before; so, that's why I feel the need to disclaim this). Brown recluses are supposed to go out and hunt (not wait in holes for prey to come by). Wolf spiders that burrow shouldn't alter the appearance of a landscape with reasonable ground cover, but the holes can potentially be quite visible on bare dirt. There are similar, smaller spiders that can abound on the ground, and their numbers may be bothersome or scary to humans, but I don't know what they are, and I don't believe they're dangerous.

Hobo spiders are said to inhabit fields. They have funnel webs and wait for prey, and they're virtually indistinguishable from lots of other spiders. Their venom is potent, but they probably won't harm you or your garden. Their bites are not known to be fatal to humans.

Off the cuff, there are two types of "spiders" that I would watch closely:

Both are spiders in a scientific sense, but probably not what you had in mind...

Also be aware of brown widows -- like black widows, but you know, brown. Same distinctive round abdomen. Spiky white eggsacs. Around here (San Diego) they are in every dang crevice -- especially empty pots or under the lips of plastic ones.

11
Ants and aphids - which should I fight first
6
How can I keep spiders out of the shed?
3
What kind of bug is this & does it eat aphids?
3
Too Many Spiders
3
Spider Identification and Control
5
What's the best way to eliminate/deter rats from a garden without harming squirrels?
7
What harm can moles do to my garden?
2
How should I move a plant indoors without bringing in bugs?