Question prompted by @Stormy who wanted to impart a few ideas.

I have had a few attempts at growing potatoes in bags but they never seem to work out. They grow ok then the green tops just start to wither. Last year I had a watering system and thought they had been over watered, this year I did not water and roughly the same thing happened.

I am south-East Scotland (USDA Hardiness Zone 8). About 1 mile from the coast.

Last time I used a Miricale grow gro-sac, but turned it inside out so the black part of the bag was showing. The bag got too hot to touch on sunny days. Which I thought might have been an issue.

The grow bags I have used this time are shown in the picture. They had fairly substantial holes in the side. Therefore hopefully limiting the water logging issue. 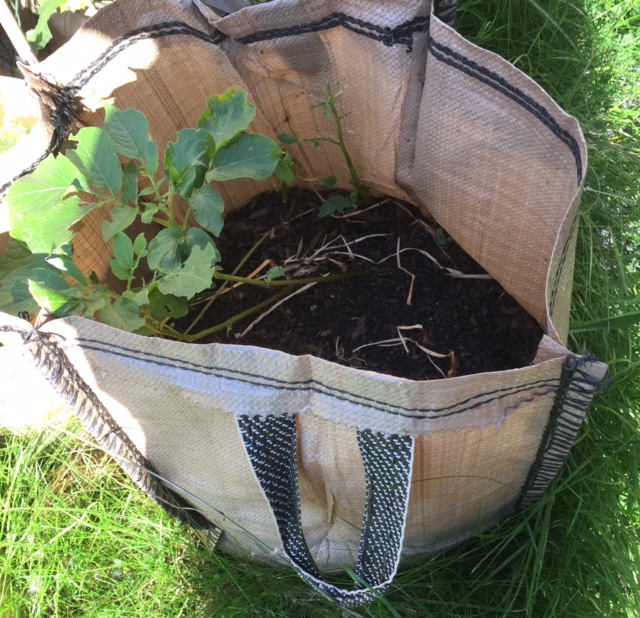 I would be grateful for any tips of how to grow potatoes successfully in bags. I have been trying to follow the Square meter gardening but did not want to use raised bed for potatoes. Not sure why thought they might spread to far in the raised bed.

Let me know if there is any relevant information I have missed.

Best not to plant straight into pure farmyard manure, they'll do better in decent potting compost, maybe 20% John Innes and multi purpose mixed. You can buy this at the garden centre already mixed up, if not buy both and mix them yourself. I'm saying 20% JI because its loam based and can be heavy once wet, likely too heavy for lighter bags than the one you're showing in your photograph, especially if you need to move the bag.

I can't tell if you made holes in the bottom of the bag you used, but I can tell you didn't add compost as the green tops grew - it should be topped up so that only the green tops can be seen. I also don't know whether you chitted the potatoes before planting or what variety, so actually, I don't know very much at all about what you have done!

There are two links below - one is to Thompson and Morgan and its just for interest's sake, I'm not recommending any T&M product nor their potatoes, but they say they have trialed filling the bags up to the top with compost prior to planting the potatoes and had success with this method, rather than the method described in the second link, which is the more usual way of doing it. I can't recommend one or the other, never tried with a bag full of compost, but it might be worth experimenting yourself to see which works best, or at all.

Watering is very important - you need to make sure they have an even and sufficient water supply, but check frequently to make sure they're not too wet or they'll rot, particularly if out in the open and exposed to rain. You may need to cover or move under cover if the weather is wet for an extended period. The reason watering's important is, if the water supply is erratic, you will finish up with 'powdery' potatoes, meaning they'll turn to powdery mush when you try to boil them, even if they're a variety that are meant to be fairly waxy and good for boiling. In terms of drainage, they drain better if not straight onto earth - I used to stand mine on old grill pan grills balanced on bricks (any close spaced rack that's big enough will do) to allow better drainage. Not pretty to look at, but effective.

I'd just add something else - the bags you use should really be black and fairly thick (think heavy duty black rubble sack) - the idea is to exclude light from the tubers as they grow, and its harder to achieve that in light coloured bags. If you don't exclude light from the tubers, they start to go green, and at that point, they're toxic and should not be eaten. That's why you store them in the dark after you've bought them or dug them up - it should also be cool to deter any possible chitting or sprouting if they're meant to be eaten.

Also note I am in the UK, which means I know what you mean by the term 'compost', except I'm not sure what you mean by 'standard' compost - I'm assuming you mean potting rather than garden compost from your heap or bin.

I'll just make this an answer instead. Potatoes need ACIDIC soil. So your peat moss would be fine to add to your garden soil to lower the pH. This bag looks fine but I never use garden soil in pots/bags. Is garden soil in your soil mix? If you've got spores of late blight in your soil from growing tomatoes/potatoes that would be a possible reason your potato tops are going down too quickly. How long was it before the tops went down after planting?

Potatoes are one of the first vegetables to 'be done' in our gardens. The tops flower and soon after go downhill. I leave the tops and reduce watering when this begins. You SHOULD have had decent sized tubers.

Bamboo understands the weather over there far better than I. Potatoes need warm soil but not too hot to grow. Your compost, if DECOMPOSED completely is great but I'd just keep topping the soil with a few inches of compost to feed the soil and don't worry about MIXING soil. If you used raw manure, that would have truly fried anything trying to grow. Do you use a fertilizer as well? Have you had any soil tests or a decent tester for pH?

Since you are concerned about growing in a small space, it is easy to grow potatoes in the garden and not waste space. Double dig an area to get air into the soil. It will be naturally raised. Plant your potatoes and get a circular cage of welded wire anchored around your potato seed to grow vertically. As your potato grows, add straw and leave 6" of topgrowth, the green above the straw. Continue to add straw as your potato grows keeping at least 6" or more above the straw. The potatoes will fill your cylinder (18" max in diameter, I've done 12" and at least 2' high). Regular water but not a lot. I also use a concoction of bacteria/mycorrhizae/compost tea to feed the soil...BEFORE I plant potatoes. I used a light multi purpose fertilizer once but that was it...this year I used 7-4-5. Next year I am going to make sure my fertilizer will have less nitrogen and more P and K. I had to work to get the pH of my soil in my greenhouse beds to become more acidic...5.5 - 6.0 and all my soil is 6.5 - 7.0. Easier to raise pH but lowering it takes time and should be done before planting and not after. Your bags are very similar to those cages. My potatoes were DONE, the tops yellow and beginning to go down by the end of July, I planted early May. Does that sound about how long you were growing? My potatoes are perfect this year...Huckleberry, German Butterball, Purple Molly...a few others...got 7 different varieties. Our growing season here is ridiculous (my opinion)...had a major freeze the end of July and then two more in the first week of August. I have to get a climate controlled greenhouse here. Oh, the agony!! But potatoes I got. The few potatoes I accidentally left from the year before went nuts and I allowed a few of those to mature.

Now I have to figure out how to store all these potatoes. Freezes too deeply here to leave in ground, sigh. So on to building a root cellar. Please send a picture of all those alliums! What exactly is the compost you are using? Get a base line soil test for your garden soil as well as the soil you mix. Gees, if it costs an arm and leg, send your soil to me and I'll get it tested for very little...send a history of what you've been growing in your garden, make sure you consider rotating 'crops'...and when did you plant your potatoes and how long before the tops started to go down? Seed potatoes right?

Not the answer you're looking for? Browse other questions tagged potatoes or ask your own question.

18
Why would healthy potatoes come out tasting dry and crumbly?
30
Is it necessary to purchase seed potatoes?
6
Black spots, curling leaves on potatoes, help identify problem
4
Potatoes outgrowing bag - too high to hill/earth up
5
Why are my Yukon golds wilting?
6
My potato plants don't seem to flower - when should I harvest them?
2
How to grow potatoes vertically in stacked beds?
1
Growing potatoes in a bag yielded very small potatoes
17
Do potatoes produce seeds that you can store and/or replant?
3
Possible to grow sweet potatoes in towers?