How to save this blue cactus?

I am unaware of what type it is, I bought it at Wal*Mart, so I was rather suspicious that it had been improperly stored, but I don't know.

The base seems very rotted, which I think means that I need to try my luck with cuttings [tips?]. The soil is moist, and I left it in that exact spot for the past two days. Plenty of sun, no rain, only the morning dew. It's not cold enough for frost [If anything, it's in the 80s]. The nickel in the photos was for size reference, if that helps anything 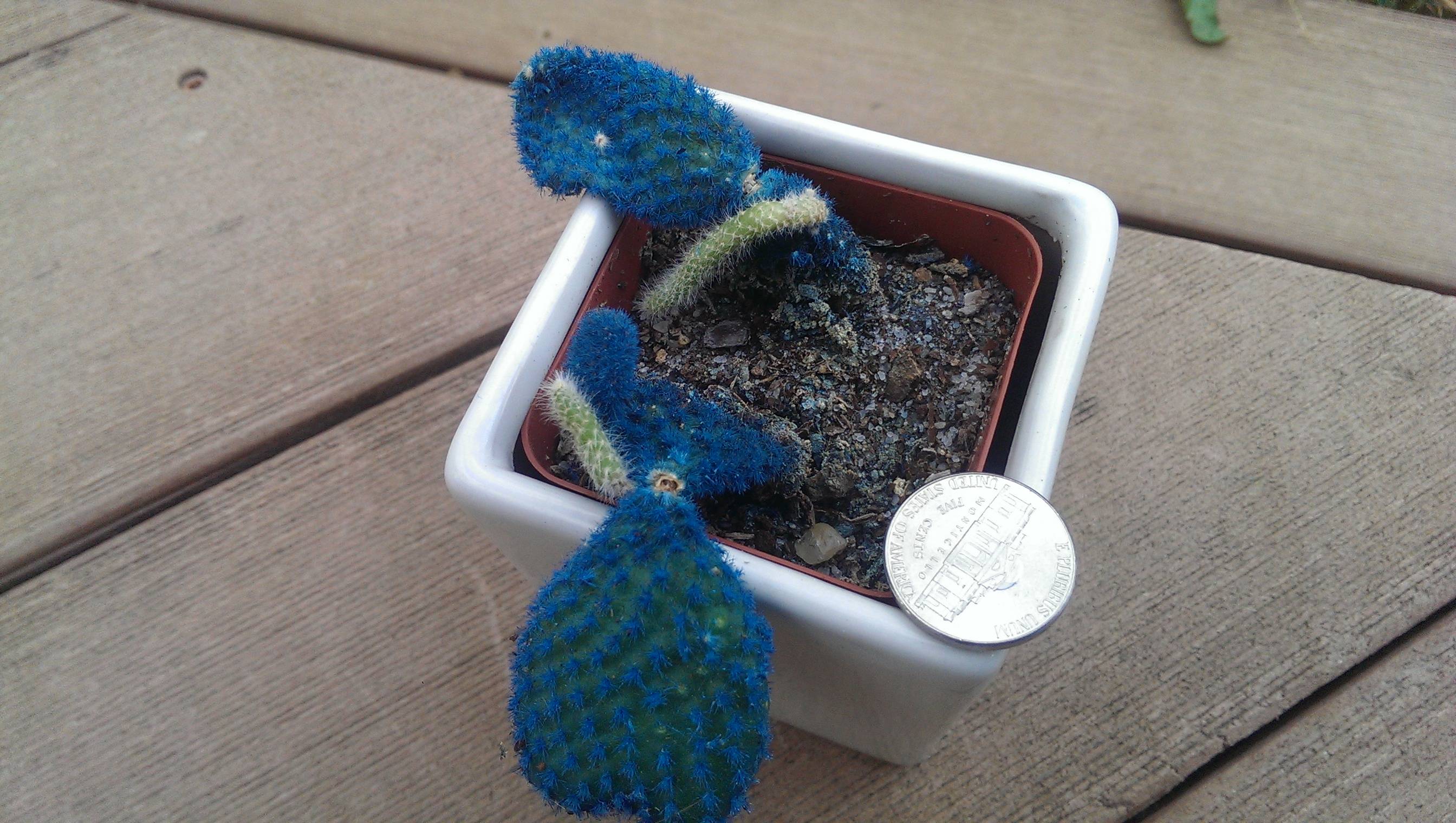 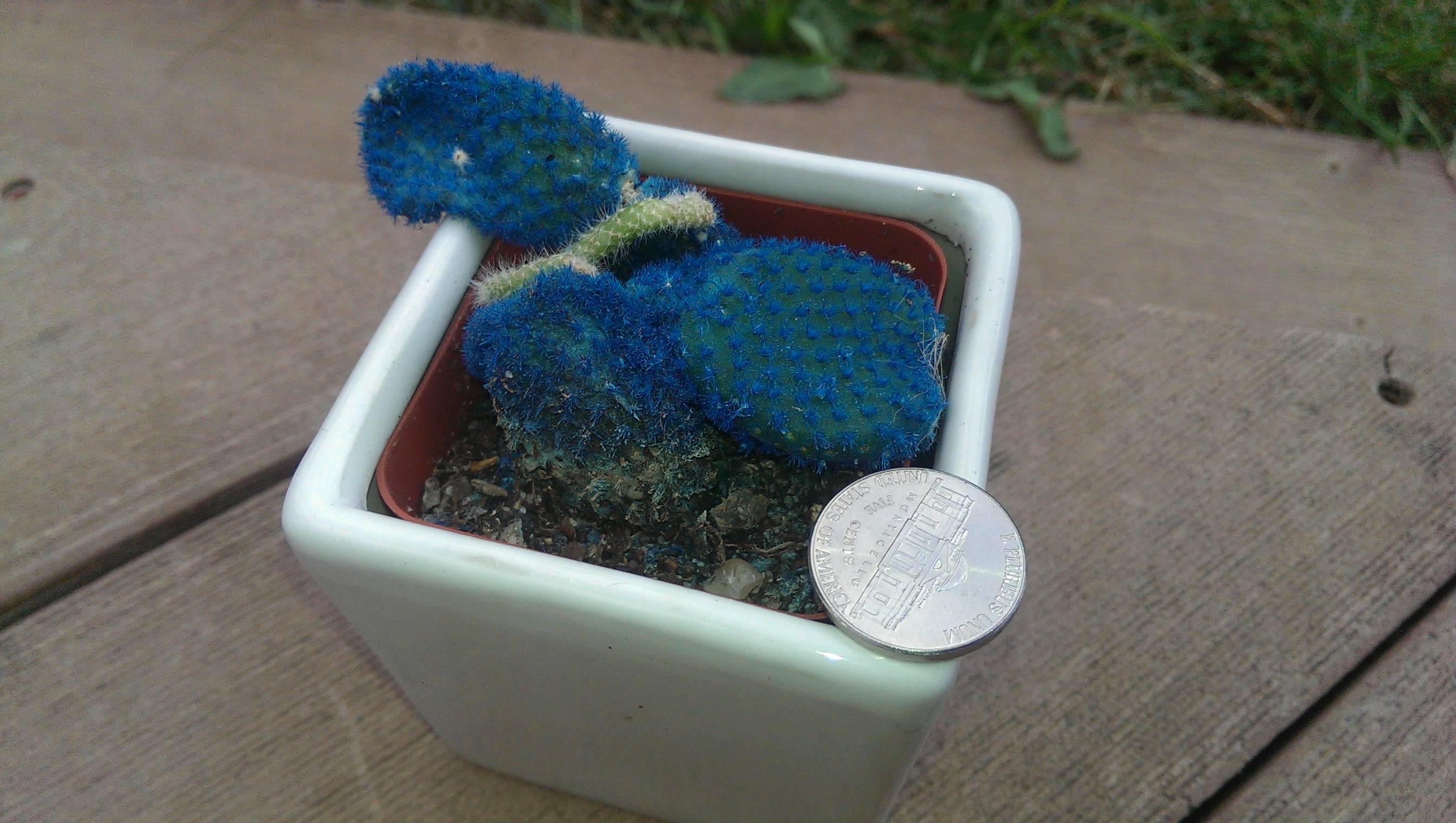 I actually saw some of these in walmart, just the other day. They kept them with the Living Trends succulents and cacti. The blue color is just paint or dye. They had the same type of cactus painted many different colors. It's like when they glue the bright plastic flowers on top of the little bulb like cacti and people buy it thinking it's real and it'll keep blooming like that.

I don't know what kind it is and Bamboo might be correct. From what I saw, the little green fingers are just really weak growths that tried to come off of the blue painted parts, but didn't do well, thanks to the poor lighting and water on a walmart shelf.

As for fixing it, the first thing I'd do is to repot it with appropriate soil. I see a lot of cacti and succulents that get potted in something like sphagnum moss, because it holds water and they want the plant to live as long as possible on the shelf till someone buys it, regardless of how healthy it is when they do. It's in the vein of the little succulent/cacti pots you can buy that have several varieties and have white rocks on top. They glue the rocks on top so they don't fall out during shipping, but it restricts the plant growth and prevents water from getting down to the soil. Another example are orchids in decorative pots. You'll often remove them after blooming and find they're actually in a tiny pot that has been stuck in the decorative pot and had filler stuffed around it. It's pure marketing and they're trying to sell as many as possible with no regard to the plants welfare.

It's possible that you have good dirt, but even if you do, chances are that it's either hard packed or has had all the nutrients leaked out. I like to buy a cactus mix and then work in some extra perlite. I keep a small bucket of the mix for planting new cacti/succulents. I would put on some gloves, gently remove it by squeezing the plastic pot, remove what dirt will easily come off without damaging the roots too much, and then repot in good dirt. You may have to prop them up with a chopstick or something.

I also think you have and opportunity with the piece that's almost broken off in the picture. It looks like it's broken off pretty cleanly at a joint and has already dried. I'd snap it off, prep another small pot and lay it on top of the dirt, preferably so dry end is either slightly under the dirt or in firm contact with it. If you use a squirt bottle to soak the top layer of soil down anytime it looks dry, you'll eventually start seeing little roots coming out of it. I've been doing a lot of this with succulents recently. I almost lost some Christmas cactus cuttings, because I thought the roots were going deeper than they were. I was letting it dry out a little between waterings and one of them started to shrivel. I checked it and found the roots were very, very shallow. After that, I started misting it every day and it started to flesh back out. It's now growing well and has several new 'leaves'.

The cactus bulb will provide a lot of the nutrients and water to get the roots started, but once they are you'll need to pay close attention to it. Once grow out pretty well, you should start to see baby cactus coming off of this and growing upright. I would wait for that. You could always plant the bulb upright, but if you do, a lot of the new babies come out from the base and they'd probably be buried too deep. Good luck and I hope this helped.

It's quite hard to work out exactly what is in the pot - the drooping blue pads are some kind of Opuntia which has been dyed blue, so the usual clues as to the variety are missing, because they're related to the colour of the spines and the colour where they originate on the pads, so its impossible to tell quite what it is. What's really odd is the other, green finger like growth. I can't tell whether its coming off the pads, or is growing separately from below soil level - that growth actually looks like Peanut Cactus (Chamaecereus silvestri), but that wouldn't grow from an Opuntia. I suppose its possible there were two different plants in the pot originally, hard to say, and I'm no cacti expert.

If no one else comes up with a better answer, I'd be inclined to leave it alone, without water, and see what happens, unless any rot you can see starts to spread, in which case, remove the affected parts (meaning leaf and stem).

This is most likely an Oputia microdasys. They don't grow this color in nature. There are rufida (red) and albispina (white) varieties or subspecies. I've also seen spray painted Mammillaria vetula ssp. gracilis in local storess

I agree with the other advice to take the pad that looks broken off and pot it either separately or in the same pot. If any pads are dry and crispy throw them away.

I suspect that the "normal" colored appendages are caused by lack of sun. These plants grow outdoors in direct sun here in AZ. They need lots of sun for normal growth.

As far as watering advice goes, use tap water. If you want to spiff it up, let it sit before using for 24-48 hours to off-gas the chlorine. If you want to get even fancier you can test the water and acidulate it to 4.5-5.0 Ph using either white vinegar or citric acid (or your personal favorite acid, except hydrochloric).

One other thing to keep in mind is that many of these Opuntias make most of their growth in the spring. Sometimes a little in the fall. They will root any time but don't put on new pads except in the spring.

If this one doesn't work out, let me know, I'll send you a box of them. They aren't naturalized in my part of AZ, but are common as a landscape plant.

I don't care for them because the glochids are numerous and loose. Spray them down with water before leaf blowing near them outdoors.

I am so BUMMED this is dyed!!! Poo! My concern is your two pot thing. Even if you water correctly and allow to dry, if there is water that the inner pot is sitting in, NOT GOOD. Get the inner pot out of the pretty white pot. Water sitting at the bottom causes these cacti to rot. These guys have very shallow roots as they have evolved in country that rarely rains and when it rains it is usually just a little bit. So the roots stay shallow because the best chance of finding moisture is very shallow. I'd get a shallow, clay pot and use sterilized cactus soil. A pot not much bigger than it is already in. But wait, take the original pot out of the white pot and allow to dry out and see if it'll live before transplanting. DYED? I gotta ask about this...oh, don't use tap water, either for watering! Get distilled water, goes a long ways. This blue cactus MIGHT make it.

5
Cactus and Succulent in the same pot
4
Determine the ID of this cactus
2
What is wrong with my cactus?
5
What kind of cactus is this?
2
Help revive cactus?
1
can I save my cactus?
1
Can I Save My Purple, Skinny, Lopsided Cactus?
2
Help identifying this weird cactus
3
Please ID this cactus species