Why isn't this vine blooming any more?

This vine (I don't know its name, if you can tell me, that'll be great) was blooming with yellow colored flowers when it was merely 9 feet long and was planted in a pot. But later, I planted it in the ground for better growth. It's growing well, and now it's more than 20 feet long but it hasn't had a single flower on it since last year.

Can anybody shed light on what the problem may be with it, and how can I get it to flower again?

A few more details: I am from India, its quite warm (actually hot) here. This vine (or climber) is planted outside in ground. It get direct sunlight, around 3 - 4 hours every day. Rest of day its in light but not direct sunlight.

As fertiliser, I gave it dosages of Humic and Amino acid blend with farm yard manure. But I am not regular about fertiliser dosage. 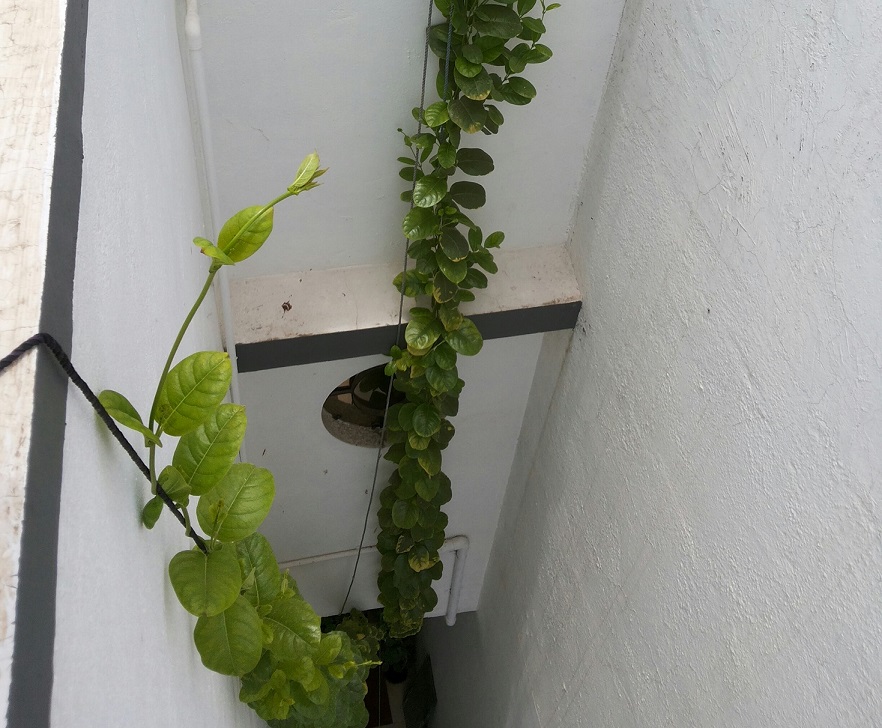 This appears to be Pentalinon luteum (also known as Urechites lutea or commonly, yellow Mandevilla, which it isn't really, but it often gets called that in the USA). It likes at least 6 hours of sunlight a day, isn't entirely hardy so anywhere that gets frost it won't like, and flowering time is really any time temperatures are high enough and sunlight is freely available. It tends to put out a few flowers quite often rather than masses all at once. It likes poor, free draining, preferably light soil and is drought tolerant once established - grows upright at first, but later will scramble and climb through other plants.

Stop feeding it is my advice - it likes poor soil, so feeding will actually discourage flowering, and it also sounds as if it needs a sunnier spot than the one you've provided.

And a word of warning - the plant is toxic so don't eat it, and be careful of the sap, which contains latex - it can be a skin irritant to some people.

Very healthy!! What are you using for fertilizer? Make sure the Nitrogen is less or equal to Phosphorus and Potassium!! If this is indoors, I'd use Osmocote, 14-14-14 for vegetables and flowers. You'll only need two little applications per year. You must have great light for this guy to be so green and compact...otherwise, purchase a grow light for the winter short days. Allow to drain well, only use sterilized potting soil (with mycorrhizae and bacteria included), never allow water to sit in saucer and purchase distilled water to water this plant. Don't use tap water!! Too much nitrogen puts your plant into a vegetative mode...lots of leaves, little reproductive growth.

Not the answer you're looking for? Browse other questions tagged identification vines flowering or ask your own question.

3
Can anyone identify this vine?
6
What is this vine (with purple flowers), and can I transplant/spread it?
3
What size, and how far apart, should support posts for a trellis tunnel be?
8
Why isn't my hydrangea producing flowers?
6
What grows/flowers like trumpet vine, but isn't?
8
Fast-growing vine, supposed to be a flowering plant
2
What is this vine?
8
What is this unusual flowering vine?