I have some cucumber plants (sorry, not sure which type), with a couple in a large, long pot, and one other in a small pot by itself. The plant in the small pot has a reasonably-sized cucumber, about 5 inches long, while the other plants are struggling to grow smaller ones. I live in an apartment in Southern Canada, on a high floor, and the plants are on a balcony facing west. They get a lot of sunlight in the afternoons and evenings.

The plants started off well, with some white around the edges from an early frost, but they grew quickly through the late Spring and early Summer. However, within the last several weeks, the leaves have undergone a drastic change, turning yellow and white, drying out, and then dying. All the leaves, especially the older ones, and now the newer ones, are shriveling up and dying. At this point, all the leaves on the solo plant are like this, and the other plants' leaves are only about 75% green. There's also a yellowish powder on the old leaves when I rub them, but that could simply be part of their decomposition.

Is there anything I can do for my cucumber plants? Like I said, they get an abundance of sunlight, and there's been little rain (I water them once in the morning). I occasionally give them a general fertilizer (20/20/20), which helped my tomato plants bounce back but hasn't done anything for my cucumbers.

I briefly had spider mites on one of the plants, but several days of spraying insecticide soap seemed to kill them. The photo below was taken around the same time. 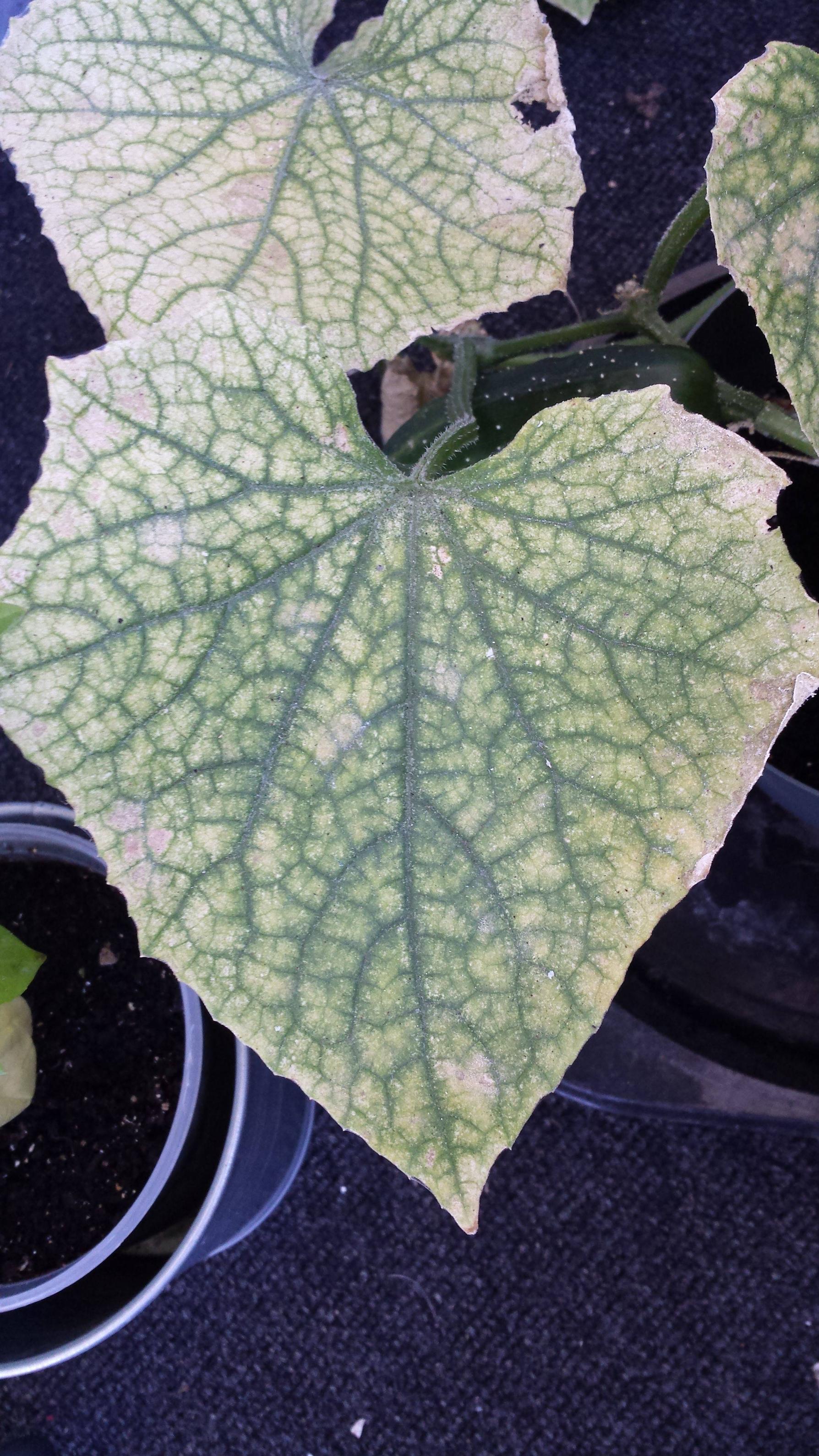 The strong green veins with white in between indicate a lack of Iron. I used Iron chelate to treat this in other plants.

Is it possible that it's a form of https://en.wikipedia.org/wiki/Powdery_mildew ? We've had this problem in humid, warm weather, but the yellow/white aspect was more apparent than in your photo.

We dilute https://en.wikipedia.org/wiki/Bordeaux_mixture with baking soda and spray very lightly. Unfortunately, it must be applied before the plant has caught mildew.

If your fertilizer didn't work, then I agree an iron chelate would be good. This is definitely a low-nitrogen uptake problem. Could be the pH is off...do you know what the pH is in this soil? Fertilizer is important for all plants in our care. We screwed up or are forcing non-native plants to grow and fertilizer is critical to add to our soils. Very carefully! Fertilizer IS NOT PLANT FOOD. It is simply chemicals necessary for the health of the plant. Plants make their own FOOD. Spider mites usually get going on stressed plants without overhead watering. Use your hose to spray beneath the leaves. If you've still got mites I'd use something a bit stronger than soap. NEEM is a great choice. Spray UNDER the leaves. You'll have to wash your cucs before eating but NEEM will get rid of sucking spider mites you don't want on other stressed or yummy plants.

Can't tell if you've got powdery mildew by this picture but it is prevalent on cucs and squash right now. Spray milk 9:1 (1 milk, 9 h20) and this truly works very well. What are you doing to build up your soil? Have you had a soil test? Growing edibles is a great skill! Especially...nowadays. I'd find a great organic fertilizer to grow vegetables (lower or equal nitrogen in comparison with Phosphorus and Potassium)...slow release to use in the future. I like powders versus liquid. I don't have to consider overwatering to fertilize. And watering every day IS NOT GOOD!! Allow soil to dry out a bit before watering again. Make sure you use sterilized potting soil to plant anything in pots...no rocks or gravel at the bottom! Lift bottoms of pots off surface with tiles, pot feet or whatever to enhance drainage.