What is this anomalous growth on my oak leaf?

I found an interesting lesion on an oak leaf in my back yard (Upstate South Carolina). What is it? I am asking about the marble like structure since I am fairly certain that the larva (shown at link) belong to an acorn weevil. 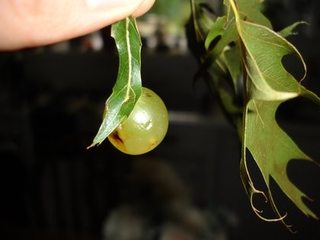 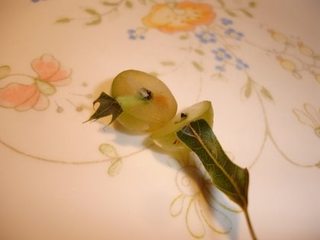 It looks like a oak apple gall, a leaf gall commonly caused by the larva of a wasp (Amphibolips confluent and others). The larva lives inside, both causing the gall and feeding off it. Eventually, it tunnels its way out. When the gall matures, it turns reddish (apple-like) and then brown.

According to Insects That Feed on Tree and Shrubs by Warren Johnson and Howard Lyon (1988), many other insects in addition to the gall maker, the wasp, feed on the gall. Apparently, it is tasty. So who knows what you may have found inside. They also mention that the oak apple gall "does no measurable harm to its oak host."