Why are my Vinca and other potted plants wilting, despite following care instructions?

Some days ago I posted some doubts about my Vinca (probably a Catharansus rosea) because it started to look bad. After taking care of it as told, it kept getting worse. The same thing happened with another potted flower plant I have. I asked for help at the local greenhouse, and kept the instructions, but it's not getting better.

These were my flowers before: 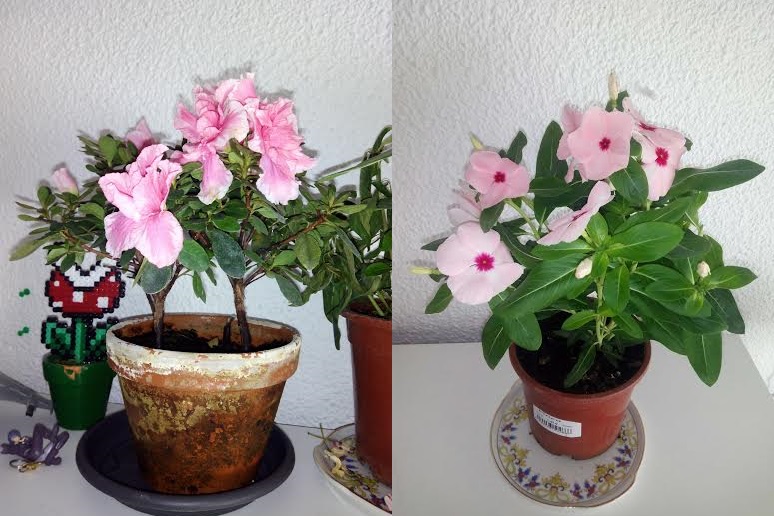 And these are the poor things now: 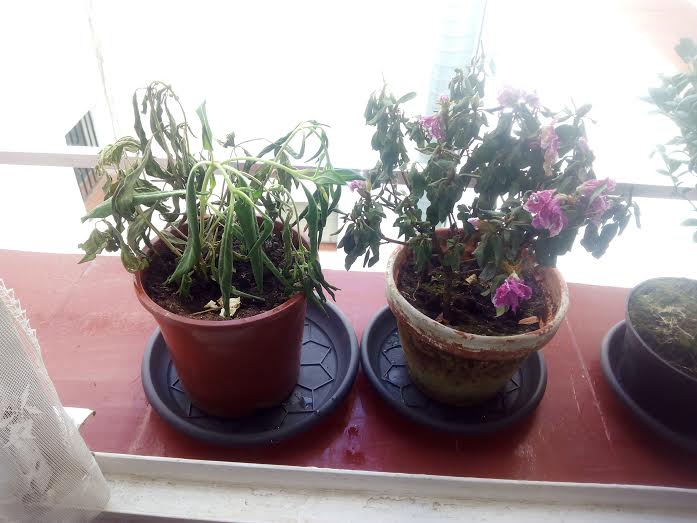 I don't overwater them. I spray water in the leaves sometimes (it's a dry summer) but not on the petals, and I take the water from the plates away so the roots don't rot. I keep them in direct sun light for about half an hour a day, and a lot longer in indirect sun light.

I'm very concerned and don't know what to do. The rest of my plants are ok, and they don't have flowers. Could it be the bad ones are more sensitive?

Well I'm confused - in the first pics, there's a limescale stained terracotta pot on the left showing two plants within - in the second set of pics, it's impossible to tell whether the same limescale stained terracotta pot still has two plants in it (which are possibly Azaleas). If it does, the pot's way too small for two plants, its barely big enough for one, and if they are azaleas, they like acid soil. I suspect its too late to save them, but it appears you've not been watering sufficiently well - two plants create a lot of root and that means they need extra water because they don't have enough room and not enough soil to hold on to any water anyway.

The only other possibility is a problem with the potting soil you used, but if you have other plants which are doing fine, its unlikely to be that. Now that they're in this state, all you can do is soak them - put them in a bowl or something and fill it up with water, weight the pots down and leave them in water for an hour. Then remove and allow to drain drown completely. IF they recover, repot the two plants into separate pots. And turn the single plant out of its pot and check whether its rootbound, if so, give it a larger pot.

When you water after this, do it when the surface of the compost feels just slightly dry to the touch, but not shrunken from the sides of the pot - water thoroughly, allow to sit in the excess for 30 minutes, then empty the trays beneath.

Looks like root rot to me even though you say you aren't overwatering. WHAT kind of soil ARE you using in these two pots?? Did you use sterilized potting soil or garden soil? Did you put rocks or gravel on the bottom of these pots? That actually creates a 'perched water table' which means no drainage until saturated and then not enough drainage will happen. The white crust on your clay pot shows me you are using tap water full of salt. Clay will show this as it 'breathes' releasing water vapor out of the sides leaving salt behind. Stop using tap water and purchase bottled water for your indoor plants. If you used garden soil you could have easily scooped up some great disease as well that is controlled in the larger environment of the garden...NOT in pots. If you used purchased mulch or non-sterilized soil you could have easily gotten a batch with lots of pesticide residue (from homeowners depositing their 'clean green' from lawns and/or soils full of pesticides with long half-lives). Also, get rid of flowers as soon as you can stomach doing so. They take an awful lot of energy that these plants will need to get healthy again, if indeed they are able. Looks pretty bad to me...sorry! Always, always use sterilized potting soil for potted plants. You can then add life back into the soil by adding mychorrhizae and bacterias or find soil that has them included. No rocks on the bottom, just soil! Get the bottom of your pots off the surface using rocks, tiles or pot feet made for this purpose. Enhances the drainage big time. For azaleas, look for acidic soil to use just for plants that need acid soils. Let us know what you discover! NO TAP WATER!! You and your plants don't need the stuff they put in our drinking water!! Good luck...

Not the answer you're looking for? Browse other questions tagged diagnosis houseplants flowers plant-care or ask your own question.

3
Why are the flowers dropping and leaves turning yellow on my potted Freesia?
3
Tiny Yellow spots on Dracaena Reflexa Pleomele. What I am doing wrong?
5
What's happening to these repotted plants?
4
Ming Aralia is turning yellow and dropping branches
4
Why are my tomato plants wilting?
0
Nerve plant with curly crunchy leaves
1
How do you make a Kalanchoe blossfeldiana bloom?
0
My Vinca plants are dying