How to make concrete blocks secure in raised bed garden

I bought some concrete blocks and laid them out like this. The aim is to build a keyhole garden. 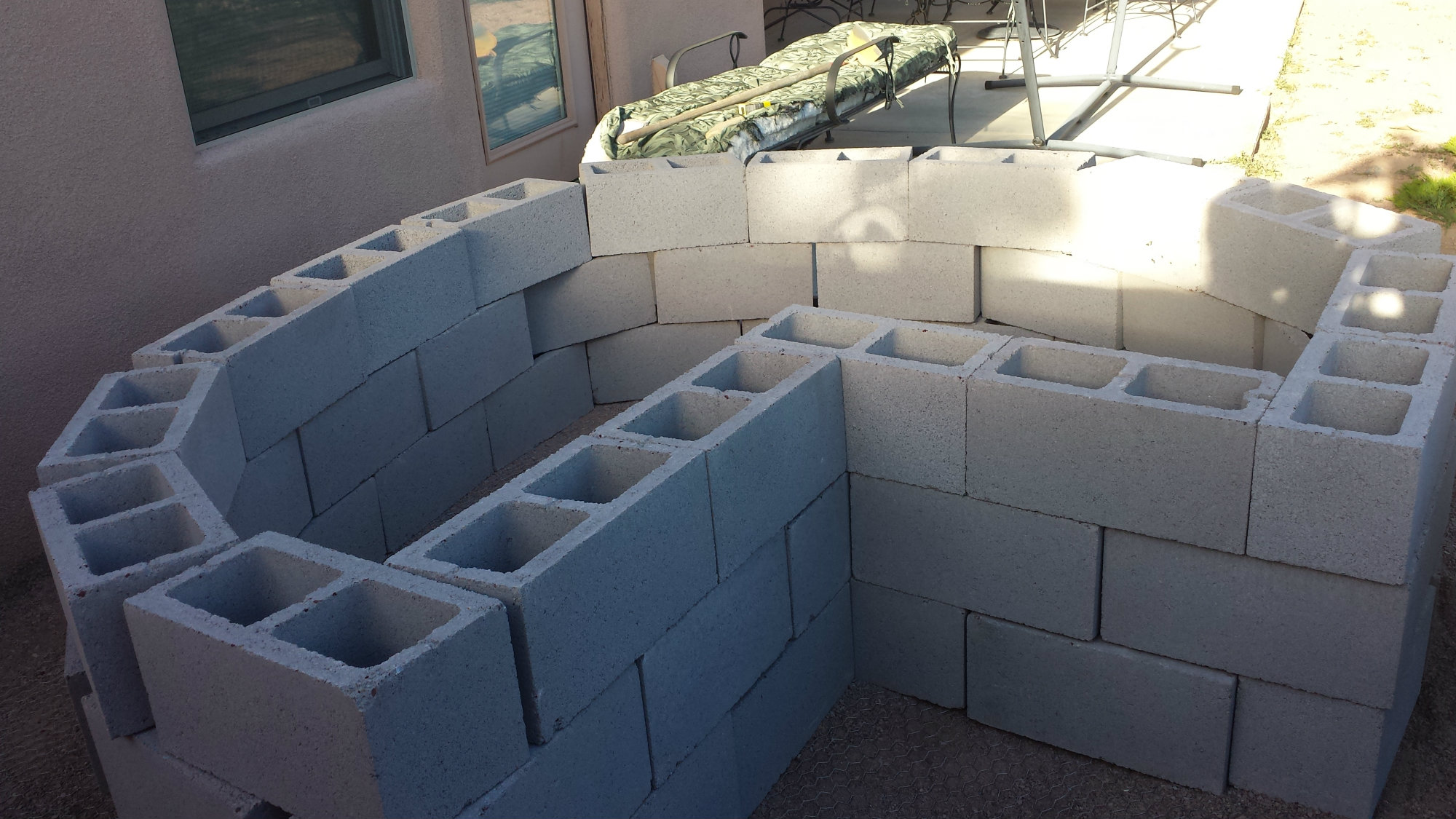 Now I'm concerned that some could fall over. I've got a very curious German Shepherd who could hurt herself if she knocked one of these blocks over. How can I reinforce the blocks? Would filling the holes with sand or gravel be good enough? What about rebar and sand/gravel? I'd rather not use something permanent like cement.

Yes, I will need to build a fence to keep the dog out but I want to reinforce the structure anyway.

I suppose I could remove the top layer of blocks. Would the structure then be stable enough?

I did see this question but it doesn't quite address my situation.

When you fill this with soil...and water this will definitely separate and blow out. You need a foundation of compacted gravel with drain pipe and at least one block depth beneath the floor of block. Rebar pounded from top of wall through gravel bottom at least 12" apart. 'Banter' blocks with each layer 1/2" towards inside of your planter (at this point to get this height which is MAX already you'd need 4 layers the loest layer is on compacted gravel footing, then one block or 3/4 block to surface, then 2 more blocks...don't do any higher than 3 blocks! anymore is pretty iffy). Mix concrete in a wheel barrow and fill from top. Keep jiggling and prying with extra rebar to get rid of as many air pockets possible while filling. This can be done with each layer but takes more proficiency with rebar. Find a friend who has done this before? Allow to cure for 2 weeks before filling with soil (purchased top soil with mulch or even bagged potting soil). Do not use garden soil. Drainage will be fine if you've got drain pipe at the footing inside your planter, daylighted downward to grade. Lots of holes in your wall to facilitate aeration and drainage. I'd find a way to CAP this wall so that one can sit on it or place big pots of flowers securely. If this design were in straight lines and 90 degree corners you'd have far more room for plants and this would be much more in line with your home, also in 90 degree angles...planters any higher than 18" are rare unless the patio is higher. At this height you are creating an area for sitting as well as being able to use for props/dinners. If I were you I'd redesign your Keyhole garden without curves. Lower your whole project by a foot and 1/2. Dig trenches, fill with crushed gravel, compact, lay drain pipe at bottom to gather water and drain out of planter. Allow one block to be laid so that at least 1/3 of block is below grade. No more than 2 blocks high off this layer of block. Go ahead and use mastic...concrete glue between blocks. Why don't you want this to be permanent? Filling with concrete and rebar does not make this totally permanent. Not tough to break up and take out. But why? Why don't you make this planter larger? Think about making a similar one on the other side of the patio!! Your patio should be enlarged as well...I'd use a Roman cobble 7X9X2 to expand out and around bases of planters. Leave room between house and planters at least 3 feet to walk upon or bring right up to house and leave a foot of space away from stucco/siding and at least 4" below siding should be free of soil/gravel to protect siding. Gravel you intend to walk upon should be 3/8- crushed or smaller. And compacted. Do not get tempted by any color!! Always use ONE color, preferably dove gray...

As for plants...because of the concrete your soil will have an alkaline pH. Do not try to grow acid loving plants in your planters or even near your foundation. You CAN but you'll have to test for pH on a regular basis and make sure your soil is acidic enough for the plants. There are ways to lower the pH for acidic soil loving plants.

I know you are thinking that if you have to go to this much trouble...well, I would go check out CMU walls. Concrete Modular Units...grin!! Lots of more...authentic rock wall looking concrete blocks...even in Ashlar patterns meaning some vertical units as part of the wall. Concrete caps, a lighter gray than blocks if possible... 2" thick are designed to use with these walls. One can even design curves that will have concrete caps made in their radius. And the blocks you have already purchased make for a great foundation for CMU blocks.

Looks to me that you have a stucco sided home? Using your concrete blocks you should be able to do the same siding for your planters. This truly pulls your home into the garden and would look very professional. One way or the other but your concrete block wall as you have it and one block lower, will look ok if you do at least one more planter like it on the other side of the patio. Those concrete pavers to extend your patio would pull it all together. The pavers need to be set on compacted gravel then sand butted up tight. No spaces!! You'll still get a few weeds between pavers but oh so easy to maintain. They'll need and EDGE and the guys that sell these pavers can direct you...whatever you do DON'T SKIMP. This done correctly will amplify the value of your home more than a brand new kitchen or bathroom. I kid you not...

Of course, the best solution would be to use some sort of motor (like cement) or construction glue. But if that's not an option (and assuming that you're going to fill the entire thing with dirt), consider "insetting" your blocks as you fill the area with dirt. (first layer block is at your starting position, the blocks on top of that are about an inch or two in, third layer is another inch or two in from that, etc.)

This way, the blocks are "leaning in" onto the fill dirt, then fill the holes in the blocks with dirt/sand/whatever.

Another thing that you might try, is to periotically place a block sideways into the center of the garden (so that half of it is in the wall, and half is buried under dirt- these are some times called "dead men").

All of this, however, will probably not stop a very curious dog who wants to actively dig, or try to pull over the wall (If your dog is anything like my dog is, it seems like sometimes they are TRYING to ruin everything!)

Another idea: Maybe you can drill holes through the blocks and have some sort of backing board to fasten the blocks to...

Unless you secure the blocks the weight of the wet soil will slowly push them out. It appears you are building this on top of cement slabs so you will have to deal with water wanting to go somewhere from the bottom of the stack. Some suggestions:

Lastly, what are you intending to grow? If it's vegetables you only need 12" of soil depth. If you are growing perennials/shrubs or trees you need something that is stronger as root action will push the blocks apart.

Not the answer you're looking for? Browse other questions tagged raised-beds concrete or ask your own question.