Why is one fernbush thriving and one not?

I bought two Chamaebatiaria millefolium
(Fernbush) online. Live in zone 9. plants are in south facing backyard 6-10 hrs sun. I followed the instructions and water both semi-daily, planted in sandy well-draining soil and amended with a small amount of compost. I followed customer service advice to gently remove brown dried leaves too.

One is in the ground while I haven't prepared garden bed for other yet.

Why does the potted one look like its drying up? 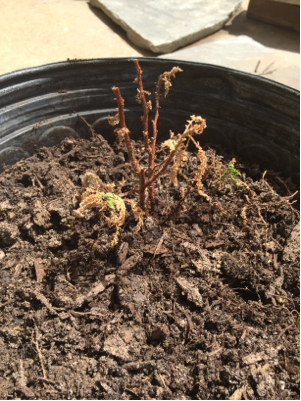 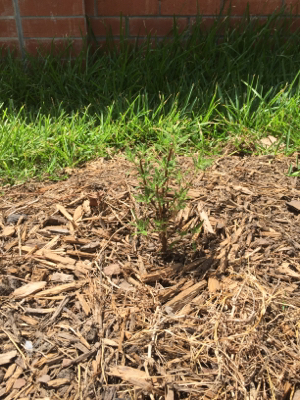 Probably because it is - although this is a desert type plant, coping well with dry conditions, when its newly planted, it does need watering deeply at planting time, and probably 3 or 4 more times in summer. In a pot, its more likely its dried out than in the ground, where its got a nice mulch to keep moisture in. I'm assuming there are drainage holes in that pot and it's not standing in something that keeps the water in; if this is not the case, it might be the opposite problem, too much water at the root.

The only other possibility, and this may not be relevant depending on exactly what you used, may be related to the soil you've used in the pot - was it soil you bought or soil from your garden/yard which you amended with compost? And this 'small amount of compost' you used, how was that produced? Using a hot aerobic method, so that its pathogen free, or a cold system? If it was a cold system and you used your own garden soil, there may be some pathogen in the soil that's affecting the plant. This wouldn't matter in open ground, but it does matter in a pot, where there is restriction of movement for bacteria and pathogens, so that they're more concentrated. It's a low risk, but still a risk.

Not the answer you're looking for? Browse other questions tagged watering containers dryness ferns heat or ask your own question.

42
How to prevent avocado from drying out indoors?
16
Why would healthy potatoes come out tasting dry and crumbly?
3
Why are my tree ferns' leaves drying out and dying?
5
Why is my fern wilting and drying out?
4
Why should you usually not place pebbles, rocks etc at the bottom of a container?
3
Why are my houseplants dying off one by one? (Peace Lilly, Dracaena, English Ivy)
6
Why is my palm tree not coming back to life?
6
Can you use the leftover water from watering one plant to water other plants?
3
What are these patches of fluffy white growth on this young apple tree?