How to keep pine trees small

This is a picture inside Montreal's botanical garden at the entrance of the Japanese garden. In this picture we can see 5 small pine like trees along with thyme and rocks.

I would like to recreate something inspired from this. How can I keep pine-like trees small like in this picture ? 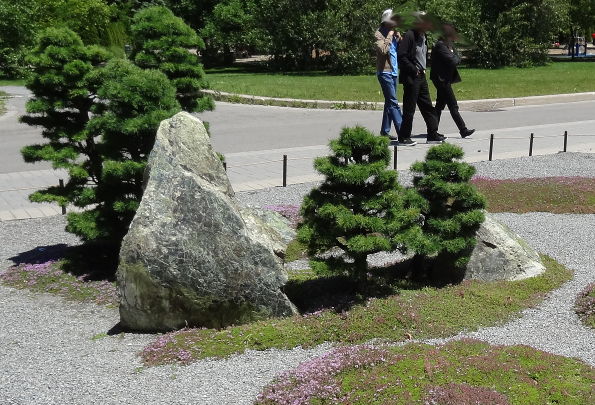 What are the best way(s) to achieve this effect ?

I am not able to ID those trees but do you know Bonzai? It is the art of total control over trees in particular. Special pruning and manipulation of the environment to keep trees small and ordered. Being able to do this shows that one has sorta kinda mastered the way to keep a plant healthy yet small and formally pruned. Once this is accomplished either in a potted environment or a Zen garden, to continue this manipulation requires major commitment and constant vigilance. It is the gardener who is in charge of the life of the plant not nature. It is a huge undertaking. But great test of botanical knowledge to be able to do this in ones landscape.

These are not Bonzai but the idea of maintenance is close. Pruning should be done professionally twice per year. Forget to prune, water correctly, watch for signs of problem insect/disease, fertilize correctly...well, it will look like ugh.

You can purchase these trees already formed in a topiary. With some hands on instruction and GOOD tools, you most certainly can be successful maintaining the formality and health of trees/plants like these in your picture! Not necessarily cheap or easy. But worth every second and dollar you spend. What you learn will make sure your gardening skills are honed.

You could search out smaller or dwarf varieties (such as a Mugo Pine for example) rather than plant traditional "pine trees". This gives you a leg up on the battle. Then treat/prune them like other Topiaries.

There is a significant difference between bonzai and topiary. One is simply shaped/pruned and then maintained, others are carefully groomed and manipulated over time to mimic the natural aging process.

Though a bit aside, ‘bonsai’ means a tree in a pot. Similarly treated trees in a landscape are ‘niwaki’. The esthetics of each differs, but the maintenance of pine trees in either setting relies on the same underlying pruning principle (see Thimann and Skoog via Google).

Needles are arrayed in groups called fascicles. There is a latent bud at the base of every fascicle. A number of these can be released by pruning the stem, removing only a portion of the foliage. These will then develop into new branches; the branch line is split into two or more, depending on how many fascicular buds developed into new stems. This ramification of the stem can quickly become very congested and unhealthy, so the common practice is to limit it to two new branches and, once those exist, remove the original stem end in the middle. This builds a structure of one stem leads to two (season 1), two becomes four (season2), four becomes eight and etc. Of course, there are occasions that only one new stem induced, maybe even none once in a while. The ramified structure of the foliage pad, though, provides a means to cope with this.

Any pine can be treated this way to maintain its size. Were no pruning done, the buds at the branch tip would extend each season quickly enlarging the tree. By pruning, the new growth is forced to emerge further back, toward the interior of the tree. It radically slows the rate of the tree getting bigger, but it inevitably will get larger.

This is typical of ‘white pines’. Other pines will also release buds on the bare stems at the interior of the tree as a result of the pruning. In bonsai this is referred to as ‘back budding’. As long as these ‘back buds’ get light, they can be developed into another ramified branch that can replace the existing when it desired to do so. Clearly, with these species, the tree can actually be made smaller!

Not the answer you're looking for? Browse other questions tagged trees bonsai pines or ask your own question.

6
Can I allow a pine tree to share root space with a group of birch trees? If not, which should I cut down?
6
Pine sawfly eradication once and for all
6
Trees in narrow space behind retaining wall
4
Help growing a pine seedling
3
Can you grow (and keep) a large maple tree in a container?
2
What's wrong with pine tree?
0
Is this Christmas tree?
1
What type of trees are these two?
2
Questions about white pine bonsai
3
Oak sapling in pot is not branching