Can anyone identify this plant/weed that has a curled-over top with little white flowers?

Asking from New Jersey. I have a couple of these little flowering plants growing in my front yard, one in a small area surrounded by stargazer lilies and another across the yard between some ivy and a tree. The flowers just opened up within the last few days (the lilies haven't opened yet). The leaves look similar to the lily leaves, so much so that I thought it was another, smaller lily until it grew that curled-over bud cluster. It's about 12 inches tall.

Here are pictures, some of the plant in its normal curled-over state (the surrounding, taller plant leaves are from stargazer lilies), and one with me holding up the flowers to get a picture. EDIT: I added a couple pictures from other angles. 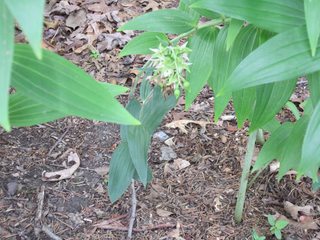 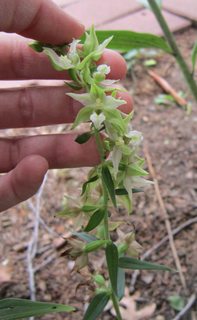 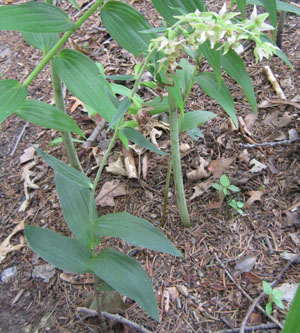 After some extended internet research, I think this may be something known as weed orchid, or broad-leaved helleborine. I found a New York Times blog article about it: http://cityroom.blogs.nytimes.com/2013/07/12/an-orchid-disguised-as-a-weed/?_r=0

Yes it is an Epipactis sp, I am not pretty sure for E. helleborine as mentionned in the "cytiroom blog" as the color and general shape of the flowers don't match well with E. helleborine, nor the leaves...

I concur, the image seems to be of a Helleborine Orchid. In regards to a previous answer please note:

Epipactis, or Helleborine, is a genus of terrestrial orchids consisting of approximately 70 species. This genus is abbreviated as Epcts in horticultural trade.

Additionally there are 13 subspecies within the Epcts genus itself. As you can see on wikipedia this plant is known to grow within the region reported.