Why are my tomatoes tasteless?

I have a taste problem this year with my greenhouse tomatoes. I've grown a mix of varieties (moneymaker plus a couple of others) indoors and they've all come out nothing like as tasty as in previous years.

Now my cherry tomatoes grown outdoors taste superb. Tasting the cherries with their "burst" of flavour, then the indoor ones is a reminder of how poorly the latter have done.

Don't get me wrong, they don't taste of "nothing" like supermarket tomatoes. They're slightly better than that. They just taste a bit dry, a bit mealy/floury. Certainly they're not very juicy.

They're OK to look at (click for larger photo) 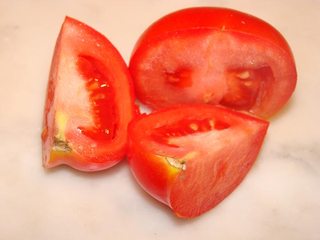 What could I have done wrong? The following all apply:

But before you jump all over those "errors" all of the above have applied in previous years and yet I've had superb tasting crops nevertheless up till now.

The only thing slightly worse than normal this year, is I've noticed a greater than normal amount of leaf curl but this question & answer seem to say that this isn't a great concern.

This hasn't been answered yet so I'm going with the most likely causes and you can derive the most likely out of those. Sorry I can't be more specific, but it would probably depend on really localised variables given your cherry tomatoes are so flavourful:

For more ideas, see an excellent set of tips at SelectedPlants.com whose section on tomato flavour I'll excerpt here:

What are the best tips for getting the tastiest tomatoes?

Genetics is the first and foremost consideration. Growing a variety that does NOT have the genetic capability of making good flavored fruit is a hopeless cause. Brandywine (Sudduth) is well known for producing very good flavored tomatoes. Big Beef is a hybrid known for decent flavor. What sets these apart from the average bland hybrid such as Celebrity?

Very high nutrient levels in the soil is linked to better flavored tomatoes. This is because the plant has all the nutrients it needs to produce the plant and to mature the fruit. The very best tomatoes I ever harvested were the year I put down a layer of rabbit manure 4 inches thick and then planted tomatoes. The vines were 15 feet long and fruit production was incredible. Flavor was off the charts. Note that the nutrients must be in balance. If nitrogen is too high, flavor suffers and production goes down.

Low disease and insect pressure is directly tied to good flavor. Among the worst flavored tomatoes I've ever grown were Black Sea Man in 2008. The plants were hit by nematodes and foliage diseases so heavily that they were all dead before the first fruits could completely ripen. Other varieties growing beside them were fabulous, in fact, Strawberry Margarita became one of my new favorites.

Reducing water as the fruits ripen is a well known manipulation to get sweeter better flavored fruit. You can achieve the same effect by improving the nutrient status of the soil so the plants are growing healthy with a high foliage to fruit ratio. You get more fruit as a bonus.

Temperature is a partial contributor to flavor. The only time I've had bad flavored tomatoes linked to temperature was when I had a very late fall crop that matured fruit when night temps were down near freezing. There is a distinctive flavor transition point near 50 degrees (nighttime temp) where fruit that matures at higher temps tastes better and fruit matured at lower temps tastes bland. As a general rule, temperature is not a major contributor to bland flavor except very early and very late in the season. An exception has to be made for folks in extreme climates since zone 3 microclimates are too cold for all except a few short weeks in mid-summer. In these climates, it makes sense to use hoop houses and tunnels to improve flavor.

Not the answer you're looking for? Browse other questions tagged harvesting tomatoes or ask your own question.

16
What does it mean if my tomato leaves are curling?

5
Is there a way to harvest my chilli peppers for the best possible heat?
16
Why are my tomatoes cracking and what can I do?
10
Why did my tomato seedlings stop growing after their first set of true leaves?
11
What should new tomato growers know about growing tomatoes?
4
What is the best way to pick tomatoes?
4
Why is there such a difference in size between the same tomato plant's saplings?
11
Plant recommendation for gift for kindergarten students
4
Why do I have brown "jelly" and rotten smell inside my healthy looking tomatoes?
1
Tomatoes seem to be stagnating?