I am new to gardening and I am starting out with tomatoes. I keep reading that tomatoes need support like a stake or a cage. However is there a reason why they can't just grow on the ground like pumpkins or watermelons? Do wild tomatoes grow with support as well?

Watermelons and pumpkins naturally grow as trailing vines across the ground. A tomato plant grows upright, holding its fruit up off the ground. They often need cages or stakes because the tomatoes get heavy enough to pull limbs or even the entire plant to the ground, potentially snapping the branches or stem in the process.

'Wild tomatoes' bear much smaller fruits that are easier to support. Lots of breeding has gone into making tomatoes grow larger tastier fruit. The ability to stand up under its own weight has not kept up.

Also relevant is the issue of disease and pests. A number of diseases that can damage the fruit thrive in moist soil, letting the fruit touch the ground makes infection far more likely. Also, a number of insects will attack the fruit much more readily when it is on the ground.

Another reason to cage them is if you leave them on the ground, they are more prone to fungal diseases, and you really don't want those in your garden because they are hard to get rid of. I speak from experience. 4 years later and I'm still trying to eradicate the blight spores that came when one of my trellis' fell over from a wind storm and I thought it would be ok to let the tomatoes sprawl.

In addition to the good points made by the other answers, at least in my experience, it's also important to keep the leaves and branches off of the ground, not just the fruit. Branches and leaves dragging the ground (or even hanging low enough to the ground to be splashed by soil during rain) can get Septoria Leaf Spot, which will quickly kill off the foliage. 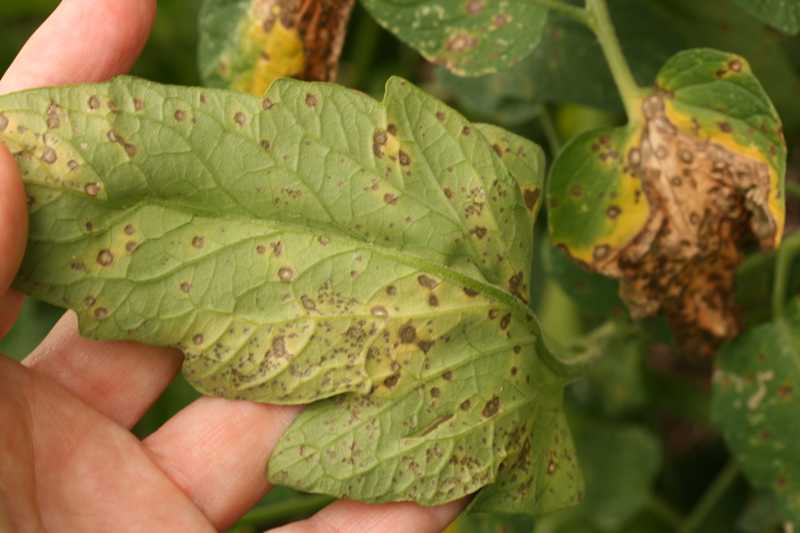 It really depends on a lot of stuff. In humid to somewhat humid areas, you're probably going to have a lot more issues if you don't stake, cage or trellis your tomatoes, because there tend to be more opportunities for fungal diseases and perhaps more harmful tomato pests in areas like that. In my area, which is dry and has clay to clay loam soil (and pretty much just aphids, cutworms and whiteflies to worry about), it doesn't cause a lot of problems. Bugs (such as pill bugs) will occasionally eat from tomatoes on the ground, but it's really not that common in my experience (in my area). In fact, when the tomatoes vine on the ground, the leaves cover the ground better to retain moisture in the soil. However, the tomatoes will be more crowded and may not look as neat, and they may crawl all over each other (or themselves) and fight for space and sun. Tomatoes can be intelligently aggressive. You may also have to search through leaves to check for fruit more. You'll likely never be able to pick tomatoes while standing up if you grow them on the ground. This may make harvesting take more effort. Some tomato plants may also grow more slowly if you don't stake them.

Notwithstanding the advantages of staking/caging/trellising, I've rarely done it, although I want to this year, since I'm growing more plants in the available space than usual. We get plenty of tomatoes when they grow on the ground. So, it definitely can be practical to let them crawl on the ground, but not necessarily in every area or climate.

I put up inexpensive 5 foot screening from Home Depot this year as a universal trellis to hold: tomatoes, cukes, squash, peas, and brussles sprouts.

End of season summary: I got about 100 cuckes off one plant, have already harvested two winter squash, and will probably harvest nearly 1000 black cherry tomatoes off two plants; all growing up that trellis. I cut back the Brandywine tomatoes a bit too much, but will still end up with about 40 off 4 plants. Zucchini and Roma tomatoes did not grow up the trellis.

The tomatillos are tricky. I grew them upright last and this year. Last year I go very few. This year I was getting few, but I cut the plant back to about 50% and some started to fill out the husks. However, my daughter-in-law took one of my seedling and planted it in her pallet garden, mostly ignored it because she wasn;t sure what it was, and has harvested about 50 full size tomatillos to my 20 tiny ones. The big difference is her's is sprawled out on the ground. But tomatillos are hard and have husks, and maybe like growing more as a bush than a climber.

Youtube shows that Hunts tomatoes grows them on the ground—100 of acres of them.

I've grown indeterminate tomatoes without cages or support. They take up a lot of ground space that way, and compete with each other at the normal caged tomato spacing. Don't get many fruit, but that might change if you grant them the room they want. Having met disaster, I've never done this second experiment.

Not the answer you're looking for? Browse other questions tagged tomatoes support or ask your own question.

16
Can a tomato plant break by its own weight?

16
How do I maintain a Raspberry plant?
14
Does aspirin really help tomatoes grow?
6
How should I be fertilizing my container tomatoes?
10
What is wrong with my tomato plants?
16
Why are my tomatoes cracking and what can I do?
18
Do seeds from fresh tomatoes need to completely dry before they will sprout?
9
"Volunteer" tomato plant in my vegetable garden - good, bad, indifferent?
2
Will a 6' circumference tomato cage work?
2
Raised Garden Bed - Catch all support system
4
Tomato plants with light spots on the leaves