I've recently become the inexperienced caretaker of four rose bushes at the house I moved into last year. I've done a fair amount of gardening but was never into roses. Anyway, I feel like it's my responsibility to help them out so I've been giving them mulch making sure to water, deadheading, trimmed them in the winter; it's been fun.

The problem I've been having is with one bush in particular. It was sort of sick looking when I showed up last year but I gave it some mulch, made sure to water it and it looked pretty happy. ...except for its flowers. They get this yellow tint to them while they're still buds and basically look sadder and sadder as they start to bloom. See picture: 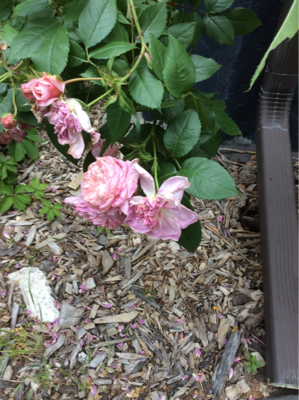 One thing that I've noticed is that there are some (but not that many) aphids on the bush. Another factor might be how wet it's been this spring but all the other bushes seem to be doing fine. Plus this guy's flowers never looked that great last year either.

Anyway, guesses would be appreciated.

It might just be that particular variety of rose - the foliage looks healthy, and there is a little evidence of rain damage and some roses are very susceptible to this, but basically, it may be one of those roses that simply doesn't produce very shapely or nicely coloured blooms. Some roses look great in bud, and when they first open out, but within a day or so have become a floppy, loose mess - it's all down to picking the right rose. This one also appears to have weak stems which are unable to support the weight of its flowers, unless its actually a climber which hasn't been tied in or supported. If ever you buy a rose, watch for the descriptive phrase 'nodding flowers' if you like your rose flowers to stand up on their own - 'nodding' is advertising speak for drooping. It may also be that your pruning technique isn't great - weak stems on roses are usually removed when pruning early in the year.

Not the answer you're looking for? Browse other questions tagged diagnosis flowers roses wilt or ask your own question.

8
What is the cause of the dead spots in my lilac bush?
4
What's wrong with my chili bush?
5
How can I get more foliage and flowers on my rose?
4
Identifying this white wildflower
3
Why did a section of leaves on my Holly bush turn brown?
3
Can a new rose flower grow from inside a dead flower?
3
Should I prune old dead sections of my rose bush while new growth is appearing at the base?
5
Is the rapid new growth on this rose bush a sign of Rosette?
1
Lantana flower blight ( not leaves)
1
Chrysanthemum not thriving outdoors; dig up? Australia