Is it okay to line the top of a container with plastic to hold water inside?

One of the problems with container gardening in my area is that you generally have to water the plants every single day in the summer (except on occasion) or else they have a high likelihood of dying from lack of water (even if you only miss one day). This is not because the plants drink lots of water. It's because the water evaporates fast. (Edit: I know because the containers dry out whether or not there are any plants in them, and I've never had mature plants in them, since they tend to suffer in those fast-drying conditions; the climate is hot and arid in summer, with lots of sun.) I imagine the containers have been between 2-8 gallons.

Anyway, I know about self-watering containers, but I'm looking for other easier and less expensive alternatives.

One idea I have is to cover the top of the containers with plastic and just have a small opening to plant the plant. That should in theory hold much more water inside. Do you think this will work? Why or why not? Have you or has anyone else tried it? Assuming there are no weed seeds, do you think clear plastic would be better than black plastic?

I'd question your assertion that 'its not because the plants drink lots of water'. When the weather is hot and dry, plants do require more water, particularly in containers - they 'drink' the water, obviously, because they're actively growing and maybe flowering, but they also transpire, which would be perspire in human beings, so of course, they're using a lot more water than they would in colder/wetter weather. Even in the UK in summer, containers need watering every day, particularly if they're situated in full sun. Some plants have special adaptations to cope with hot, dry weather - plants like aloe and cacti, which store water in their tissues and reduce or stop transpiration during the day, but other plants have no such adaptations.

I do not think putting a layer of plastic over the top means you can water less - it will mean it'll be harder to tell if the plant needs water because you won't be able to touch the top of the potting medium to see if its dry or not. It may also encourage fungal infection, and will also increase the heat within the container. You could use chippings, pebbles or bark on top instead, at least you'd be able to push those out of the way to feel the soil, but I still think you'll be watering daily.

One thing you could do is check that your plants have enough root room in their existing pots, and are not potbound - when the roots take up more than 85%-90% of the potting medium available, there's not enough soil to take up and hold moisture.

Instead of using plastic, you could use biodegradable woolen mats. They're used to suppress weeds to help trees get established, but they provide some protection against moisture loss. I just placed one now around my tomato plant in an attempt also to reduce splash back onto the leaves to reduce the risk of fungal infection from the soil. 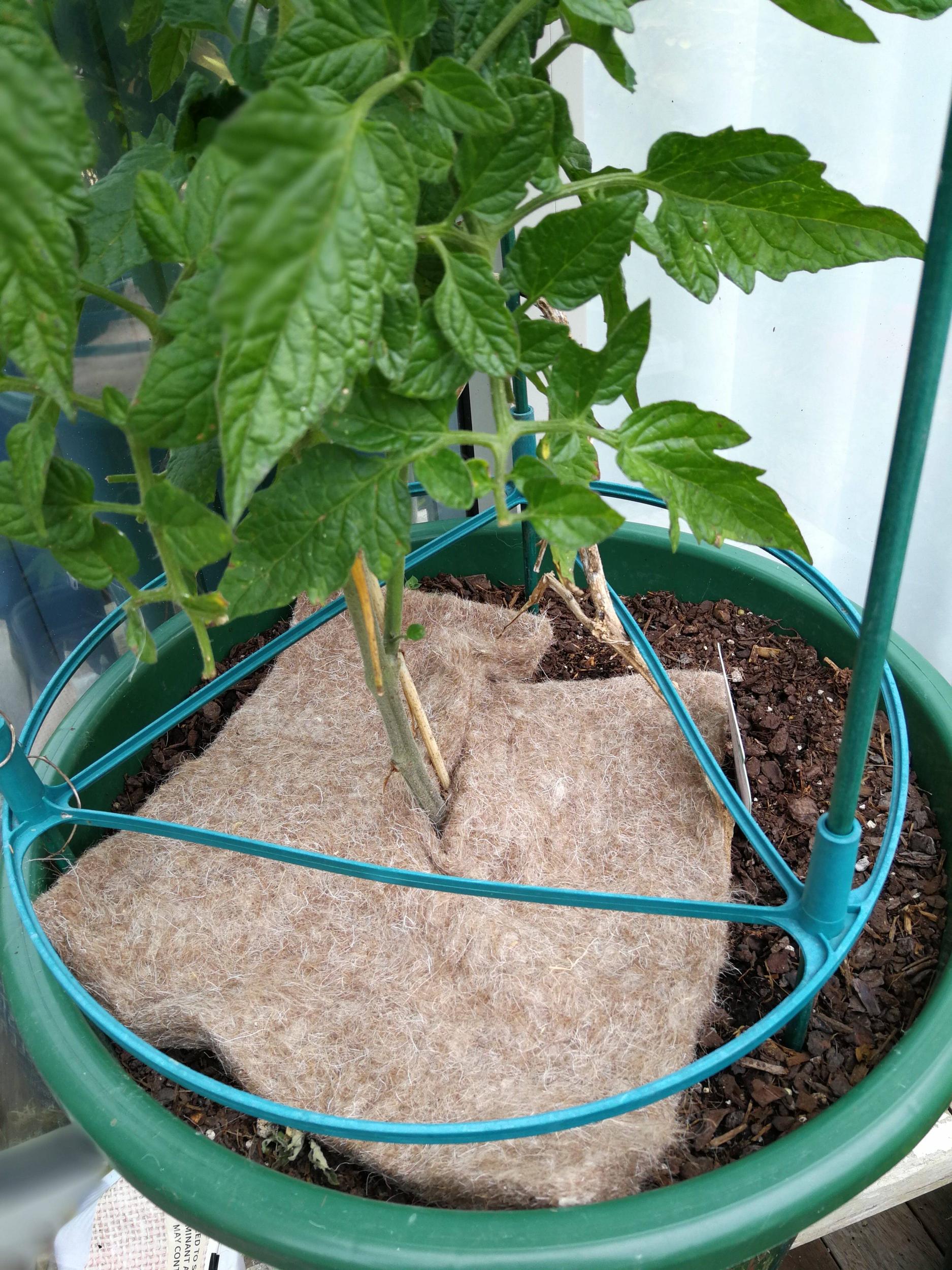 Not the answer you're looking for? Browse other questions tagged watering container-gardening water or ask your own question.

5
How to prevent fungus on soil in self watering pots?

2
Sansevieria leaves wrinkling and browning
13
Tillandsia (air plants) Turning Black and Dying After Watering
9
What sort of pots are used in the pot-in-pot method?
6
How to deal with water pooling on lawn
6
Do just-repotted plants really need to wait for days before watering them? Why?
6
Good plants, trees and grass to grow in order to lock the ground together
6
Plants not growing well in containers despite taking all the measures that I could read about
2
How to remove alkalinity (calcium carbonate) in water?
4
How do plants survive in the wild without someone watering them?
2
Treating AC condensate water to make it good for plant watering