First, some relevant information: I am growing Yukon Gold potatoes. I am in hardiness zone 6b. The weather over the last month has been dryer than normal for the area I am in (Northeastern US). I have four potato plants, all near each other. In my shared garden I don't think anybody else has potato plants.

About a week ago I saw some leaves curling on one of my potato plants. The leaves weren't dry; in fact, they felt kind of spongy. This happened after I had buried the plant for a second time in dirt. The plant is now buried about 12 inches up from where the original dirt level was, when the potato first sprouted.

Then yesterday I noticed some black spots appearing on a few leaves, and some of the newer leaves having large black spots and more curling. See pictures below. Text of question continues after pictures. 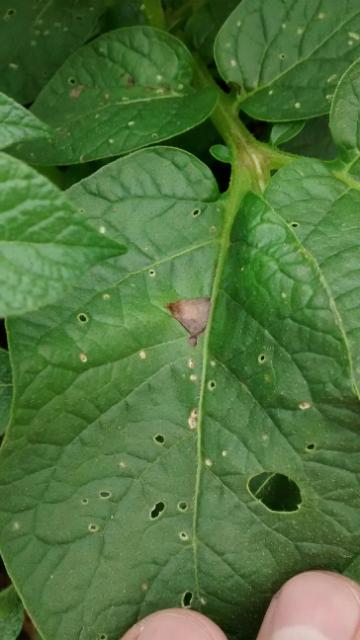 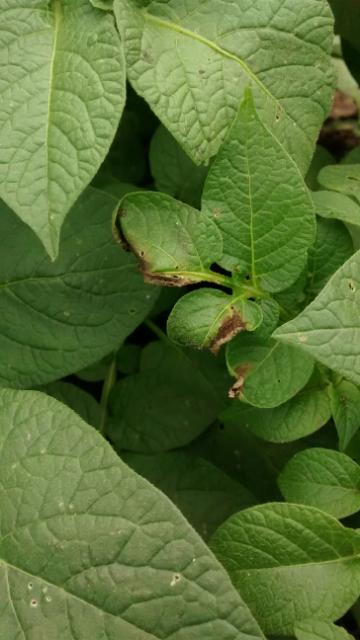 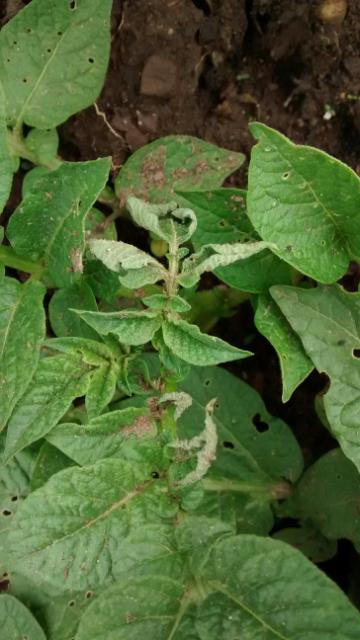 My largest plant is the one with the most spots, while one of the other plants is starting to show similar symptoms, and my other two plants are showing no symptoms. What kind of disease is this? From my Google results my best guess is leaf curl or early blight, but I am not sure which one.

What should I do to treat my plants? Or are they goners? Is it worth pulling out the two infected plants to try and save the two healthy (so far) ones?

Also possibly relevant: I saw two species of bugs I haven't seen in my garden before on my potato plant today. One was a red/orange kind of beetle, about a half inch long, which I was unable to get a good picture of. The other is shown in the picture below. 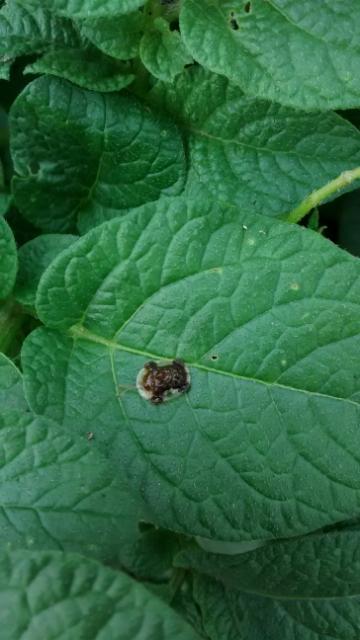 The angular edges of the lesion in the first picture are suggestive of early blight. The image quality isn't quite good enough for me to tell if the spot is made up of concentric rings, but that would also be highly suggestive of early blight. The third picture does resemble leaf curl, but it could also be that the stem has been blighted, causing the leaves to shrivel up.

For this years crop you should try to avoid wetting the leaves when possible. The fungus spreads mainly when leaves are damp. Ideally water from below, such as with a soaker hose or drip irrigation. Failing that try to water plants in the morning of hot days so the water will evaporate off the leaves quickly. According to The American Phytopathological Society and several land grant Universities I looked at (Minnesota, Michigan and Penn State) protectant fungicides such as mancozeb or copper fungicides (only ones I could find in non-agricultural quantities) can be used to help protect your plants by restricting the spread of the disease.

For next years crop, make sure you clean up all debris from the potatoes. Don't plant your potatoes (or tomatoes, or eggplants) in the same location next year as the fungus can survive the winter in fragments of potato left behind.

One thing you haven't said is whether these are early cropping or not, I'm assuming they're supposed to be. Its not really clear what's happening there - I'd say the tiny holes could be flea beetle damage, and the brown areas might be viral - the link below might be of interest, though its somewhat complicated because there are so many possible viruses out there:

The insect shown in the photo is impossible to see clearly - I can't tell if its Colorado potato beetle or not, but pick off anything you see on the leaves if its large enough. The curling or rolled upward leaves might indicate leaf roll/curl - its entirely possible you've got more than one thing going on here, which makes it harder to diagnose. I think I'd be inclined to pull up the largest, most affected plant and see what the tubers are like - you might see symptoms such as necrosis on those which would clarify the situation. They'll be thin skinned, but that's normal if you lift them early anyway.

Explanation of 'early cropping': different varieties of potatoes are grown at different times (depending on the climate where you are). First earlies are planted any time between March and April (can be grown in barrels or containers) - cropping is 10 weeks later. Second earlies are planted around the same time, usually in rows, and are cropped 13 weeks later. Then there's main crop (planted late April, cropped at 15 weeks - heavier crop) and late main crop, planted around the same time as main crop and harvested 20 weeks later. Yukon Gold matures quickly, average cropping time 80-95 days after planting, so, depending on your temperatures, its considered very good as an early or second late cropper. Hence the reference to early cropping in my answer, simply because you're growing this particular variety.

Not the answer you're looking for? Browse other questions tagged diseases fungus potatoes blight or ask your own question.