What kind of caterpillar is this?

About 2 cm (when I found them). They are olive green. They have a black head, and black dots on the side, around the spiracles. They are not hairy. If I counted right, they have three pairs of prolegs (fake legs). 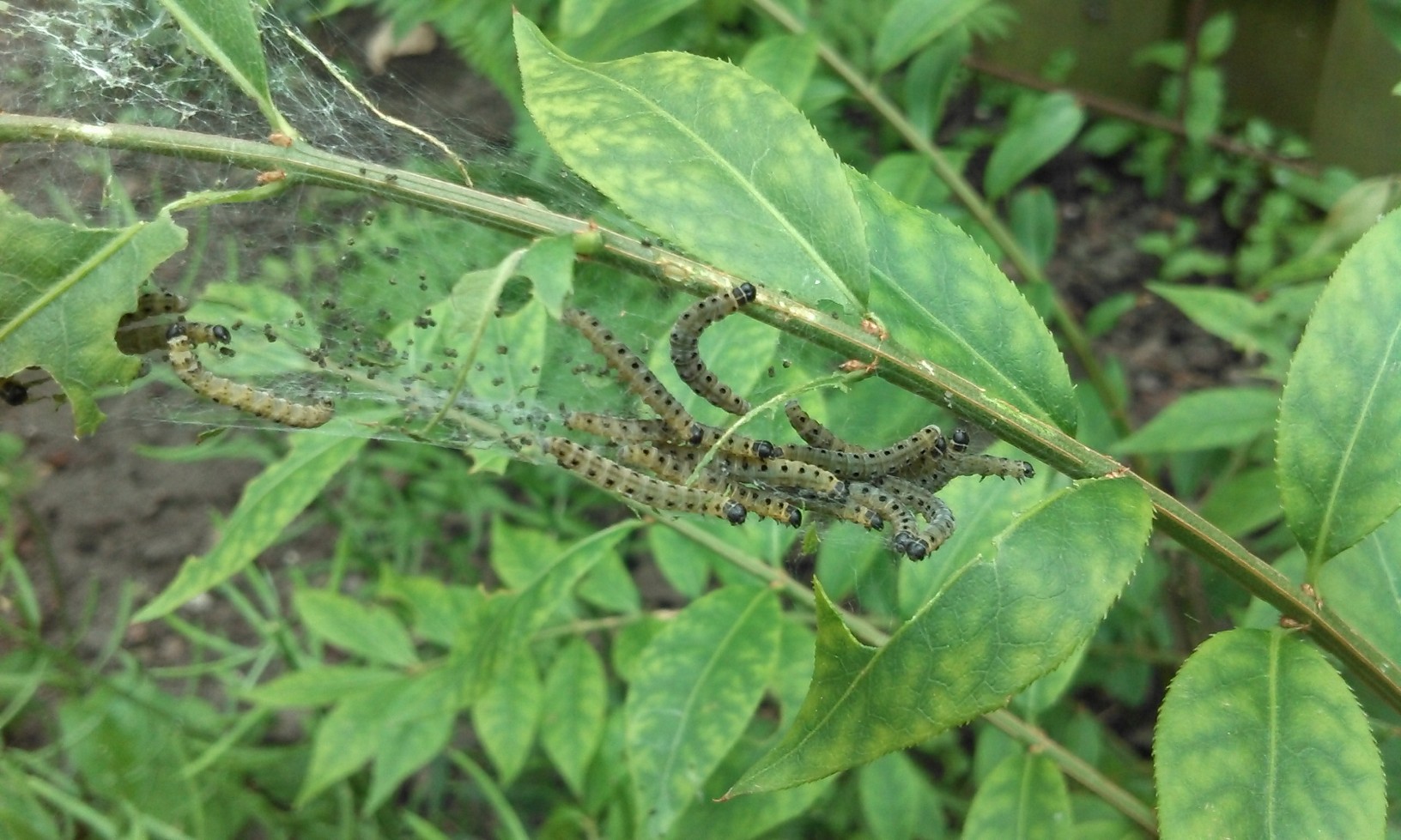 I found them in a spindle (euonymus), and it seems it's the only plant they like. The spindle is close (within 1 yd) to a sunflower, an acer japonica, a hawthorn and a couple of other plants, all of which are untouched.

The caterpillars are in groups of about 20 nesting and eating at the ends of the fresh branches. They have spun a spiderweb-like nest around them, although it seems they are not pupal yet, and they are still eating away. I've found about 4 of these 'communities' in what is yet just a small bush (about 2' high).

I have got quite a lot of sparrows, tits and other birds in my garden, but so far they haven't seemed to take a liking to these larvae. I'm in the Netherlands (zone 7).

identification pests butterflies
Share
Improve this question
asked May 25 '15 at 18:26

I don't think they are ermine moths, I think they're Euonymus caterpillars (Yponomeuta cagnagella), which is why they're on that particular plant and not the others. Its a tent caterpillar, and you need to treat them as a pest before they defoliate your entire plant. Check with your local suppliers what pesticides are available for this pest, but in the meantime, use your hose and spray the webs hard to destroy them (and maybe blast off some caterpillars, but they'll be back). Best treated when the webs are small and before the caterpillars become active

These are ermine moths (Yponomeutidae) (not to be confused by snout moths (Pyralidae), which are also sometimes referred to as ermine moths).

This family has over 700 species, although most of them are tropical. Given that it's found on a spindle, it might be a spindle ermine (Yponomeuta cagnagella), although other species of this family use spindles as their host too.

They go to pupal stage in June. By the end of June they enter adult stage (imago). The moth itself is a small white nocturnal moth, which also has black specks. It is attracted to light, and it will fly from the end of June to October.

The larvae are veracious and can eat every leaf of a bush or tree in a short time. They love spindles, apple trees, and members of the prunus family.

They are leaf-webbers, they live in groups of 20 to 50 caterpillars and spin webs in to protect themselves from birds and parasitic tachina flies. This can lead to spooky images of entire trees, and even cars, furniture and other stuff completely covered in webs. 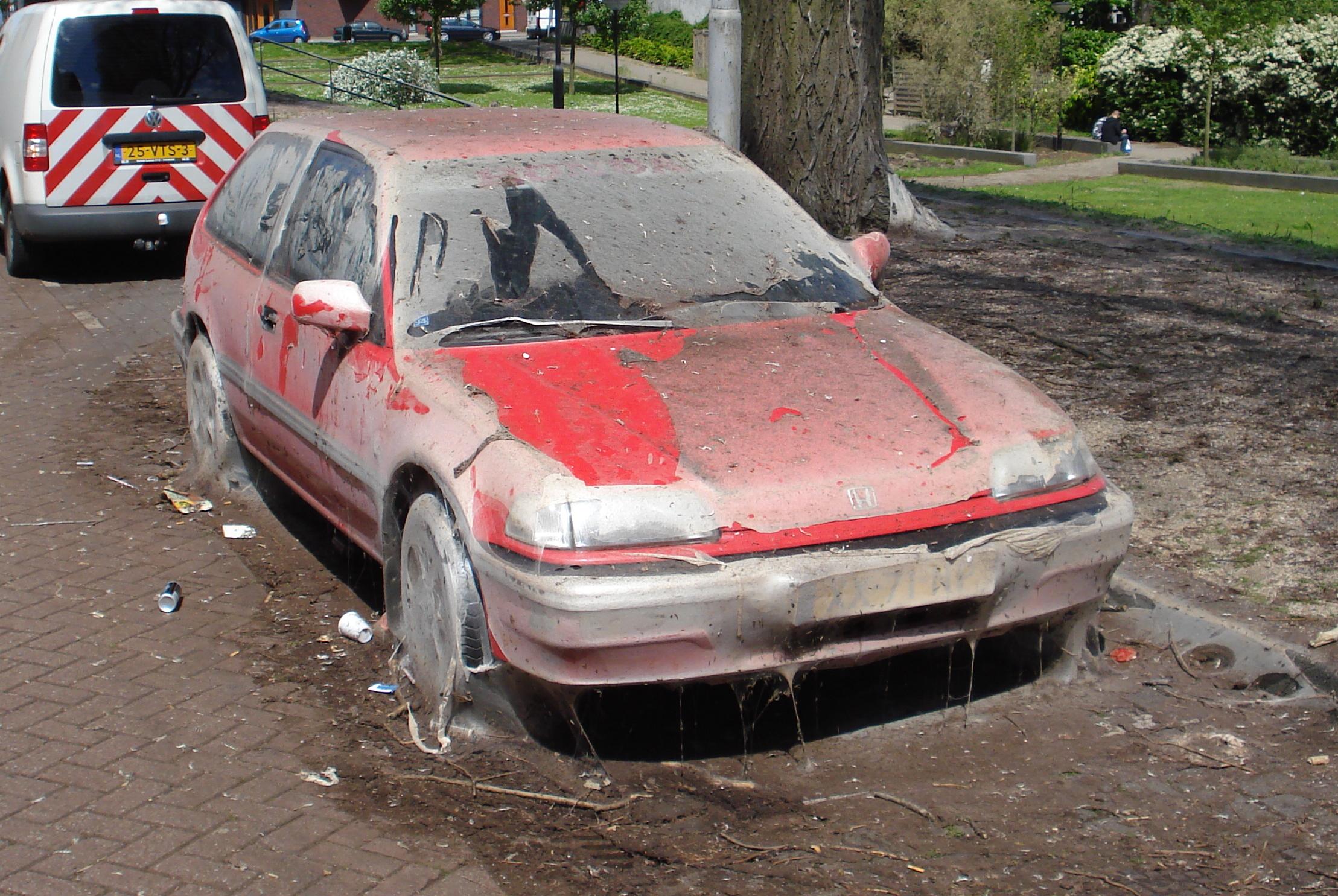 Only one generation is born each year, so the damage to the plants is limited. Because they change in June, most trees will have enough time to grow new leaves after that, and will survive.

To battle them on a large scale you will need a pesticide (like Bacillus thuringiensis?) (Maybe Bromophos, if that's the right English name..).

For a small bush, you can just remove them by hand, which is of course more environmentally friendly. Try to remove as many as possible and at least remove all the webs, so their defense is broken, and birds may eat them.

Not the answer you're looking for? Browse other questions tagged identification pests butterflies or ask your own question.

2
What is this bean-like plant in a forest on Vancouver Island, British Columbia?
7
Help with caterpillar identification
11
What is this stuff? Some kind of moss, lichen?
9
Caterpillars don't lay eggs so how is this happening?
4
Mango infested stems - tiny pink larva
8
What is this caterpillar?
1
What type of caterpillar is this?