Why didn't my Meyer Lemon tree produce fruit after it blossomed?

My Meyer Lemon tree was full of flowers this spring. I hand pollinated them using a q-tip, along with help from some insects, when the tree was outside.

After the blossoms fell off, it didn't produce fruit. Is this common? It is three years old and very healthy.

I made a blog post about pollinating the lemon tree: http://simplyresourceful.blogspot.com/2015/04/how-to-pollinate-meyer-lemon-tree.html 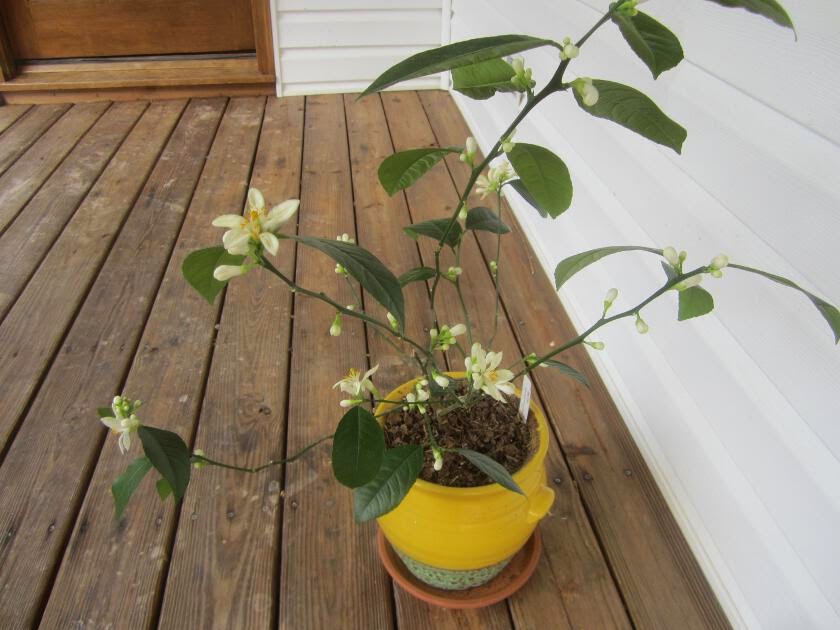 I live in WV. I took it outside when the weather was warm in early spring but kept it inside during the cold winter. I use citrus tree soil and fertilize with chicken compost tea. The chicken tea keeps the leaves from turning yellow & it works great for the other tropical plants that I have. We live in the mountains so there is no "true" sunny window here, but it is always placed in the sunniest location on the south side of the house. Yes, it is well-watered. I use a moisture meter monthly. The tree is currently putting out new leaves.

UPDATE: The tree is blossoming again. Let's hope for the best.

You've said watering was 'tricky' and you were worried more about over watering and rotting. When a plant flowers, its water supplies should be increased, because if there isn't enough fluid around, fruit initiation doesn't occur and the flowers simply fall off.

From the angle of the photograph, its difficult to tell whether it might also be somewhat rootbound because I can't judge the depth of the pot - if it is, it would need more frequent watering, so I'd usually advise you to turn it out of its pot, or at least check the bottom to see if there are roots hanging out. Turning it out of its pot is a better way to tell, but the pot you've used, unfortunately, is narrower at the top than it is in the middle, so the only way that plant is coming out is if you break the pot, if it is rootbound. Certainly, if its been in the same pot for three years, it likely needs potting on.

By the looks of your plant it is not yet old enough to produce fruit. If you started it from a seed, it could take up to 7 years to produce. If has been grafted 2-3 years is about normal.

Same happened with us. We got a special fertilizer for citrus and brushed the flowers with a little paint brush not used for anything else and we finally got some. Hope this works for you. It's like being pregnant for 2 or 3 years and not having a baby you are waiting for. So exciting when we FINALLY got fruit. haha

Your tree is mature enough to bear fruit, but needs increased foliage to support the fruit. Pollination can be accomplished with a small paint brush, or in the weather allows it outdoor exposure so bees can perform the pollination.

Not the answer you're looking for? Browse other questions tagged diagnosis fruit-trees lemons or ask your own question.

7
How can I get lemon trees to bear fruit?

7
Trimming back a Meyer Lemon tree
6
Why doesn't my fig tree produce fruit?
3
Why is my 10 year old Meyer lemon tree suddenly producing orange fruit after producing yellow fruit for several years?
1
Meyer Lemon Tree
1
Is it possible to revive a lemon tree with no leaves and one lemon?