I bought this Peace Lily three weeks ago. A day or two later, the leaves went from upright to down on the floor. I'm not sure what happened. I've not overwatered and it's been kept out of direct sunlight.

What can I do to bring it back to normal? 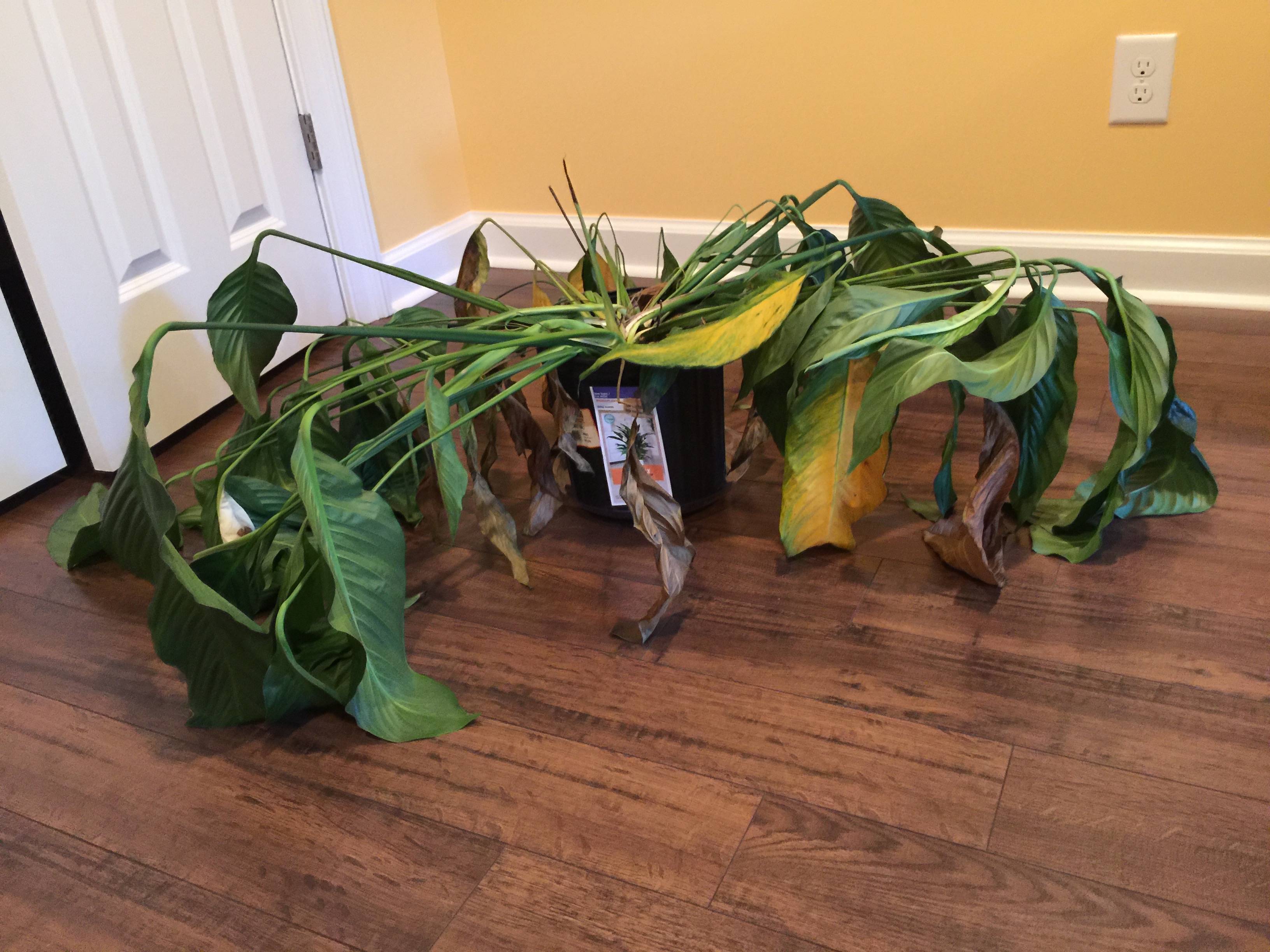 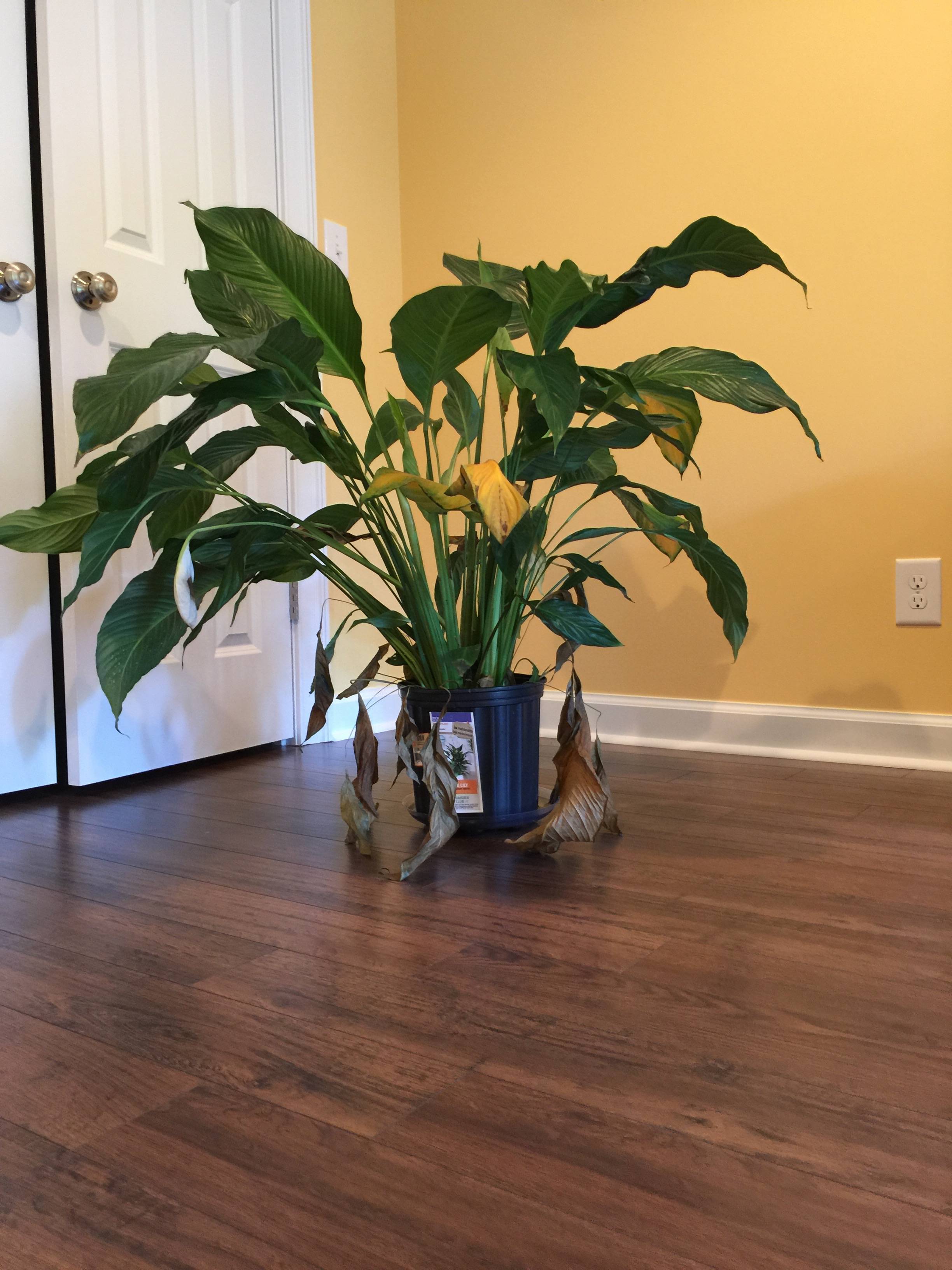 Peace lilies (Spathiphyllum) "crash" when they don't get enough water and it looks like what you see in the photo.

It could be other issues but that's the most common one that causes spaths to fall down like that so check the soil moisture first.

Watering it will bring it back. If the soil in the pot is dry that's the likely cause. I had this happen in the past and the plants recover. Actually happened recently in a plant I have in a room I don't go into that often and forgot about.

I placed it in a saucer of room temperature water, checked and refilled the water periodically if it was empty. It slowly started to perk back up and by the next day it looked like it did before.

I'd recommend trimming off the yellow/brown leaves while it's still in the crashed state. The won't come back and it's easier to do it now that they're all apart.

When you say you've not overwatered, it would be helpful if you could explain what that means - these plants hate to dry out completely, should be watered copiously as soon as the surface of the soil in the pot feels just dry to the touch, but not left standing in water for longer than an hour in any outer tray or pot. I'm not sure from the picture whether the pot I can see is the pot containing the roots of the plant, or whether that's just something you've stood it inside, so can't comment on whether it needs a bigger pot or not. A plant of that size though, will have a fairly large root system which may be filling the pot its in - that means it requires more frequent watering because there's less soil in the pot to hold water for the roots.

This one appears to be suffering serious drought, so I suggest you 'plunge' it - meaning sit it in a bowl or bucket of water for an hour or two, preferably weighted down with something to keep the pot under the surface of the water, then take it out and let it drain down. It should, hopefully, recover, though if its been like this for nearly three weeks, it might not recover terribly well initially. After this treatment, remove by cutting off at the base any still droopy or discolored leaves, then ongoing, water as described in my first paragraph. Find a position for the plant that is not near a heat source, such as a radiator (in case that's a contributing factor to its current condition). If it recovers, check all the leaves, stems and backs of leaves, to make sure there is nothing there that shouldn't be, such as insect infestation, just to make sure its only drought and there isn't something else going on as well.

There is one other possibility though - if, where you live, temperatures outdoors when you bought the plant were very cold, and you did not protect the plant when transporting it home (in other words, it was exposed to cold temperatures for a while) it might have suffered transplant shock, caused by the warmth where it had been before you bought it, the sudden shock of cold, then back to a warmer situation.

15
Can this peace lily be saved?

2
Why are my Vinca and other potted plants wilting, despite following care instructions?
3
What plant looks like a Peace Lily but has no flowers?
4
Droopy peace lily
3
How do I save my medinilla magnifica?
4
Brown tips of peace lily?
8
What to do with a plant that can't support its own weight?
4
Blacking of peace lily
3
Does anyone know what’s wrong with my Areca Palm?
3
12 year old peace lily
1
Excessive browning of Peace Lily