How do I remove dandelions and bull thistle from my lawn?

My backyard is completely (seriously, completely) infested with weeds -- bull thistles (or spear thistles) and dandelions (the common yellow-flower weed), to be specific. 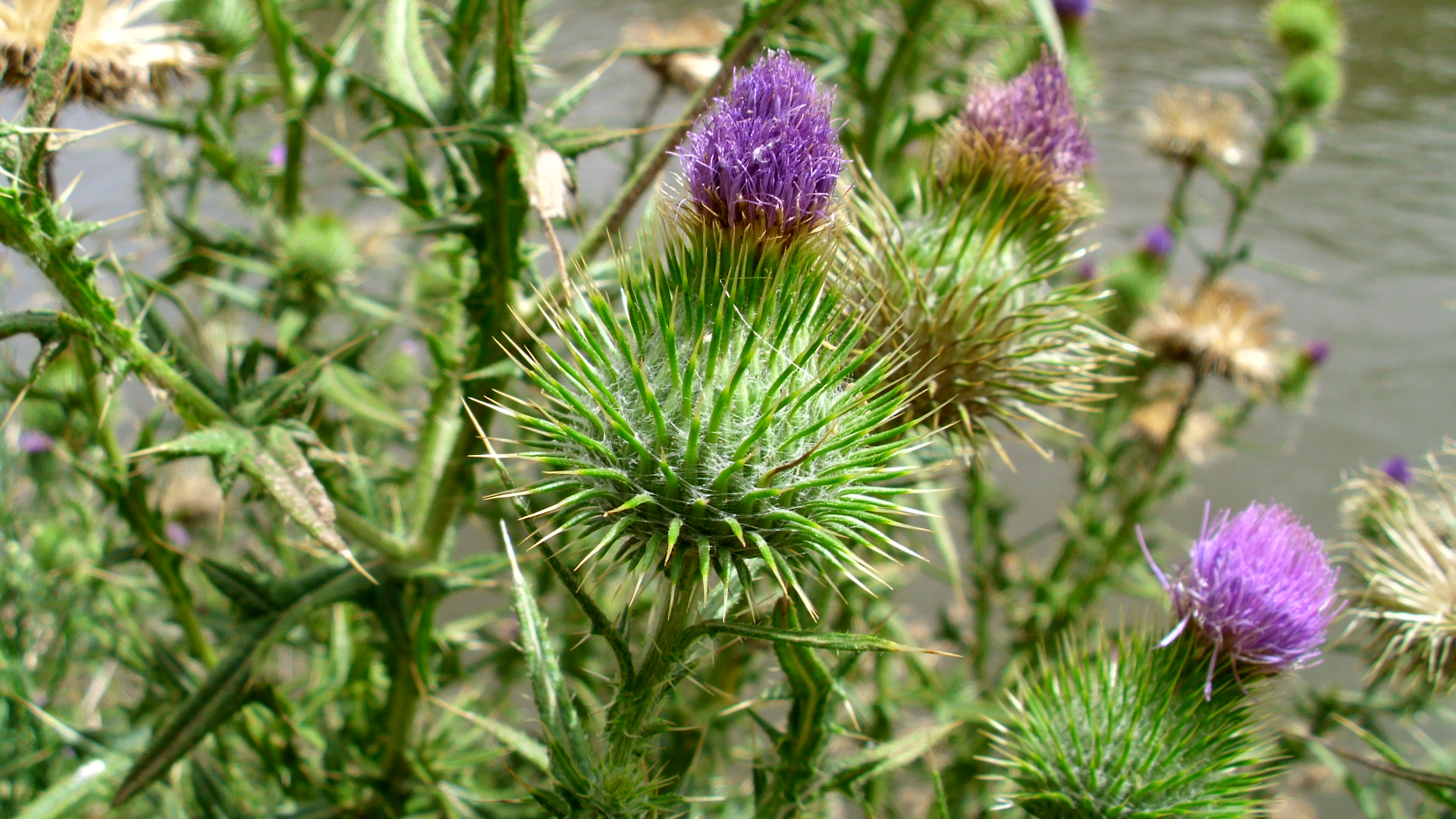 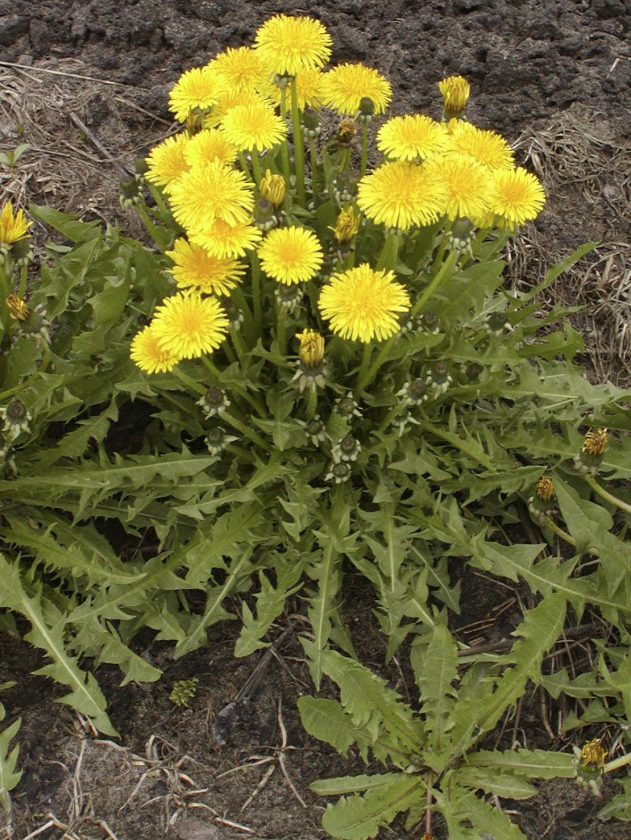 How do I get rid of these things without the back-breaking effort of uprooting them all (there are probably too many), or the expense of paying a professional service for it?

I've heard vinegar works well (albeit it kills grass too), but I'd like to hear if there's another natural, inexpensive way to get rid of these nasty weeds.

Now that the question has been updated to include "Thistles" I've revised my below answer a little...

Credit for the "dandelion" part of this answer goes to my mum.

When we (wife and I) moved into our current home 4 years ago, the front and back lawns were covered in dandelions (and other broadleaf weeds). I didn't want to go the herbicide route, and after speaking with my mum, she said the only way to truly get rid of (control) dandelions is to hand remove them (important: you need to remove root n' all) and recommended using a small hand garden trowel for doing so.

I didn't have a "small hand garden trowel", instead I bought a small (and cheapish) builders trowel and used that for 3 years: 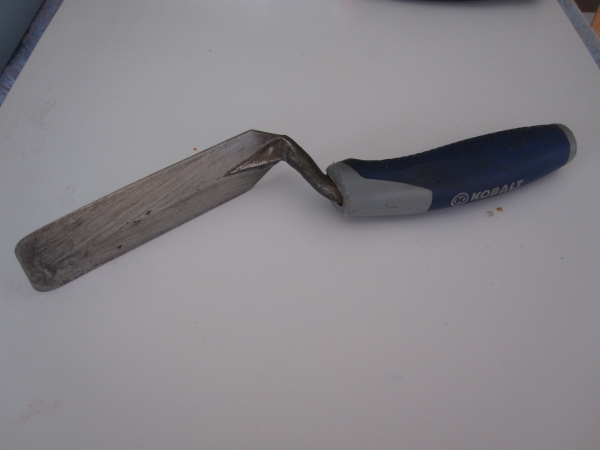 Then last year on clearance (paid $1) I picked up a Fiskars Softouch Weeder: 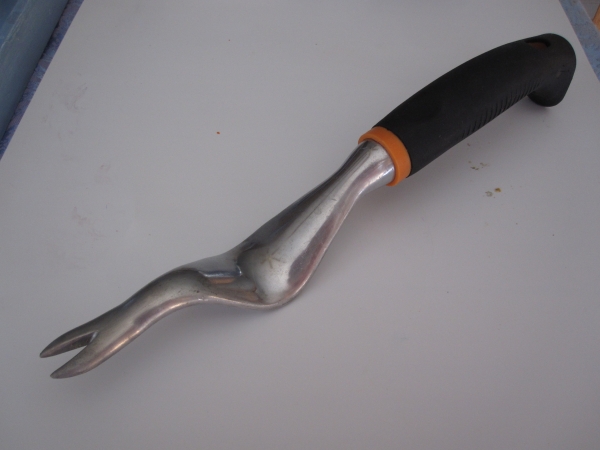 Both of the above hand-tools have worked well in removing dandelions (roots included).

If you wish to read more about how I approach "organic" lawn care, go here on SE:

Personally I haven't had to deal with thistles in my lawn, that said I do occasionally have to deal with that unwanted plant (weed), along with dandelions and spurge in our street's common ground (flowering) areas that I maintain (I don't mow the grass, a lawn care company takes care of the mowing):

I remove "smaller" thistles using the above tools, basically I treat its removal the same as dandelions ie Remove the unwanted plant, root n' all.

For "large" thistles I use a spade to dig them out (root n' all). After digging them out I back fill the holes with some suitable material and make good the area.

Whilst I share your preference for the non-chemical route, I think your best course, given that this is a serious infestation, is to spray the leaves with a systemic weedkiller, such as Roundup, which will spread into the roots and kill them. Make sure that the dandelions are growing actively - mid to late-spring is probably the best time - and that there is enough leaf area to spray the weeds fully. You will probably need to spray them at least twice.

Short of hand-weeding, an alternative natural strategy (although less effective than the chemical one) would be to spread corn gluten meal over the whole area, cover it with black plastic sheets and weight them down. This will deprive the weeds of water, and of light which will prevent photosynthesis, and will eventually kill most of them - but it will take some time.

I hadn't realized that the weeds were in your lawn, and I can understand why you wish to avoid using chemicals, given that you have young children. In the circumstances, hand-weeding would seem to be the only way forward; this tool has received excellent reviews and would take most of the backache out of the operation.

The weed&feed weedkillers are going to be insufficient for thistles, but should work on the dandelions. I think the thistle should be the priority though - it is spiky and looks bad.

Your options are physical removal or weedkiller: no free lunch, here! I would use a systemic "kill everything" weedkiller. You can use it as a spot treatment and if you get the thistles when they are still small, it is easy to apply to the crown without catching anything else nearby.

Yes this can pose a problem with kids, but you only need to ban them from the lawn for a week or so (read the instructions on the weedkiller). This should not be a problem if they are already refusing to walk on the lawn due to the spines. You could also try fencing off sections as you treat it?

Remove the dead thistles with a spade as the spines will still hurt. They should compost okay, but remove all seed heads and trash them (do this before the weedkiller as the seeds will only spread).

Dandelions grow well in alkaline soil which most grasses do not. If your soil is alkaline your grass could be thinning leaving room for dandelion to grow. Do a soil test with your local university cooperative extension and make any changes to pH and fertility. It will do a lot to help thicken your grass to help prevent weeds.

Set your lawn mower to the highest setting to help shade out new seedlings. It's also good for the grass. Water and fertilize appropriately. There are other things that might be keeping your lawn from growing thick such as dull mower blade or disease. Try to figure out what the problem is and correct it. A healthy, thick lawn is a big factor in controlling weeds.

One popular weeding tool that works well for dandelions and other weeds that have a long tap root is the Weed Hound Elite (check the link for my thoughts on it on my site). It's nice because you don't have to get on the ground to weed and it works very well.

You can spot spray the weeds in the fall using an organic herbicide such as vinegar. Spray them, wait a week, if they start coming back spray them again a week later. Do this for 2-3 weeks and you'll drain a lot of the reserves from the roots. A combo of the weed hound and spraying works well. Then reseed those areas of the lawn.

Check out Organic Lawn Care for the Cheap and Lazy. There's more info on proper mowing, fertilizing and watering and specific info on dandelions and thistle.

I know it seems like I'm carrying the "calcium" flag on this site as it seems calcium is the answer to almost any problem, but once again, if you want to be rid of dandelions, check your calcium levels: 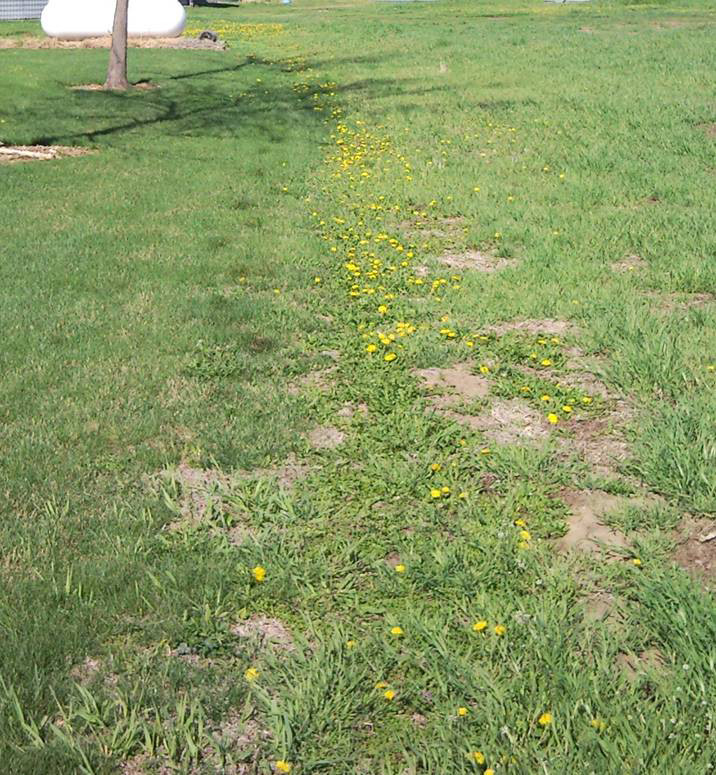 Another testimonial from a credible source can be found here: Calcium Works! Not A Single Dandelion!!!

I'm a believer that each plant has its perfect soil conditions where it competes well with other plants. Clover competes well with other plants in a low-N soil. When the N levels are raised, clover doesn't compete as well as grass and the clover goes away over time. Likewise, dandelion competes in low-calcium soils. Or maybe it's better to say dandelion competes in high-potassium soils... which is really saying the same thing. 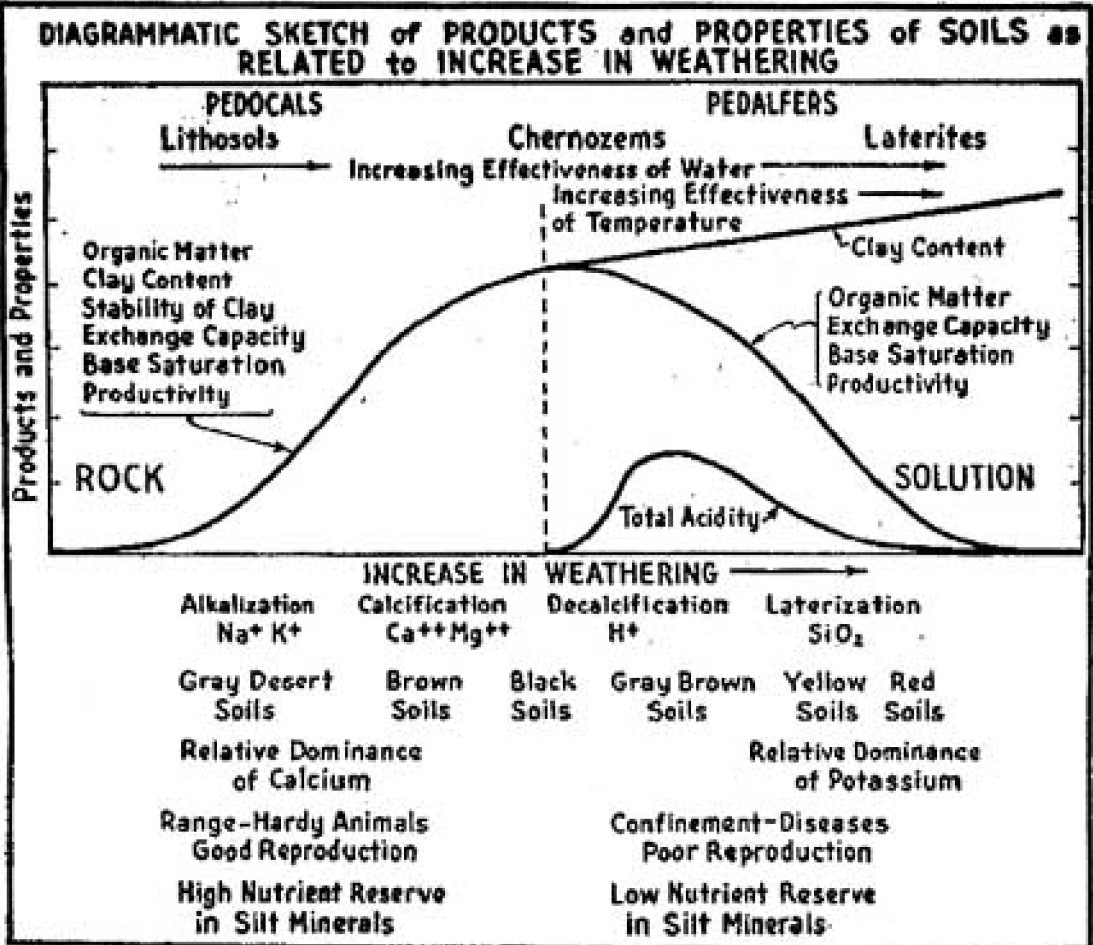 Why am I bothering to tell you this?

Second, in a greenhouse study in Minnesota, Taraxacum had a higher requirement for potassium and had its biomass more limited by potassium than any of five common grass species of Park Grass. This suggests that Taraxacum may be a poorer competitor for potassium than these grasses, but this mechanism has not yet been tested. Third, in a series of Minnesota lawns that had not received fertilizer or herbicides, both Taraxacum density and abundance were significantly positively correlated with its tissue potassium levels.

This demonstration that desired and weedy plant species can differ in their resource requirements suggests that adjustments in resource supply rates may determine the outcome of interspecific competition, allowing desired species to competitively control weedy species. In particular, for soils with low potassium levels, the use of potassium-free lawn fertilizer is predicted to decrease Taraxacum because of competition from grasses like Festuca rubra.

The best way to lower potassium levels in the soil is by raising calcium levels.

If you raise calcium, it will dilute potassium in the soil and make it very uncomfortable for the dandelions, but the grass will love it.

47
What's an organic way to discourage crabgrass from a large "lawn"?
3
What is a practical strategy for removing dandelions and bull-thistle from my lawn without them returning?