Do I need to lay landscape fabric under ground-cover plants to prevent weeds growing?

I have a large hillside area in Pennsylvania, where usually weeds are out of control. For the next year, I am thinking about using some kind of ground-cover plants such as English Ivy to cover the area. I would like to know if I need to lay landscape fabric before doing so. Can it prevent weeds from coming back next year?

weed-control ground-cover landscape-fabric
Share
Improve this question
edited May 18 '16 at 14:10

Think twice, no three times before planting English Ivy. It is considered an invasive species in the US, and on the "noxious species" list of 46 States. Basically, plant that stuff and you risk it becoming a much bigger problem than any weed problem you have at the moment! Garden centers should be shot for stocking that stuff.

Sorry, had to say that! Ground cover is the best long term way of keeping weeds down. And it looks good too. Just choose something native.

Landscape fabric is all the rage at the moment and on another question I suggested it for strawberries, and I have used it under edging stones. However, I am not inclined to use it over large areas. First it does not rot down (or not quickly enough - our city used it under a retaining wall at the front here and it hasn't rotted after almost 10 years). Next, you have to poke holes in it for the roots. This might be fine for shrubs, but it would not work for ground cover that spreads (which is what you really want). So I would be inclined not to use it unless you can find a type that rots in, say, 3 years to give short term protection only.

What can you use instead? Aggressively weed first, including all roots that you can get. Weedkillers might be an option (I know a rainforest restoration project that starts with a treatment of Round-Up!). Plant your ground cover plants, and then mulch. Be aggressive with weed removal when you see them (invest in a hoe if necessary) - this is what I have done with my pepper beds and currently do with my xeriscape bed (we have an aggressive grass problem but one year of aggressive weeding complete with root removal and the second year is much easier).

Agree with "winwaed" answer, especially the part about "English Ivy".

If I had to recommend one plant for your situation (ground-cover plant to cover a hillside area) from the plants I used (see below), it would be:

Once established it will spread more like 10 to 12ft (3 to 3.6m), but it can easily be trimmed back to suit specific requirements...

A little bit of information relating to my native garden that I've already posted here on SE:

Q. Why didn't I put down a landscape fabric?

Q. Why didn't I put down a mulch layer?

Below is a summary of what I did (right or wrong):

If you wish to go the native plant routine, I gathered together a few resources for you:

Below are a few photos from my Native Garden project: (click images to enlarge) 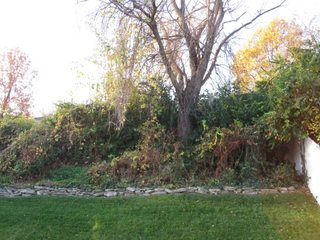 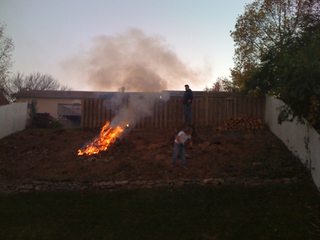 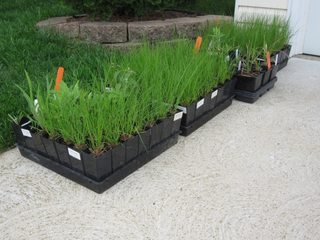 2011-05-07, Annual Rye grass still growing well, even after being cut down to the ground 3 times during April and Roundup having been selectively applied to unwanted plants 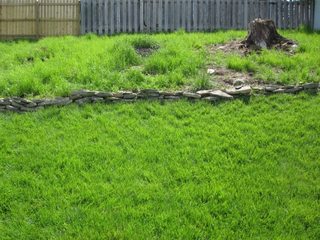 2011-05-22, Area after once again being cleared to the ground, immediately before planting 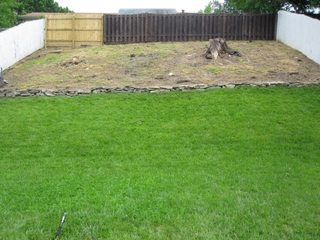 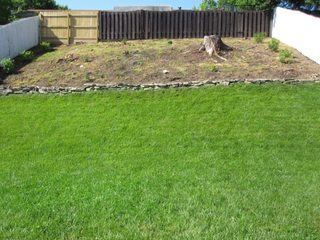 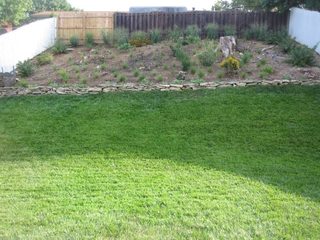 Landscape fabric should NEVER be used for weeds. What it was designed for was to place between soil and gravel so that the gravel doesn't sink down into the soil and disappear. Plastic or this fabric under mulch stops all the processes between plants and soil and organisms.

The best thing I've found for weed control that also feeds your soil is decomposed organic mulch. 2-3" every other year does better than bark and fabric combined to control weeds.

The absolute best decomposed organic mulch is human poo, mixed with sawdust and completely decomposed. Fine, uniform textured, dark taupe, no weed seeds, no pesticide residues and the soil and plants love it. I don't even pull weeds, just dump this right on top. Keep away from the base of woody plants. Gorgeous, easy and what nature would do in your place.

Not for vegetables but everything else...check with your local sewer companies. The only decomposed organic mulch that is tested, 5X, and you can trust unless you make your own mulch.

It is NOTHING like the original material. If it smells at all it has not been composted properly. Find another source. Using undecomposed mulch robs the soil of nutrients and causes the soil organisms necessary for plant health to go dormant until there is decomposed organic mulch to eat. If I got the chance, I'd ban plastics, fabric, bark and chips being used as weed control. They are turning our urban areas into deserts!

Not the answer you're looking for? Browse other questions tagged weed-control ground-cover landscape-fabric or ask your own question.

23
How can I naturally encourage birds into my garden?
21
How to plant a new lawn on a hillside?
18
How are weeds controlled in a butterfly garden?

19
What is a good ground cover for street frontage instead of lawn?
15
How do I bake weeds out of my landscaping?
3
Amending a barren yard with compost: dedicated weed barrier or no?
3
Is it possible to save a lawn completely overrun with weeds? If so, how?
6
How can I kill English ivy?
5
Looking for plants to out-compete poison parsnip
4
Preventing invasive roots in raised garden beds
4
Is it ok to leave landscape fabric exposed in an area without plants and foot traffic?
5
What is the difference between landscape fabric and ground cover?
4
Is landscape fabric stressing my plants?