How can I help a rhododendron with yellowing leaves and a dead section?

I have a rhododendron which was healthy last year, and produced gorgeous white flowers. 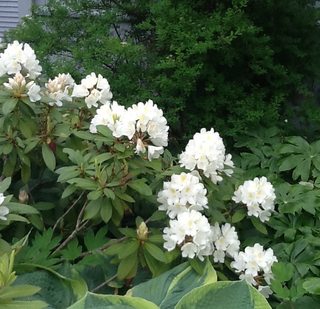 Today I noticed that many of the leaves are turning yellow, and a section appears to have died. 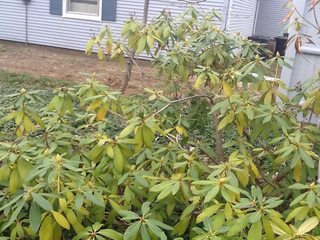 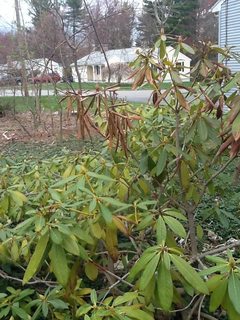 There's plenty of new green growth, so perhaps it's just a natural part of its lifecycle. 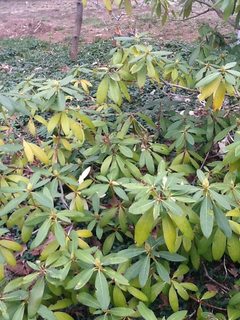 A large rhododendron a few feet away looks quite healthy, though, so I fear that's not the case. 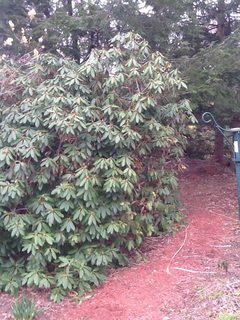 I see tearing along the edges of some of the leaves, causing me to wonder if it has some sort of infestation, however, I examined it closely and didn't see anything. We've cared for it pretty much within the parameters of this answer.

Note that our winter has been unusually harsh. We've had long cold spells, and a lot of moisture, mostly in the form of snow, which only melted a few weeks ago.

What's wrong with my rhododendron? How should I proceed in order to help it thrive?

Update- My bush has been diagnosed with an infestation of Black Vine Weevil. See answer below for information.

I wonder whether you've had a very wet winter, or an usually cold one. I'm assuming this shrub was formerly healthy for some years, so this isn't a simple case of chlorosis - it looks, unfortunately, as if its got a fungal infection, probably at the root, causing the symptoms and die back at the top. You can try cutting it right back, in particular removing dead parts, but check the stems first, looking for any cankers that might be present. If you don't find anything and you do cut back, spraying with copper sulphate after flowering, or at least when it should have flowered, and probably again another couple of times, might help, but if its phytophthera infection, you may lose the shrub and it may spread to the others.

I believe you have (in the States) something called a local Cooperative Extension Office - it might be best to contact them so you can get a proper diagnosis from a professional, and a treatment plan, or at least a recommendation to remove any of your rhododendrons so affected.

Cankers usually look like sort of corky or knobbly swellings on the stems, often black, but not always, sometimes weeping, not always, occasionally they just look like black splits or lesions - the presence of these might indicate a particular form of phytophthera.

The fact your winter was very cold could explain the chlorotic appearance and possibly the dieback - but lots of wet weather will encourage root rots (usually a different variety of phytophthera), to which these plants are susceptible, so its quite hard to be sure what exactly is going on.

I called my local cooperative and, as a courtesy, a specialist in diseases of shrubs and bushes examined my plant. He found no evidence of phytophthora. Instead, he said it's infested with black vine weevil, which he called a "formidable and severely destructive" pest.

The black vine weevil feeds on a number of bushes, including yew and hemlock, but its favorite is the rhododendron. Dead sections and yellow leaves in the spring can have a number of causes. If your bush exhibits these symptoms, examine the leaves thoroughly. They are food for the adult weevil, so check for bite marks along the edges, called notching, and small holes in the leaf bodies. The weevils are small, dark, and hard to spot, so this type of leaf damage is used as an indication of their presence. While they may look bad, those leaves don't pose a serious threat to the bush. Death generally comes by way of root-feeding larvae.

Adult weevils are slate gray to black, between 8.5 and 11.5 mm long. They have a short pronounced snout, a somewhat beaded appearance, asymmetrically arranged tufts of short gold/orange hairs along modified wings on the top of the abdomen, and elbowed antennae. They are flightless, and female only. They're also nocturnal.

Adults hide during the day in shady, moist locations like leaf litter, mulch, or on the stems of dense plants. If disturbed while on a stem, the adult will drop to the leaf litter where it becomes difficult to see due to effective camouflage. Source

After dark, they go about the business of eating and laying eggs. Adults require 21-28 days of foliar feeding in order to produce eggs.

Eggs are laid at night, either dropped to the ground while feeding, inserted into crevices on plants (Smith 1932), or deposited in the same hiding places where adults are found during the day, usually under the soil surface and up to a depth of 20 cm. (Nielsen et al. 1978). Once egg laying commences, the amount of feeding by the adults decreases. As long as moderate temperatures last, egg laying continues into autumn (Nielsen et al. 1978). Adults during their first year may lay 200-400 eggs apiece (Smith 1932). Source

The eggs hatch in waves, beginning in 10-14 days, into small larvae which are white with brown heads, legless and usually curled into a c-shape. These are the main source of damage, and, ultimately, death of the plant.

Injury caused by the larval stage feeding on the roots is highly destructive to plants. Feeding by larvae occurs from mid-summer through fall and in early spring. At first larvae feed on small tender roots, but in early spring, they move to the bark of large roots or the stem, sometimes completely girdling them. Source

When the weather turns cold in the fall, the larvae move deeper into the soil where they overwinter. They re-emerge in the spring, when they mature into adults, start eating leaves and the cycle begins again! Some adults also survive the winter. Those are particularly dangerous because in the second year, egg-laying increases to an average between 600 and 800.

Once a weevil colony is established, there's little hope for the plant, and aggressive insecticide treatment is generally required. There are a few management tools that work for some people, however, and can be worth trying. A popular method is to trap adults in burlap and eliminate as many as possible, thereby reducing the number of offspring.

Burlap sacks can be used as trunk wraps and are useful for single or multi-stem plants. Make 4-inch lengthwise accordion folds in the burlap bag, then hold one end against the base of the trunk, and loosely spiral the wrap. Do not tie the burlap to the trunk since adult weevils must climb into the openings in the vertical folds. To count captured weevils, unwind the burlap and shake it over a white sheet or concrete paving. Repeated and frequent removal of the adults could be sufficient for suppressing the weevil population in small residential plantings. Source

If you choose to use insecticide, in many states, it can only be applied by specially certified and licensed landscapers. Because eggs hatch in waves throughout the season, repeated applications are necessary. The first should be made in May, and continue at regular intervals through the fall. Soaking must include soil and foliage, and is best done at dusk, when the weevils are more active. Treatment is complicated by the fact that black vines are very resilient and develop immunity to individual chemicals, necessitating frequent changes in formulas. Also, even though they can't fly, they're fast walkers with a great sense of direction, so if a host rhododendron becomes unpalatable, they'll just move on over to the nearest one!

Some people prefer to remove the bush rather than using pesticides. We have a no-kill philosophy at our house, which includes all animals, but we love our plants too. I did speak with a certified landscaper, but he said he would charge $500 just to come discuss options. I'm waiting for a call from another landscaper, although we probably can't afford him either!

Here are some current pictures of my leaves. In case you're wondering, I was told that all the plants growing under my bush are not harming it, and there's no need to remove them. 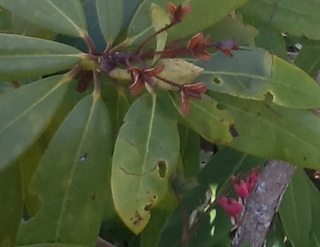 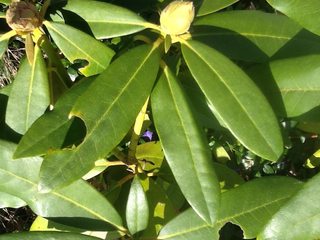 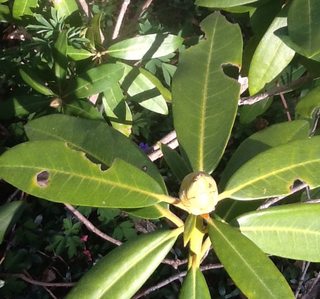 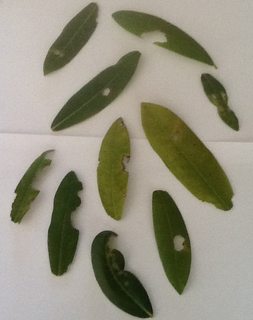 Not the answer you're looking for? Browse other questions tagged diagnosis plant-health shrubs rhododendrons or ask your own question.

7
Is this shrub a rhododendron, and how can I help it to flourish?

17
How should a lemon tree with yellowing leaves, peeling bark, and small fruit be saved?
12
Tomato plant looks like it has grains of salt - what is it and how do I treat it?
6
How should I treat a weigela bush with a large section of dead branches?
3
Why would cuttings from the same hibiscus exhibit different growing behaviors?
3
Young rhododendron with yellow and brown leaves
4
When, and how far, to prune down a massive overgrown rhododendron?