Why are my rose flowers getting dry?

First of all, I'm not a gardening expert so I don't know the correct terms.

I bought some roses recently and I've put them next to my window. Their leaves are getting dry and their flowers are dropping, and I have used diazinon to kill the aphids (I apply it every week).

Here are some pictures of them (I've taken pics from behind my window so it's a bit dark): 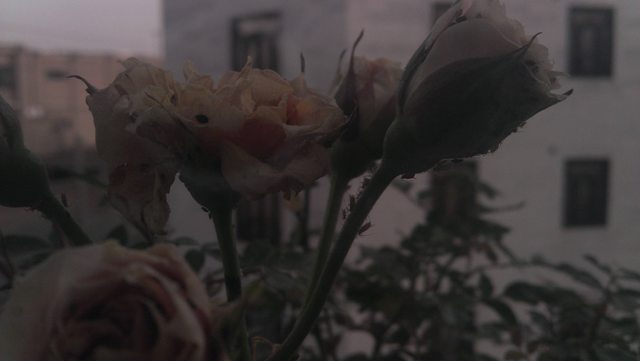 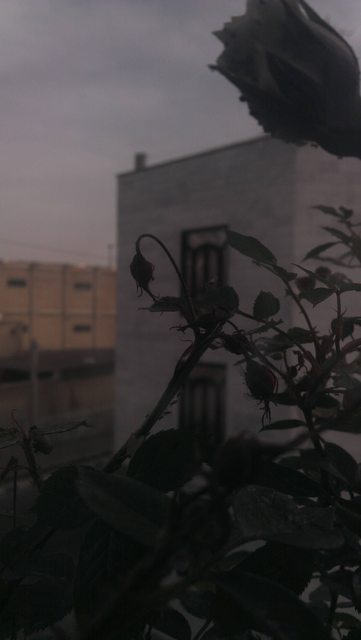 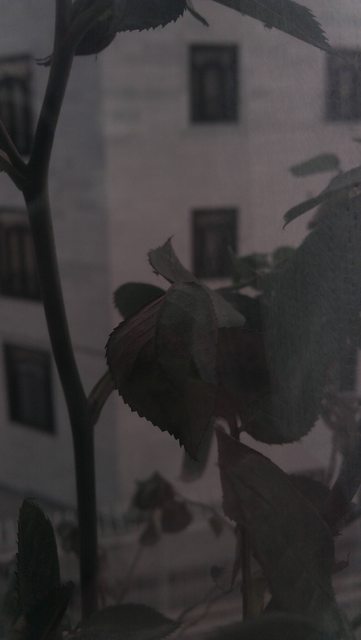 Several things to say - first, if they're drying out as you describe, insufficient water might be the cause. Second, roses don't do that well in pots unless they're small roses - if your rose genuinely is Rosa chinensis, that one varies in size between 90 cm high and 30 wide up to 2 metres high and wide, depending on which cultivar you have. Hopefully, you have the smallest version, but even that will need a pot 2 feet deep by 12 inches wide. Roses like to put down at least one very long and deep root, usually 3 or 4, and that's something they can't do in a pot. They also prefer heavier soil, so don't use too light a potting compost.

As for the use of Diazon, can you not find a more suitable spray - this one works by disrupting the central nervous system of insects it comes into contact with. The trouble is, it disrupts the central nervous system of human beings too. It is also not systemic, it's a contact insecticide only, meaning it only kills insects it comes into direct contact with when you spray, and there is no residual effect, meaning you have to use it more often. If you're only using it to control aphid type insects, you'd be better off using neem oil mixed in a spray, at least that won't damage you, and you can use it frequently with significantly reduced ill effects on anything that's breathing. When you do spray, do it when not many insects are about, so around dusk is best, and don't spray when the rose is in full sunlight, best done when its shaded or the sun is no longer directly on the foliage.

With regard to watering, the average rose likes a total of 90 inches of rain per year - increase your watering, but do not allow the pot to stand in any outer tray or container full of water - empty that after 30 minutes and again 30 minutes later if necessary. If, after a couple of weeks of increased watering, the leaves are still drying out, some shade from midday sun might be appropriate, although generally speaking, roses like as much sun as they can get.

Feed your roses too - I don't know what's available where you are, but you need a specialist rose food, one that's formulated only for roses, and use it as often as it says in the instructions on the box. Some are only to be used twice a year, depends what's in it.

Not the answer you're looking for? Browse other questions tagged diagnosis plant-care roses or ask your own question.

15
Is my Schefflera arboricola getting the right amount of light and water?
19
Why are my apples rotting on the tree?
4
Hapless rose bush diagnosis
4
What is this insect, which is drilling holes into my rose bush?
5
what are these insects on my roses and how to kill them?
5
Are these insect eggs on the bonsai?
5
Will these roses bloom this year?
8
Pinus sylvestris yellowing problem
1
How can I save my miniature roses?