When to pot on courgette seedling?

I think I made a mistake: I put (~15) seeds of courgette into a big bowl in seed-compost (low-nutrition).

Now one week later they are starting to sprout and I realize that this was maybe not the best choice as they will grow fast and develop roots quickly.

Can I wait one more week before potting them on into a small pot but this time with garden compost? Or should I act now before too many sensitive roots have developed? 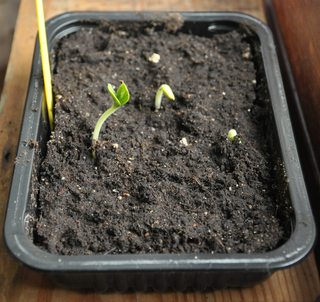 Do it as soon as the cotyledons open out, before the second set of leaves form, and when you do it, take a lump or mass of the soil in the tray surrounding the root so you don't have to disturb it - transfer it wholesale into a pot containing potting compost, not seed and cutting compost. Lift the seedling out from the bottom, holding the clump of soil rather than the stem or cotyledons. You can use your own garden compost instead, provided its been produced using a hot, aerobic system rather than a cool, anaerobic one.

If you are using POTS please do not use garden soil or pure compost!! Get some sterilized potting soil!! Sterilizing garden soil for pots is very smelly. Way cheaper and BETTER to just buy some premade potting soil. Compost is so very important but you still need soil. Little tiny rocks. Do not use pure compost. Bamboo, if you know something I don't about this please holler!! (She is so very good!!) Fill the entire pot with potting soil, no rock or gravel! Get bottom of pot off surface of patio or saucer so that there is air between the two hard surfaces. You can add mychorrhizae (I never get the spelling correct) and bacteria or find it already incorporated in the commercial potting soil.

Not the answer you're looking for? Browse other questions tagged seedlings zucchini or ask your own question.

8
What variety is this curvy courgette / zucchini with a bulge at the flower end?
6
Transplanting into seedling starter?
3
Will this pepper seedling survive being spilled from it's pot?
7
Why is my apple seedling shriveling up after like 15 min, every time I remove the plastic dome?
5
How should I use one courgette plant for both consumption and seeds?
5
Should I add soil with living things, like worms, to a potting mix?
5
What is this giant seedling?
4
Japanese Maple Seedlings Dying For No Apparent Reason
2
Almond twin seedling