Aloe plant is browning and the leaves are thinning

I have recently received a small Aloe plant that I wasn't able to identify past the genus. It does not look healthy, some leaves have become brownish, and their ends thin, as if squeezed out.

The plant is an offspring that has been separated and repotted in an IKEA substrate made of coir/coconut husk. This question describes the thinning and the answers identify a possible culprit in the soil, which I plan to substitute with the mix suggested in the accepted answer in this question.

What I wasn't able to find an answer to is the browning. It is likely that after repotting, the plant has received little to no sunlight for a month. Currently it receives a half day of sunlight (as much as Denmark can offer, anyway). Could the browning be related to sunlight deficiency(or excess)?

Another possibility I have considered is watering. I try to water according to the accepted answer here, but the soil type might be offsetting that. Should I adjust the watering to fit better with the temporary soil mix?

And finally—in case my assumptions are missing the mark—what other reasons there might be behind the browning and thinning of the leaves? Can I expect a recovery? 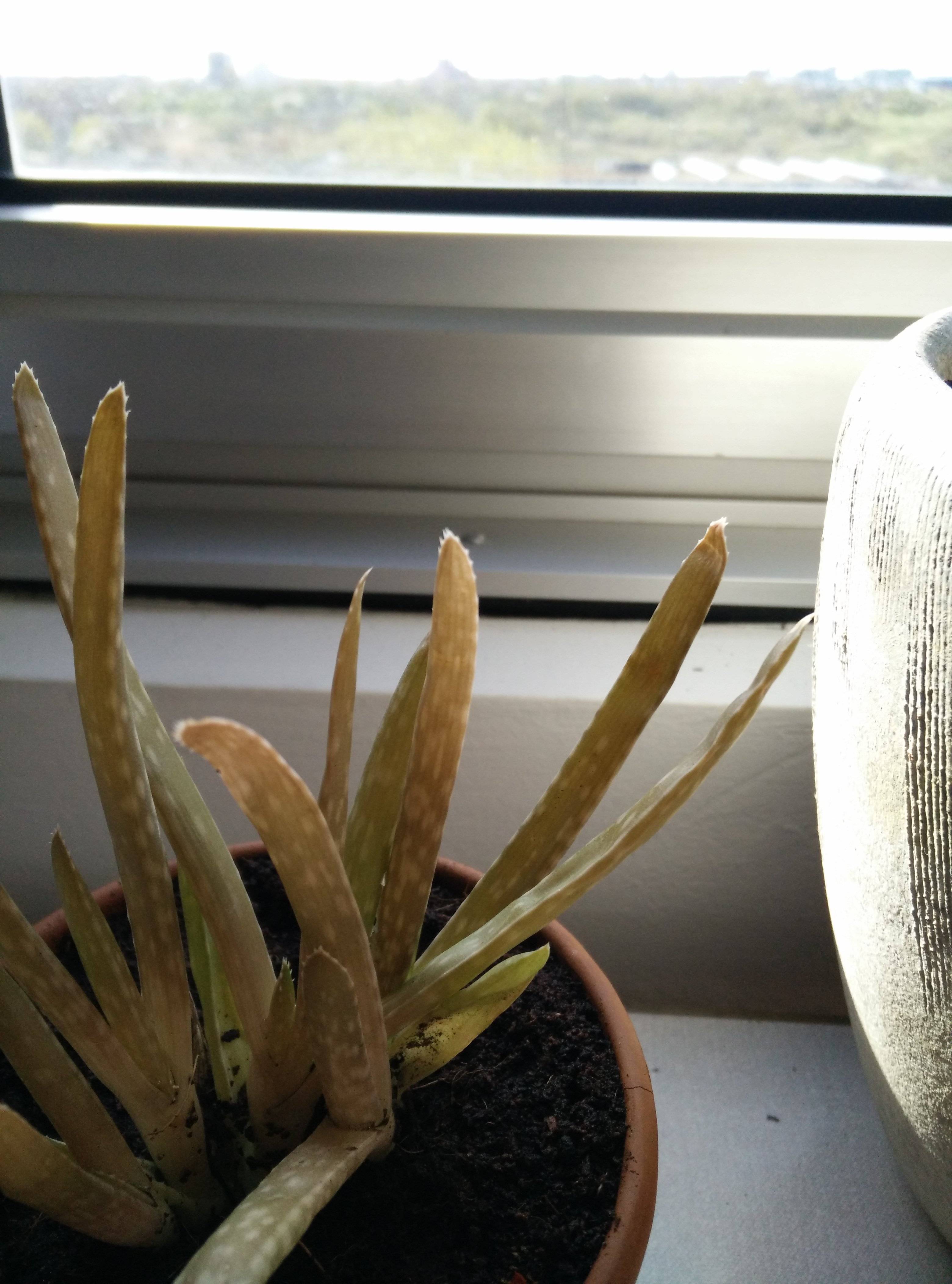 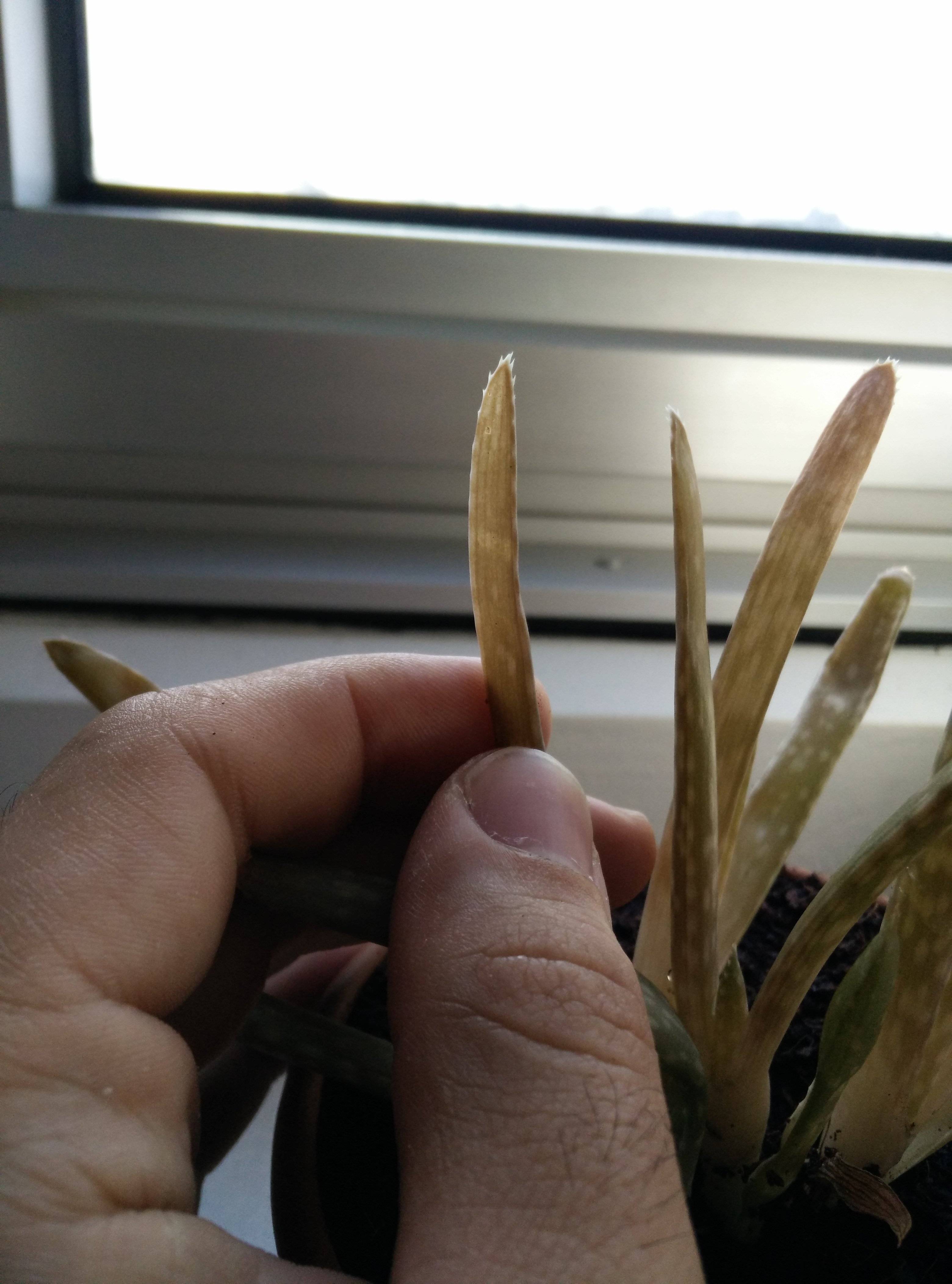 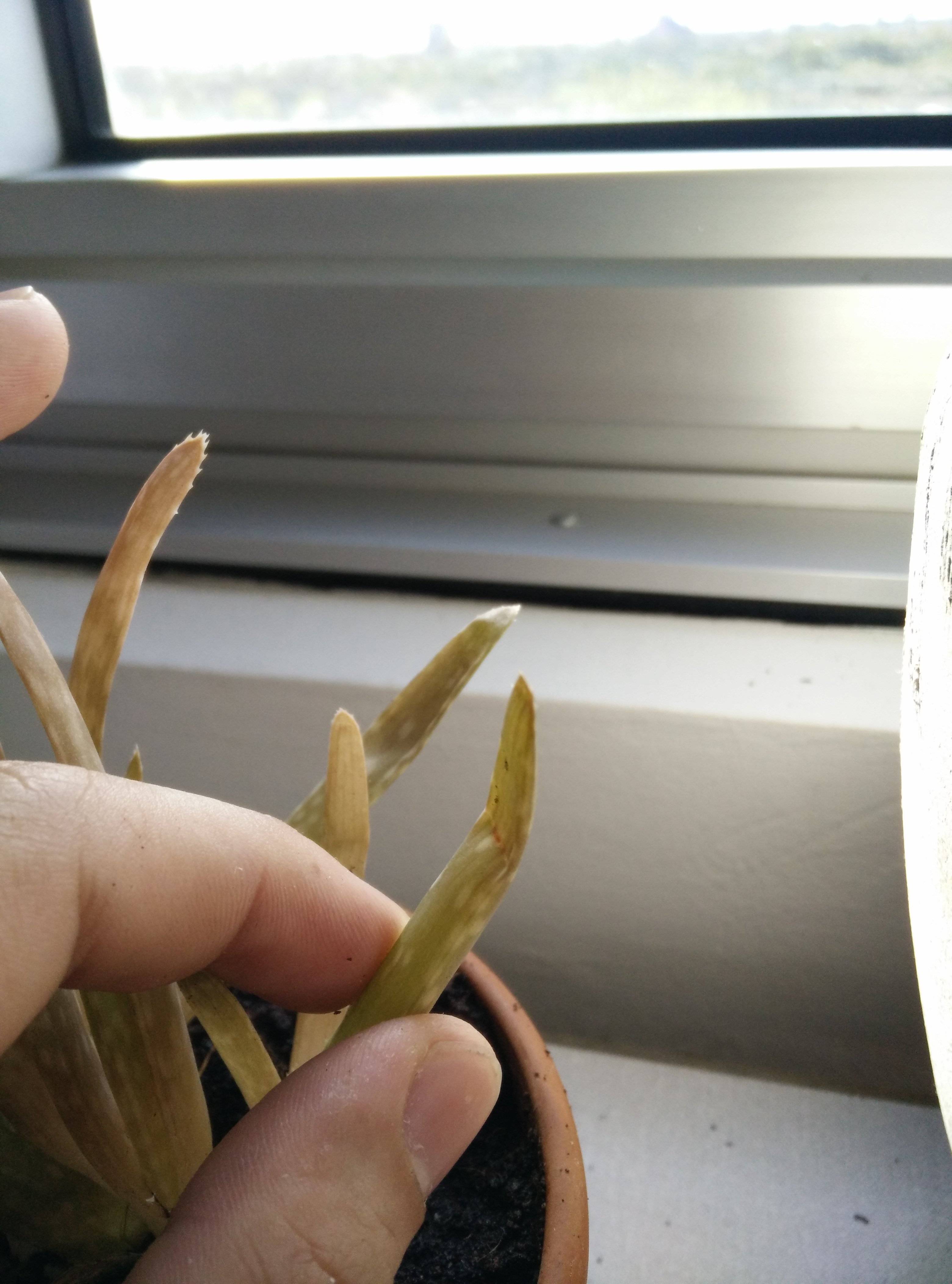 I think a couple of things are going on here. I think your other two questions will solve most of your issue. I don't know if your aloe will recover or not from the pictures. From my experience with other plants, when that many leaves look that yellow, then chances are slim that it will survive. You do have a few good leaves at the bottom.

So the aloe is a succulent and is very similar to a cactus. If we think of it that way, then it needs high amounts of bright sun, like a desert. It'll also have a sandy soil, which means it drains quickly. It has a thick flesh that absorbs water quickly and stores it for later use.

The substrate you have it in now will hold water for a very long time and it's probably started rotting the roots. On top of that, you say it isn't getting very much light. If I were you, I'd repot it very soon, with any well draining mixture you choose. You don't want anything that will hold very much water. Then you'll want to purchase a light that replicates sunlight as best you can. These usually don't cost very much. Set it about 8" above the plant and you can do it yourself or put a cheap timer on it to do about 8-10hrs of sunlight a day. When you water it, water it a lot, but then let it dry out and be dry for several day before watering again. In the desert, they have infrequent rainfall, so you mimic that. Dry soil and no rain, then a short downpour. I'd water it till it's coming out the bottom.

At first, I'd only let the soil be dry for a couple of days, then stretch it to maybe a week when the plant recovers. Keep in mind that at this point it has no reserves and little root to sustain it, so baby it. However, over watering it and keeping the soil moist all the time will kill whatever roots are left and finish it off. If you do this, I think there is a decent chance it will survive.

I'll tell you that plants can come back from drastic damage. I was propagating a Christmas cactus, which is somewhat similar, and didn't water it often enough. It dehydrated and looked like a skeleton with the veins standing out. I kept watering it and did so more frequently and it slowly puffed back out over time and is fine now. However, pouring a pint of water on it a day would probably have killed it. Good luck and I hope it recovers.

I know this is an old post, but wondering if the issue got better? I wanted to add, that I have the same plant, which I believe is Aloe chinensis (or, Aloe vera var. chinensis). Don't believe me? Look up pictures and tell me it's not the same thing!

I've had a number of these healthy plants for a long time, having grown them from pups from my mom's plant (which is still growing like crazy after 30 years!). I've always had them grow indoors on my window sill, where they get sun for a few hours a day. I recently moved them outside to get more sun and warmth (compared to my air conditioned apartment). I live in Washington, DC, so the days have been mild, in the mid to upper 70's. Within two days, they started to turn pale, and thin. They looked EXACTLY like your photos. So, I just brought them back inside, and I pruned the leaves that became thin and dry. Kept them away from the sun for a few days, and they've started to get that green color back. I guess they'll stay inside by the window. :)

I think it's been sitting in a really sunny location and it wasn't use it yet... Make sure it gets some water and move it away from the window a bit and move it closer in 2 weeks or so

Not the answer you're looking for? Browse other questions tagged diagnosis aloe or ask your own question.

15
Why are there kinks in my aloe vera leaves?
10
How much watering does aloe require?
4
What is the proper soil type for Aloe?
3
What variety is my Aloe?

15
Why are there kinks in my aloe vera leaves?
7
Aloe plant is yellowing slightly at the tips
11
Why are my aloe leaves turning white and brown?
4
Lemon plant dropping and browning leaves (indoors)
4
Why are the leaves on my Aloe Vera flattening?
3
Browning aloe leaves - what do I do?
0
My aloe Vera plant is getting flat leaves
0
The leaves of my aloe plant are growing stacked. Is that okay?