Identify plant and things on it (Possible Scale)

I've looked at other questions and I'm quite sure the plant outside my house has a scale problem. But I don't know much about gardening so I'd like some advice please. I found these other questions with photos that look similar:

These are my main questions:

To be honest I've not really paid much attention to the plant, I rent the house so I only need to keep the garden generally maintained. I found another website that suggested if it's a type of scale they could increase over months. Most of the branches I cut off were covered in them and I filled 2 average sized bin bags of cuttings.

After the first image the others of the plant are of parts I cut off. It was only half way through trimming the plant back when I noticed the things on it.

The second image below show more of the white things. The third image shows a bit more of a mix of black and white things. The fourth image is one of the higher newer looking branches that doesn't look to have as much of the things on it. The last image show my cutters, I noticed a yellow/orange looking substance on them.

Basically I'd decided the plant looked to need a bit of trimming, more so on the right where it was growing near the neighbors window.

I have one last question and feel free to tell me if I'm being daft. Is there any chance whatever they are could cause irritation on human skin or anything else unwanted? Would it be an issue to animals around the plant? We have quite a few cats on this street that walk under the plant. 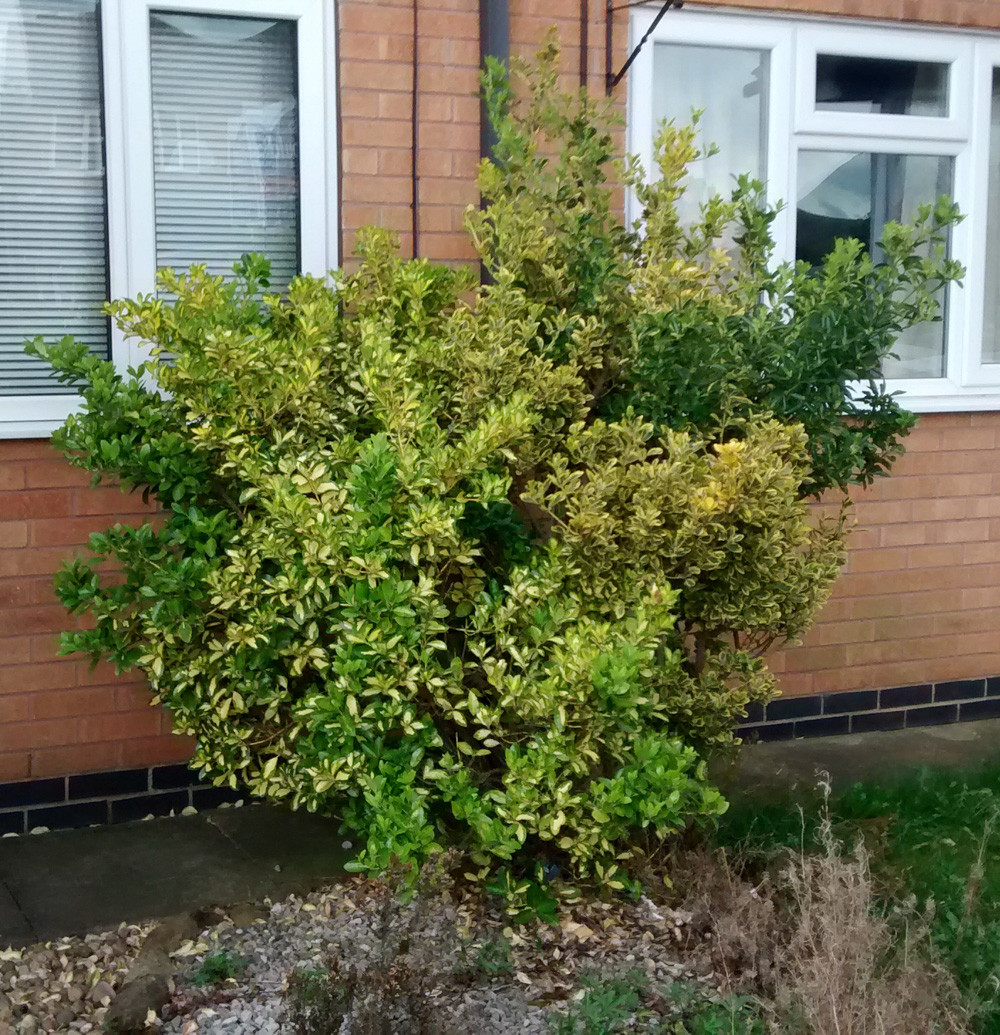 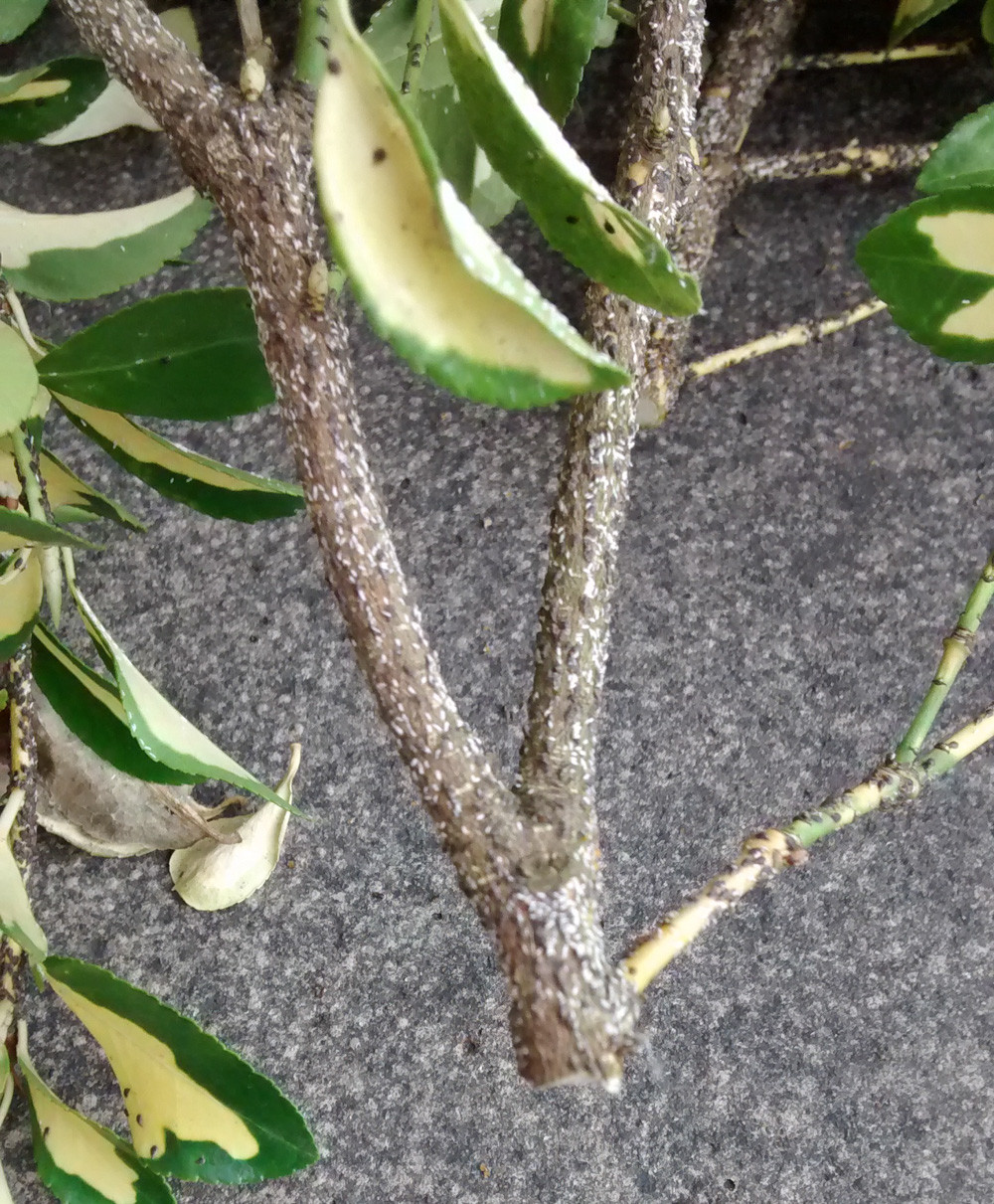 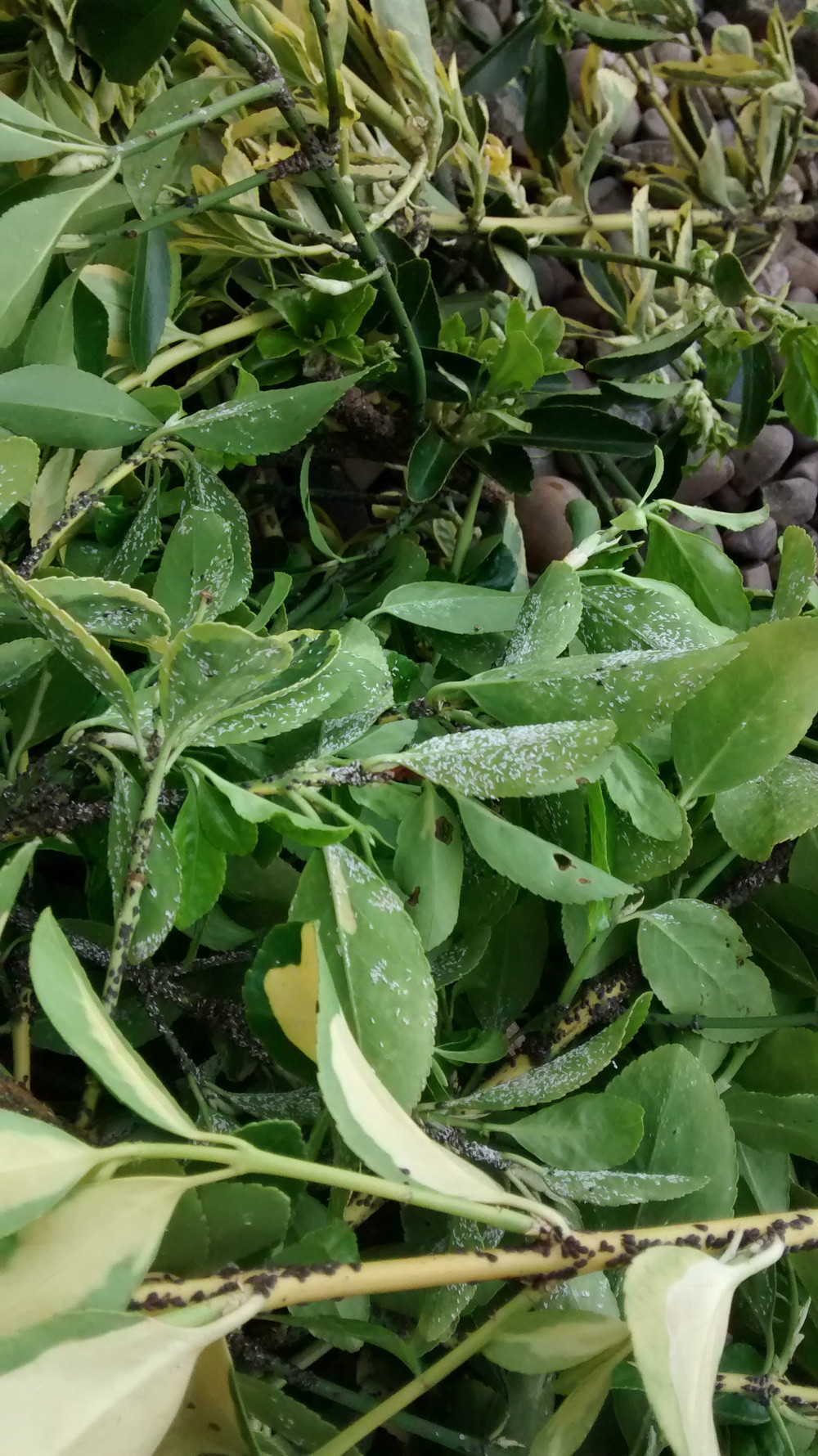 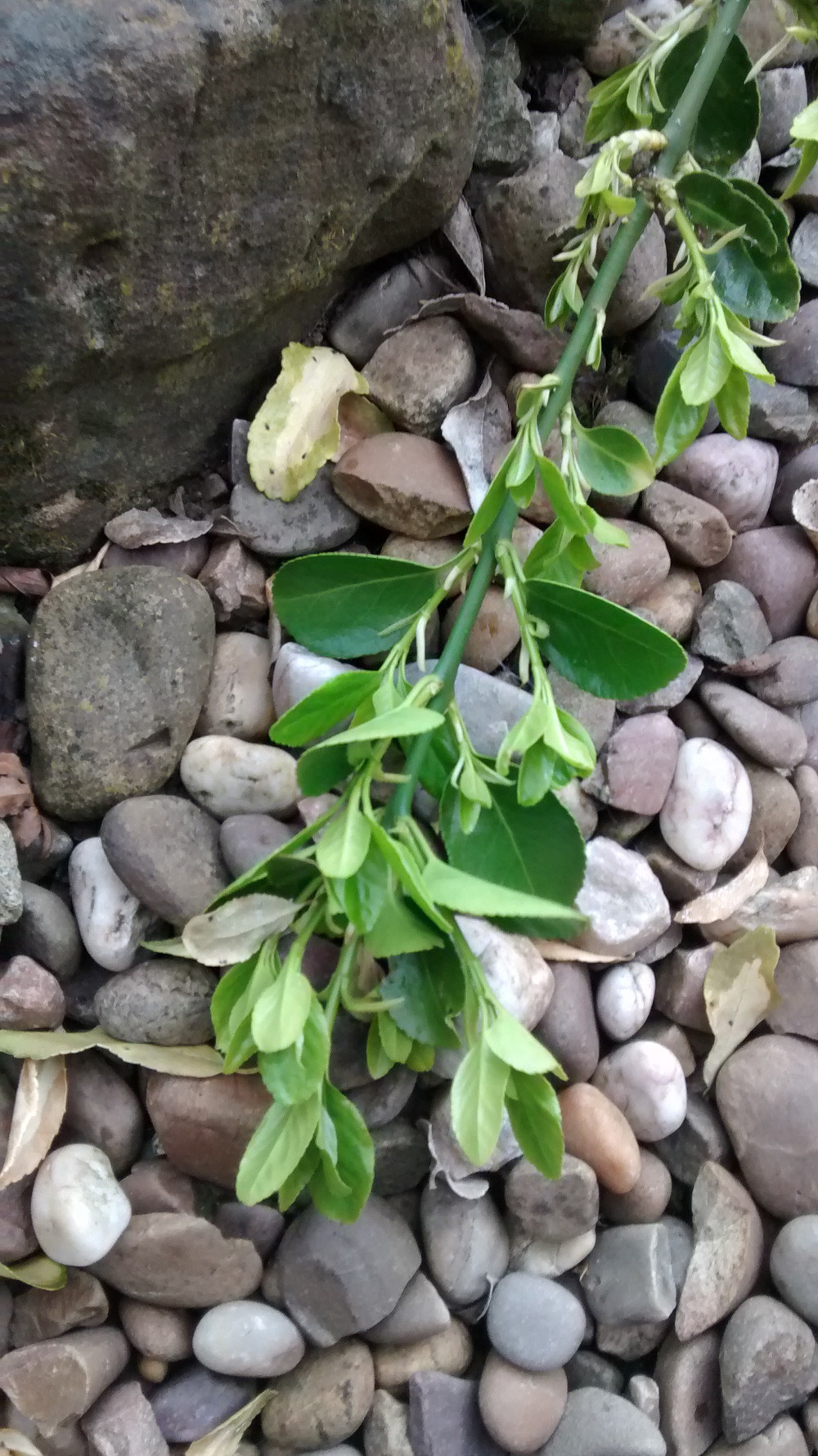 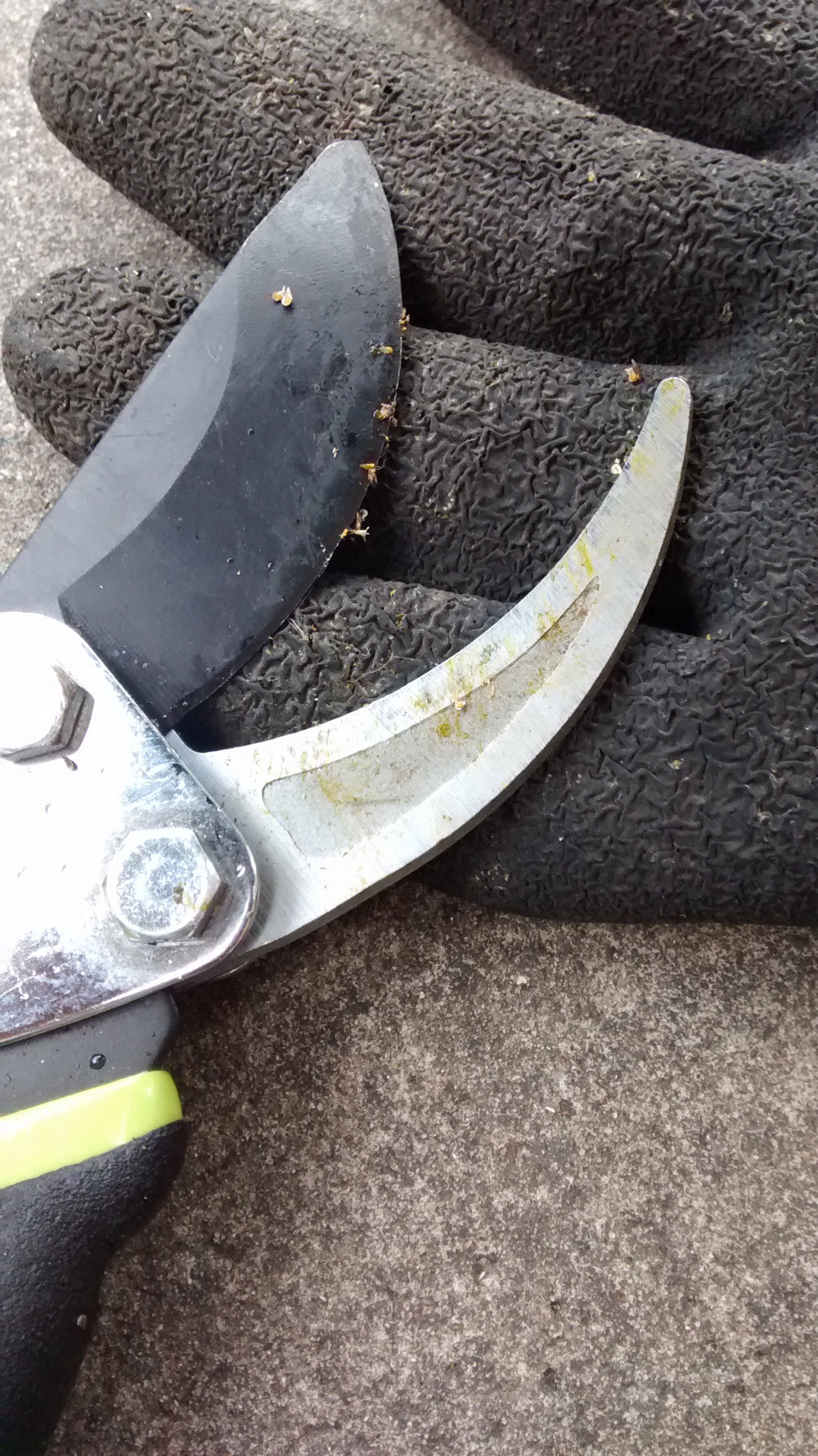 The plant is a Euonymus - hard to say which, because parts of it have reverted to plain green, but probably was originally Euonymus japonicus aureum. All branches which are entirely plain green should be removed at the base, from the trunk. Reshape to a size and overall appearance that you want - this plant responds well to pruning, but if you remove a lot of topgrowth, and because it's infested, give it a feed after pruning with a balanced fertiliser such as Growmore granules (NPK 7-7-7 if you want to find an alternative feed) raked or turned into the soil at the base. If the soil is currently dry, water it after putting down the feed.

Otherwise, its infested with Euonymus scale, a form of cushion scale which loves this plant - spray with Bayer Ultimate Fruit and Vegetable Bug killer, or Westland Resolva Bug killer, in June, when the nymphs have hatched (baby scale) because these are more vulnerable than adult scales. You may need to repeat the treatment in early September - spray thoroughly, including under the leaves and stems, until run off.

The plant itself isn't toxic (provided you don't use it for a salad), but try to exclude animals from the area when you're spraying with insecticide, and until the spray has dried. Best sprayed in late evening, when the bees have stopped working, and not on a windy day.

I can't identify the plant (does it flower? if so what do the flowers look like) but the infection is almost certainly scale. Hard to tell how long the infection is going on but it's certainly not brand new. I don't know of any reason why it would cause itching but it could be a mild reaction to sap from the bush you were pruning or just a case of mental suggestion, like your head itching when someone talks about lice.

12
Can anyone identify this abnormality that is on my dwarf citrus?
6
What is this black spotted disease on my orange tree?
4
White stripy things on trunk are killing my plant

5
What are the black spots on my basil's leaves?
6
Is this colored (brown, red, yellow) and hairy caterpillar dangerous for my strawberries?
6
What are these white things on the conifers in my garden?
3
What are these seeds?
4
getting rid of scale bugs by submerging
6
Please help identify this plant
2
How can I control scale insects on an indoor olive?
0
Citrus treatment for scale bugs and whether fruit is edible
3
What are these bugs infesting my jade plant and what to do about them?