How should I remove long grasses/roots to prepare a fresh bed?

I am currently attempting to remove a bunch of dead grass in a roughly 5'x5' plot. When the grass fully grows sometime in early-to-mid summer, they are like very small, long-grassed shrubs, sort of like this but smaller and closer to the ground. It basically covers the area in numerous bunches.

The area also has a lot of of weeds - some sort of thistle, I think - which I also would like to remove.

I tried doing it by hand but it took a lot of effort to remove the sod, particularly because the roots are thicker than the average lawn grass root and because they extend around 4"-6" into the soil.

I was wondering what the best method would be to go about doing this. I was thinking about renting a soil tiller to rip up the roots, since I have another clear plot on which I plan on using. If I do it this way, should I remove all the weeds first before tilling or can I rake them out after the roots are pulled up? (The weeds have just emerged and will not go to seed soon.)

Additionally, if I should remove the roots by continuing to use a grub hoe, how can I loosen the sod of its soil so that only the roots remain? I'd like to leave as much matter in the area as possible. I also noticed the roots had nodules, which I assume are for nitrogen fixation. Is there any way to take advantage of that, perhaps leaving them in the dirt to decompose?

Or should I just smother the area with tarp/cardboard/newspaper/mulch and make a "lasagna garden"?

Pictures for clarity: Section that I've already removed, with the suggested tool; removed sod; roots; close up of roots with nodules. 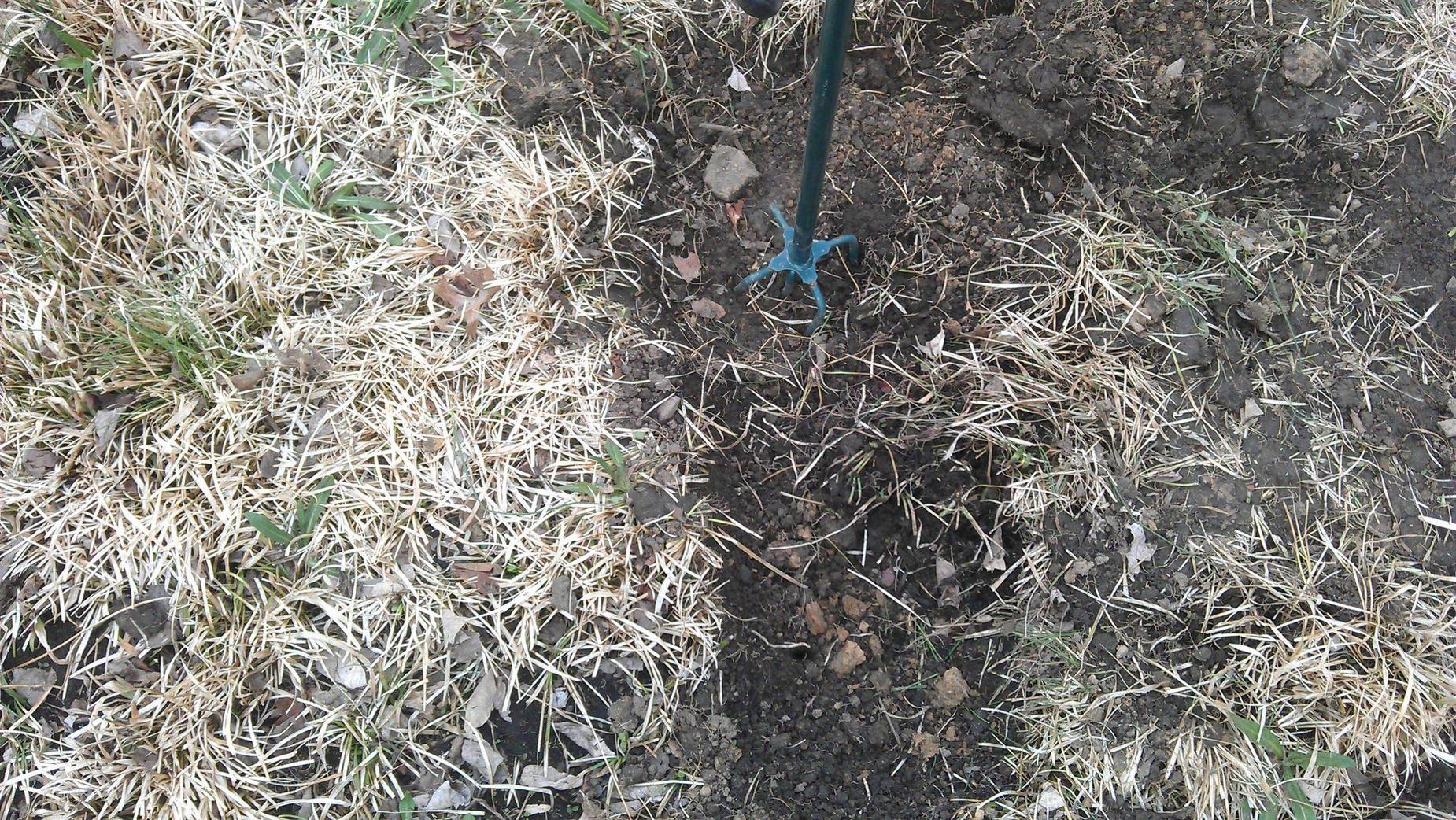 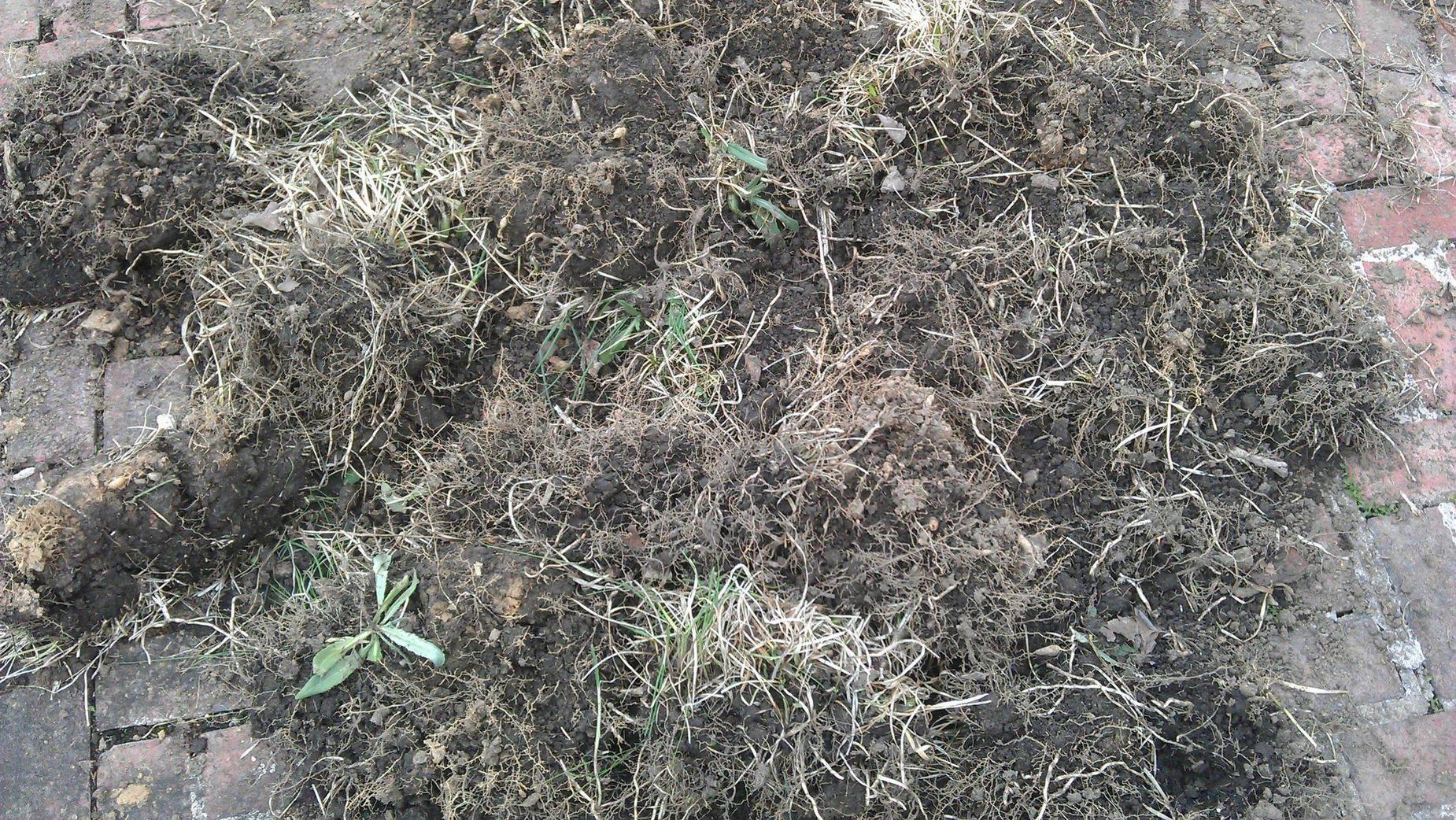 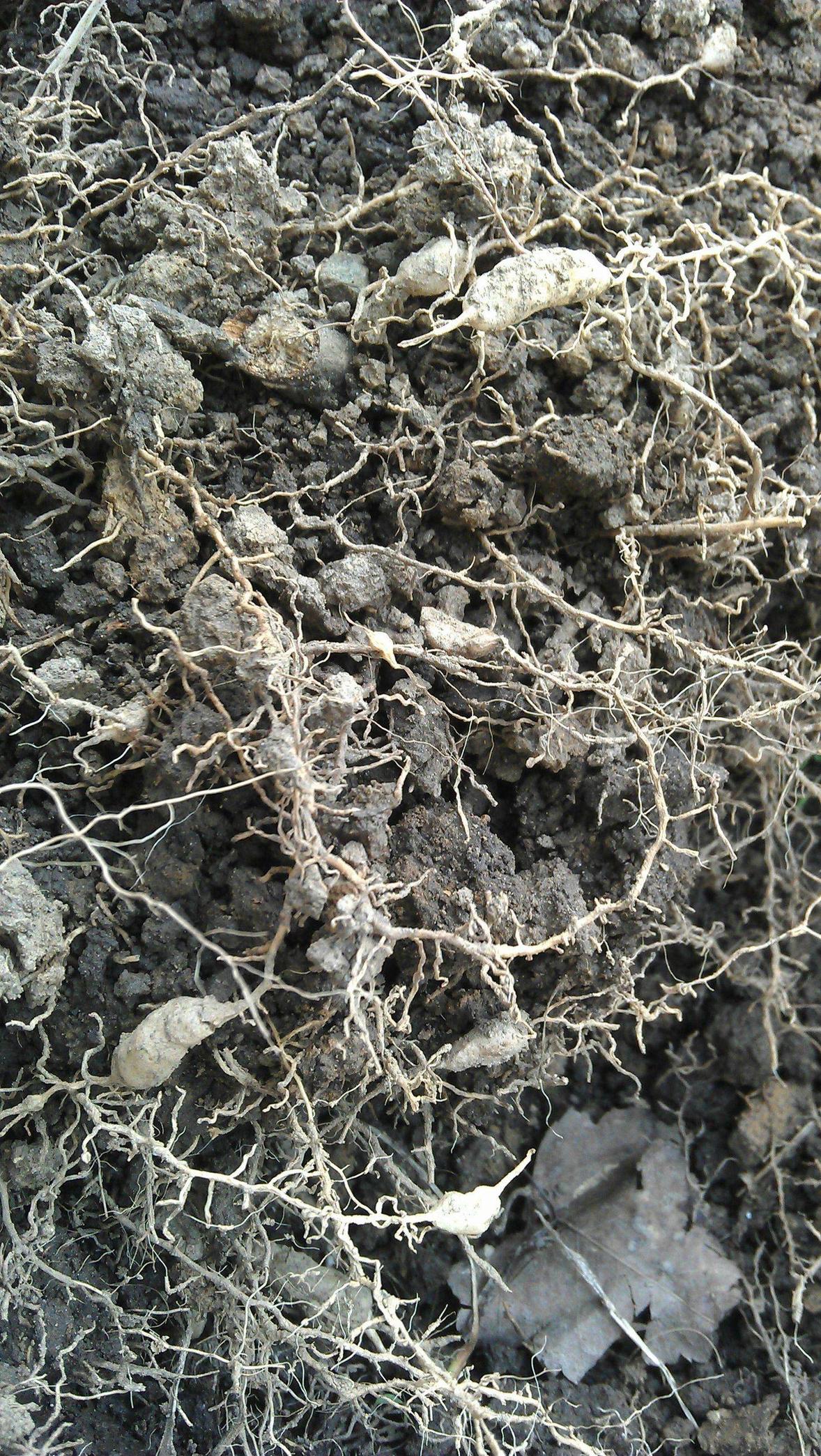 For a 5x5 foot (or even meter) plot I'd just use something like this: 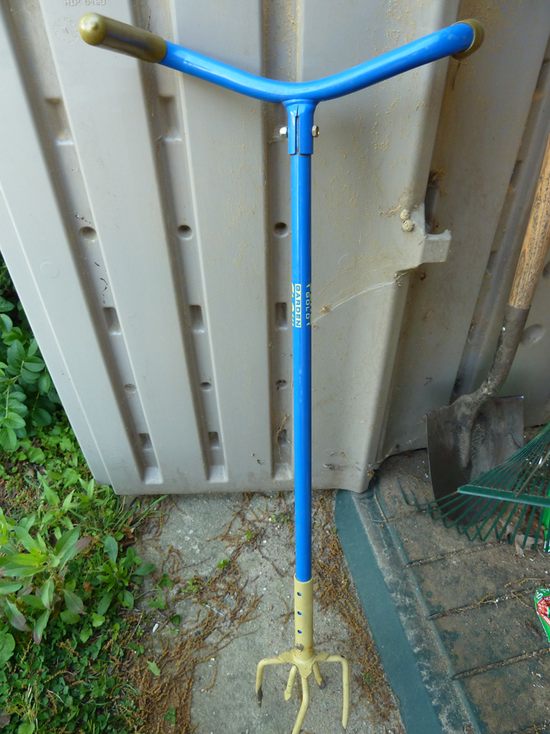 To rip out the clumps - rototillers can be remarkably less capable of dealing with heavy sod than you'd like to think, and the small area makes renting one seem like a waste of money (IMHO) - this type of tool makes it easy to stand up and rip out the roots of difficult clumping weeds, and it's a lot easier to get the weed clumps off the spikes of this than out from between the tines of my rototiller and its lower transmission housing, where they like to pack. The fact that the handles are wider than the tines means you have leverage for twisting out with more force than a "direct" method gives you.

Running the lawnmower over the dead tops now and mulching it to death might well be another viable option, depending how much undead zombie weed life-force the stuff has got. Skip the tarp unless you don't want to grow anything there this year - in point of fact, skip the tarp period - if you are going to use a "plastic layer" either clear or black polyethylene works better at "solarizing" - but a simple non-plastic mulch is generally fine unless you are up against nasty weeds (which thistle is) in a large area (which this is not) - just rip out any thistles when they are tiny, tiny tiny - don't let them get big and annoying.

Use roundup grass & weed killer on everything in the area you with to plant fresh. Make sure you purchase the short acting Round Up, the red bottle, not the purple bottle, (the purple bottle sticks around months and inhibits new growth.) So I use the red bottle round up. Then I wait for all the weeds to dry out and I cut the grass/weeds down real close with the mower picking up everything as I go by in the collection bag. After I kill everything, and then dig out everything, I water the area and wait a few days to see if the remaining weed "seeds" produce fresh weeds. If so, I repeat the process until most weeds are completely eliminated. Then I prepare the soil by loosening the entire area with a hand twister tool, chop up and turn over 4 or 5 inches or more of soil. Then I cover the entire area with peat moss and mix into soil. I then cover with starter fertilizer. (Easy to find, look for starter fertilizer). Once I have that all done... I lay down the seed heavy and even and tap it down so it does not blow away. I water two times a day. Grass will germinate within 12 days and will be lush within a month. Good Luck.

Not the answer you're looking for? Browse other questions tagged vegetables soil weeds roots tilling or ask your own question.

4
How can I convert a mulched bed to dirt, and should I?
4
Returning a garden paved for 30 years with packed clay below, back to lawn
1
To Line or Not To Line a raised bed's perimeter?
1
Improving my first garden plot and stopping weeds
0
Manage weeds around parkway strip with maple trees
6
How/When to Remove Dead Weeds and Reseed Lawn?
1
Redoing the lawn and improving soil
2
What is this awful leafy plant that's taking over my lawn, and how to get rid of it?
3
Someone please help identify these two pictures