What is this plant with long fronds for leaves?

I took this plant from a friend on a whim as he was going to throw it away, so I would like to know its name. The soil is red because I live in the Deccan plateau in India. The pot has a hole below to allow drainage, and I water it every morning. 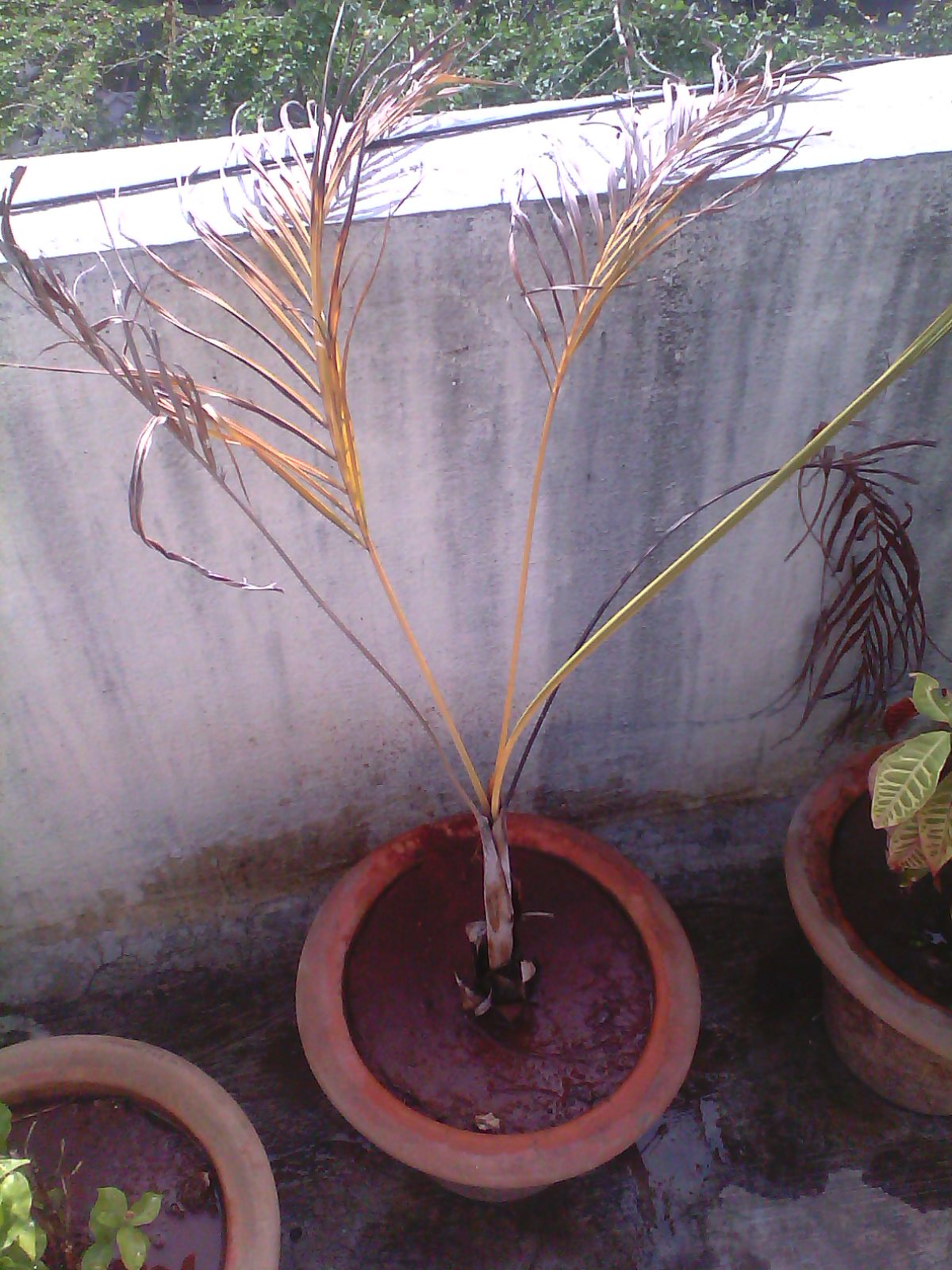 Well, this was a palm of some sort, hard to say which, it looks as if its actually dead because I can't see anything growing from the centre. If there is anything still green in the middle, it might be worth trying to rescue it if you really want to try, otherwise, bin this one.

Re houseplants; when a plant has been kept indoors, if your climate is suitable for it outside, it must first be acclimatized to being outside, gradually. Many indoor plants suffer sunburn if exposed to hot sun, and many cannot cope with the extremes of temperature that may occur between day and night.

You've said there is drainage in the pots, and water can get out. You've also said you've used ordinary garden soil - unless they were growing in that initially, this was not a good idea, it's always best to use potting compost because garden soil may contain pathogens - these pathogens may be fine in open ground, not causing any trouble, but once contained in a pot, then no plant can escape because there's nowhere else for the roots, or the pathogen, to go. The other reason for using potting compost is that different plants prefer different types of soil for their roots - if the garden soil you use is heavy and claggy, and you use it for something like a palm which prefers a lighter mix, then that doesn't make for a healthy plant either. I also note that most of the pots you showed appeared to have standing water in the soil, or, as in this picture, the soil looks almost sloppy with water, indicating that the soil is poor draining anyway. Whilst many plants will grow in open ground with such soil, using it in pots really isn't a great idea.

Some houseplants will never do well outside - I recall one of your pictures was of a very defoliated Ficus benjamina, and that one is really fussy - it cannot stand draughts or changes in temperature, and does not appreciate any sun at all, preferring simply bright daylight. Some plants like shade, some dappled sunlight, some are fine in full sun (once acclimatized) provided they're sufficiently well watered, it varies according to the plant.

I'd be careful not to overwater, and hedge your bets by putting it in neither direct sunlight or deep shade. Also don't cut off the dying leaves as apparently these hold nutrients. This is just stuff I've found in this article http://www.florida-palm-trees.com/save-dying-palm-tree/

I had something similar die and it was due to lack of watering. It didn't bounce back, it had completely dried out, yours has some green from the looks of the picture so maybe all is not lost.