I bought this small spruce for Christmas (the label said it will grow up to 1m tall), it's a Picea Glauca 'conica'.

I recently replanted it in a bigger container, because it looked quite constrained, and had many yellow needles.

While transplanting it, I noticed very wet root conditions, so I tried to keep it quite dry the rest of the soil and pruned the lower branches to improve aeration. I used Peat Moss, horticultural sand, some compost and little vermiculite.

Well, apparently it isn't liking it, or it suffered the stress.

Also, it can be important info, it has been unusually hot in the last two weeks. Now it's going back to normal UK weather. Any ideas? 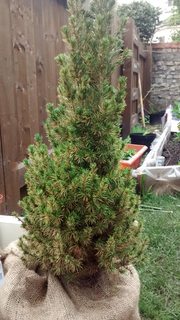 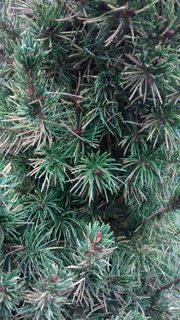 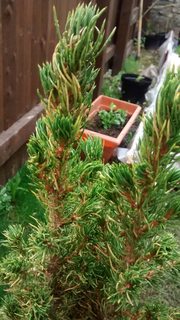 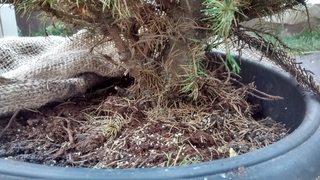 Some ideas, a few questions. I hope the container you've transferred it to has open drainage holes at the bottom, and that you don't leave it standing in any outer tray which has water in it all the time. It's also not clear whether you had this tree indoors during the Christmas period, and then moved it straight outside once the festivities were over.

Picea does not like soil which dries out all the time, preferring moist but well drained conditions. If you left yours in a container without drainage holes, or the drainage holes were blocked, no plant likes to be in wet soil which cannot drain because it becomes toxic to the plant. They prefer neutral to acid soil conditions. If you did not water it in well when you potted it on, do so now, allowing excess to drain freely. Ongoing, water when you can feel the top of the compost is slightly dry to the touch, and water copiously, always allowing it to drain freely.

Check the plant closely, looking for striped banding on the needles, any patchy white areas, or fungal pustules or even evidence of insects. If you find nothing, then likely the needle drop, whilst possibly being slightly more than normal, is primarily regular leaf loss, which does occur even with evergreens. I reiterate, keep it well watered, but make sure excess drains away out the bottom - other than that, there's not much you can do. As you're in the UK, there are fewer diseases/infestations here that can affect your tree, so, without further evidence, its likely the problem its displaying is/was cultural.

As the weather is set to warm up significantly again by the end of the week, its sensible to keep it out of hot sun until it has fully recovered. You will find that all yellowing needles will eventually turn brown and drop off; the time to worry is if the yellowing continues and spreads after a couple of weeks.

UPDATED ANSWER: Sounds like you might have green spruce aphid or similar on the tree then, in which case, its worth spraying, as its a small tree, although there's not much point in doing it now, they're active over winter up to end of March. You'll need to get Westland Resolva Bug Killer or Bug Clear Ultra - best time to spray is late August/early September, and again in winter if necessary. Spray thoroughly to run off, trying to get the spray on all parts. In the meantime, give it a general purpose feed in 3 weeks or so (assuming the potting compost you used was fresh and new), and keep it well watered, treat it as if its in intensive care and you need to nurse it!

Needles live on spruce trees for 2 to 3 years then drop. You don't notice this on most trees, as the bare twigs are on the interior of the tree.

Few spruce tolerate root immersion for more than a few days during the active growth period. P. glauca tolerates immersion in spring during the melt. -- O2 demand by the roots is low, since the top is still dormant, and cold water carries more O2.

Overwatering results in root death. Then, with roots unable to move water, the top shows the same symptoms as drought.

Most spruce have a chilling requirement -- a minimum number of hours below 5 C before they will break bud. This can vary both by species and provenance. I've read figures as low as 300 for coastal sitca spruce to as high as 1300 for interior white/engelmann spruce.

P. glauca var conica is very susceptable to small bug infestations due to the branch density. A normal P. glauca is open enough that birds and larger predatory insects have free access to the needles, and keep the pests in check.

Not the answer you're looking for? Browse other questions tagged trees transplanting spruces conifers or ask your own question.

13
What causes spruce branches to drop their needles?
9
Is there a way to compost these spruce needles?
5
When to transplant spruce tree sprout from a small bucket
6
How do we revive Spruce trees that lost 50% of their needles after a flood?
4
Why are my spruce trees' very long leaders bent over?
1
Should I worry about planting nonnative Norway spruce in NY?
5
Very few needles on lower spruce branches
0
Does white spruce have new growth only in spring?