Does this orchid have a viable stem? If not, will it grow one if transplanted to a larger pot?

I received a Phalaenopsis Orchid as a Valentine's Day present. It was in a glass vase, and atop the straight stem, which was held to a support stick by a hair clip, were two lovely pink flowers. It looked great until last week, when the flowers fell off, and the stem started bending over.

I carefully lifted it out of the glass, and saw strings of moss coming out of the bottom of the little cup, so I assume what it needs is a transfer to a bigger pot. There are good instructions for that in some other questions here, but my question pertains to this plant's viability.

The tall stem is shriveling more each day, and I thought it had buds, but they're just empty brown pods. There seem to be two other small stems peeking up over the edge of the cup, but they don't look healthy either.

The leaves are a nice color and texture, though, and the plant base looks okay. Also, there are two bright green things in the moss, which I think are healthy roots. Currently it's sitting on top of an empty jar. I know I have to do something, unless it's too late.

Will any of the existing stems bloom? If not, will new stems grow if it's in a larger pot? 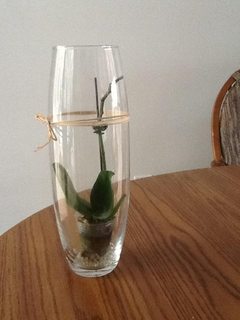 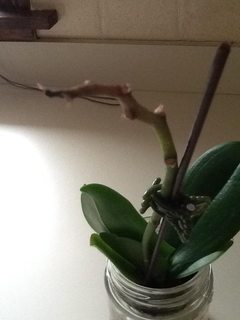 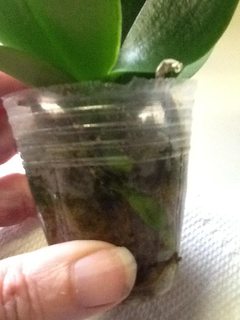 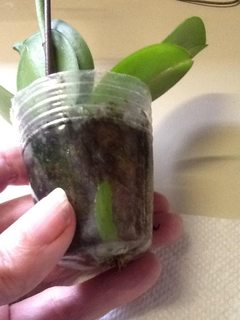 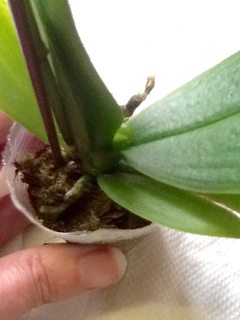 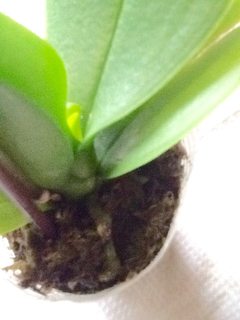 Ok, first some clarification or base phalenopsis anatomy:

If the flowers have fallen off, the flower stem may or may not re-bloom. Unless it's really dried out, do not cut it off. You may trim the dry parts, though. Sometimes - and this is no promise - one of the dormant buds (what you called dry shells) will develop a shorter new flower stem or even a "baby plant", called a "keiki". New flower stalks will emerge from the base. Just take a look at the one you have, a new one will grow from a similar place a leaf or so higher up.

The greyish roots that are leaving the pot are ok (they are healthy & the colour is normal), Phalaenopsises have a tendency to "spill" out of their pot. Do not confuse orchids with other house plants. In most orchids, roots participate in photosynthesis, for example, that's why the roots are green and they love transpararent pots. You could grow the plant in an orchid basket instead of in a regular plastic pot, but that's not advisable for beginners.

I personally would be tempted to plant it in a slightly larger pot. Not because it's root-bound, but because a bit more potting mix allows for a bit more leeway in watering ;-) Make sure you use a proper orchid mix, never, never regular potting soil. If you decide against repotting, at least take it out from the second glass jar, it appears that the leaves get all bunched up (picture top right).

I'm not an expert by any means, but I have several orchids that are doing well and just saw a spike starting on one today. I tend to research a lot on anything I'm interested in and I'll tell you what I believe based on what I've read and experienced. You can feel free to confirm anything I tell you.

Firstly, that's a young Phalaenopsis orchid. I bought 4 the same size over the winter that were in Lowe's "We pretty much killed them, so we're selling them at a step discount' section. They were in similar pots to your current orchid, though not in a glass vase. The vase served two purposes. One is that it made it look fancy and two, it raised the humidity. Neither one is bad, and they enjoy higher humidity, but you'll want to take it out of that vase for a couple of reasons. One is that, as the plant grows it'll get squished up in there and two, orchids of any type need excellent drainage and you won't be able to provide that in the vase. It's also going to be hard to remove it for watering. On a side note, that vase might be good for putting a small water plant in with a few river rocks at the bottom.

Following up on the drainage issue. Most orchids are epiphytes, meaning that they grow in trees. With this in mind, think of how they grow and get water and light. The canopy of the tree will give them strong filtered light, they get water from rain, so they have to absorb it quickly and then go dry till the next shower, and they also cling to the bark of the tree so they're roots are exposed to lots of air flow.

In the pot they're currently in, you have what appears to be one small hole in the bottom with damp sphagnum moss packed around the roots. This means that it is constantly holding damp material around the roots with almost no air flow. This leads to root rot and plant death. The reason they do it is because the plants will stay alive longer with that than they would if they weren't watered at all, but if you plan to keep the plant for any length of time, it needs to be transplanted into a proper media.

You can find orchid pots or you can take a plastic pot and drill .25-.50" holes in several places around the side and the bottom. For the mix, you can look up different recipes on the internet. What you'll find is that most places say the more inorganic matter the better, but the more often you'll have to water. It'll be up to you to decide how often that is. What I like to do is to combine orchid bark with small chunks of sphagnum moss. This seems to work out pretty well. For the most part you have the bark which will absorb some water and the plant can leach it out over a week or so and the small pockets of sphagnum moss will hold extra water to act as a buffer for your plant.

Here are a few more things to keep in mind. One is that phals will often rebloom. The little brown pods you were referring to are most likely the node on the spike. The flower stalk is called the 'spike'. Those little leaves are coverings and you can get another spike to grow out of them or sometimes a whole other plant called a keiki. They even have pastes you apply to the not to encourage keiki growth as growing any orchid from seed is a difficult process, potentially requiring lab grade sterilization practices from what I've seen. However, in this instance, it'll most likely be a drain on the plant and I'd remove it and wait for the next one.

It's hard to tell, but your plants leaves look slightly wrinkled, indicating dehydration. Since it's been in the wet moss, I assume it'd because of root rot. It does look like you have some good, healthy roots, so I'd repot and clip the dead, brown, mushy roots with a pair of sterilized clippers.

About repotting, keep in mind that the roots adapt to their surroundings. You shouldn't bury 'air roots', which would be the ones sticking up from the base and trying to go over the edge of the pot. Inversely, you shouldn't expose buried roots if possible. From what I've read, it's best to do a repotting when you have growth, but no flowers, as a drastic change in media, sphagnum to bark in this instance, causes the adapted roots to die. They hang in there long enough for the new roots to grow and become adapted to the new media.

So to summarize, we need to repot, outside of the vase, into a orchid pot that has plenty of drainage and air circulation. We'll clip any dead roots and repot with orchid bark and sphagnum moss, doing your best to keep air roots above ground and vice versa. Then we'll either soak the orchid for 15-30min once a week (adjust as necessary for your climate) or water from the top thoroughly at regular interval. You should get an orchid fertilizer and apply recommended levels about once a month. I would get the one for growth and not flowers till it's established. Keep it in a bright location, but a place where no sun beams are directly sitting on it to burn the leaves. I tend to keep mine in the bathroom by a window, especially when repotted for the humidity it get while recovering from repotting.

Lastly, you need to look at pot size as I've heard too large of a pot is bad. The bark absorbs the water before the plant can get to it. There is a rough pot size to plant ratio I can't remember. I think a 3-4" pot would be good for one this size. It'll allow 2-3 years growth before you'll need to repot anyway from the media breaking down and suffocating the roots like the sphagnum is doing now. Good luck.

Not the answer you're looking for? Browse other questions tagged houseplants plant-health growth orchids or ask your own question.

16
My orchid has one yellowing leaf. What's gone wrong?
7
Why does my holiday cactus have a three cornered stem segment?
5
Letting basil loose. Will it die?
4
Extending Life of Cut Flowers
3
What's Wrong with this Orchid?
4
Help! My Song of India (Dracaena reflexa) plant is dying!
3
Will this plant grow in pot?
0
Should I re-pot this orchid?
3
Why does my orchid have spots on its leaves?