How to make a galvanized steel stock tank in to self watering planter?

We got a galvanized steel stock tank (thanks Pinterest) to use as a planter for a raised flower bed similar in size and weight to this stock tank.

How would we add a self watering tray/container/tube system beneath the soil inside the planter?

What type of platform can we build or buy that's sturdy enough to raise our planter two more feet and support the weight of all the soil inside it?

Update: got this Tarter built John Deere branded stock tank that's 2' by 2' by 4'. It's tall enough so no longer need cinder blocks. 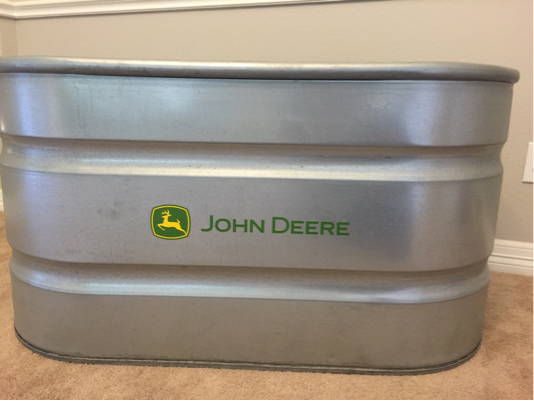 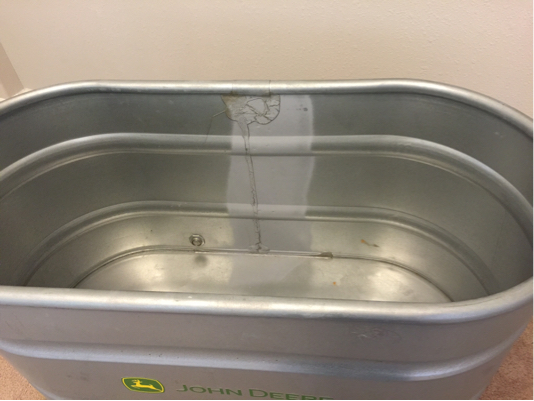 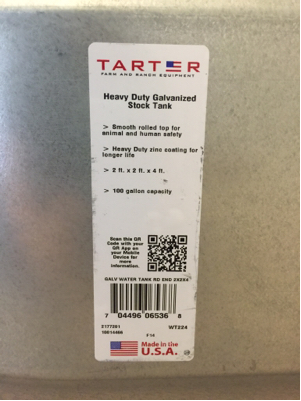 Adding a overflow to just above the self watering tubes. This will allow the proper amount of water storage and outflow accordingly.

Cinder blocks are probably the best option for the base, but maybe you can run a corrugated galvanized steel roofing material that can be cut to line the bottom of the tank. 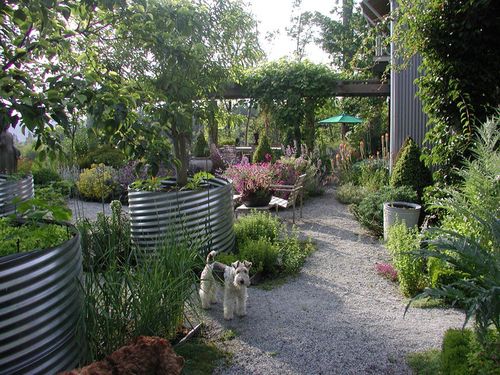 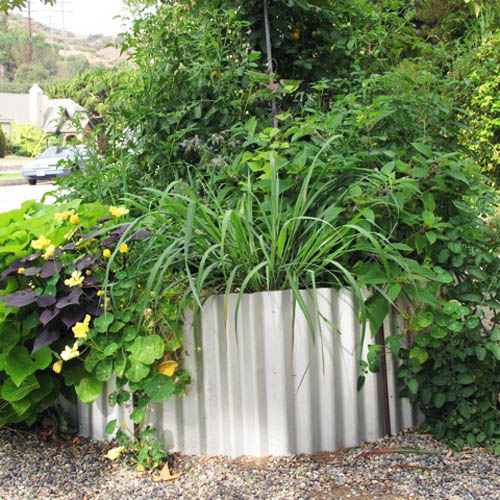 I'm been messing with small versions of these, making 2 liter soda bottles of them to start seeds and propagate cuttings. I've had really good success with lemon seeds, but I've been a little disappointed with the other plants. I don't know if it's the temperature and humidity difference in the house in winter as opposed to in the sun in summer, but my other plants have been slow growing an wimpy. I feel like part of the reason is that the self watering keeps the soil moist and the plants don't have to strive for water to grow a stronger root system, which in turn makes a bigger healthier plant.

However, if I was going to make this system on a scale like you're talking about, I'd do it one of a couple of different ways. One way is to get one of the long flat rubber-maid containers, like goes under your bed. I'd seal the lid to the body with non-toxic silicone. I'd run a 3-4" piece of pvc down through the lid and seal that with the silicone. I'd cut notches out of the bottom, so that it can press tightly to the bottom and seal the water in the fill tube. I'd drill several holes around the outside of the box, roughly .5-1" in diameter. A hole saw would work great. Then I'd find a cloth to wad in those holes as tightly as possible. Get your self a new set of sock and use your old work socks. Put the contraption in the bottom of your stock tank and fill with dirt. In time when the dirt is settled, you can cut the top of the pvc pipe off a few inches above the dirt. Painting the top with an earth color will make it blend in better when it's cut off. You could get and end cap to put on it as well to keep debris out and stop any small amount of evaporation. You could even put a piece of screen over the hole, bend it down the sides a couple of inches and zip tie or glue it in place. The cap would still go down over it. You won't be able to easily clean this thing out later. You can easily fill this up. The silicone will keep it from leaking out to fast and you should be able to fill the tube to the top for extra water. The dirt should only wick what it needs. You could, of course, use a bigger container to hold more water. Roots would go down around it. I'd put the holes near the bottom, though.

Another option is to fill the bottom 1' with chunky sized rocks. Let the dirt go down between the rocks, actually putting in a little dirt and watering it in to make sure it gets packed in between them. This will do your wicking for you. Then back fill with the dirt. Again, you're going to use the pvc pipe to fill it up. This method is easier, but you'll have a problem with it taking a long time to refill as the water now has to permeate the dirt between the rocks. A combination of the two might be the best bet. The container to take water quickly and then it would seep into the rock layer and you can refill then container again quickly. You might have to fill it twice one afternoon, but then it'll be good for a long while. Make sure to put the wicks in the lid when you do this to get good dirt to wick contact.

A couple of additional tweaks I'd do is to drill a hole .5-1" in diameter approximately level with the top of the reservoir, be it rock, container, or whatever. Back it with a layer or two of porch screen and then a piece of hardware cloth. This will let you drain your over flow. I'd attach it with some silicone I had out and probably a zip tie or 3.

A last tweak you can do is to make a level gauge. Take something like a dowel rod, put it in a ping pong ball and glue around it to seal it up tight. Drop the dowel to the bottom of the pvc pipe and mark where it meets the top of the pvc pipe. Keep in mind, it need to be at the pvc's final height. Then pull it out and mark it 2-3" lower down. That is your warning mark and the first mark is your empty line. If I was going to go over board, I'd drill a small hole through the end of the dowel and another 6" piece as well. You could put a little red flag on the end of the 6" piece and run something like a short length of wire through the holes and bend the ends or tie them together. You'd need to shorten the length of the main dowel, but as the water level drops, the ping pong ball and dowel will drop, causing the short piece to hit the edge of the pvc pipe and pivot upwards. It would raise the little flag upright when the water is empty. You could even poke a hole in the center of the screen you're using to keep debris out and thread this through.

As for raising it, you can use any number of things. Cinder blocks, rail road ties, a frame build of metal or 4x4's. I even saw one of these one wheels in a drive way to provide privacy. It had bamboo in it and they could roll it out of the way at need. You can plant things at the base to hide the frame.

One last thing to consider is how deep your roots will go. A stock tank is deep and not many plants you'd put in a container that size will even put roots that deep. You're adding a lot of weight in dirt that won't be used. You could cut a piece of plywood to the shape of the tank, paint it with something like this:

Put supports under it, like cinder blocks that won't corrode, and then seal the edges with any combination of silicone, this epoxy, expansion foam, etc... Then make your pvc fill tube, run some wicks to the bottom through a few holes you precut and painted and back fill with dirt. It'd be half the weight empty. You could let it drain if you needed to move it, either through use, a siphon through your over flow, or you can install a spigot near the bottom. Good luck.

Not the answer you're looking for? Browse other questions tagged vegetables watering soil raised-beds or ask your own question.

3
Is the moisture sensor reading correct in my self-watering vase?
5
How to prevent fungus on soil in self watering pots?
6
First time gardener using a small raised planter - how to plant seeds?
4
How long does galvanised steel last, directly against soil, in a raised garden bed?
6
Self watering pot with no hole
2
Drip watering system drains water tank with inactive pump
4
Why isn't my self-watering planter wick carrying water all the way up beyond the dirt line?
1
What type of soil should I use for a galvanized steel planter for growing veggies?