Shall I remove pea-sized rocks and gravels from soil before planting a flowering cherry?

I plan to plant a flowering cherry (upright form) in the edge of my garden, but there are quite a lot pea-sized rocks and gravels in the soil (as shown in the pics). I wonder if I need to clean all of them before planting a young cherry?

As there was a well grow Jasminum nudiflorum in there , I wonder can flowering cherry grow in this kind of soil?

Thanks a lot for all answers! 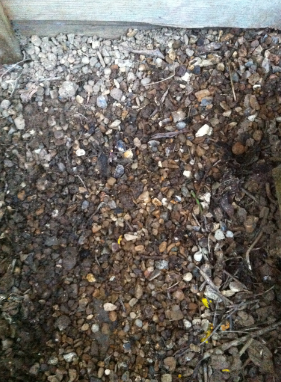 There is a layer between surface and subsurface around the hole for planting tree. Should I remove it? 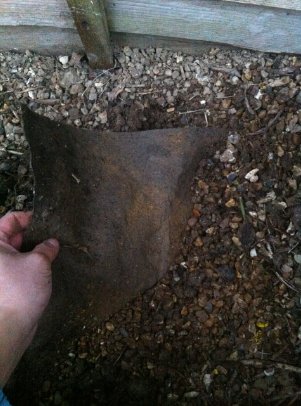 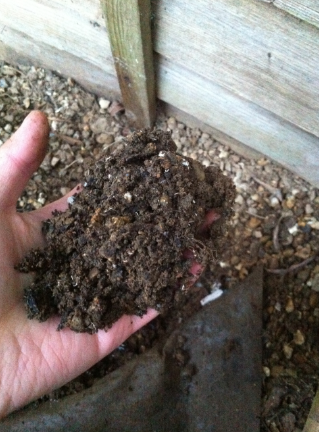 The plot and the previous Jasminum nudiflorum's root. 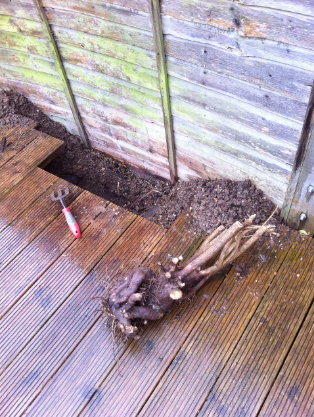 Couple of things - first, the corner of the material you've found is likely the edge of a geotextile membrane which extends beneath the deck to prevent anything from growing through, and to discourage rodents from making it their home (which they do quite like to do beneath decking).

Second, the pebbles were presumably on top of the membrane in the open part, at the base of the previous climber, simply to cover any exposed membrane, to make the cut out part look attractive, decrease the risk of any exposed soil from drying out and to discourage weeds, which should mean you can scoop most of them off the top layer.

Lastly, and here I bear bad news, I would not recommend you plant any kind of tree in that small space - its way too close to the fence for a plant of that type. Even Prunus amanogawa, the most upright and least spreading form of cherry, becomes two to four foot in width at the trunk over the years, and clearly, there is not enough room for it to develop properly. Cherries are also notorious for extensive surface rooting - even if that takes place beneath the membrane, it still means the membrane may heave upwards, and since it looks to be laid immediately beneath the deck, possibly in contact with it, that means you run the risk of the larger roots disrupting the deck itself. It may also push back the fence as it gets wider. A climber is probably about the only thing you can risk planting in that gap, though there are more interesting ones than Jasmine nudiflorum, which, technically, isn't even a climber unless tied onto a support.

If you're going to remove the decking and lay paving slabs, leave a gap of 2 feet between fence and slabs, plant the tree near the slabs, leaving at least 18 inches between it and the fence behind. Add a clematis, a late flowering jackmanii type, one that needs cutting down by mid February every year - then you get the blossom on the tree early in the year, and the clematis climbing up (with a bit of help from you) and flowering from end of June onwards. Flagpole cherry is attractive, but not when its just got leaves on, its pretty boring when not in flower, and that's what you'll be looking at 25 weeks of the year, plus around 22 weeks of bare stems. There is still the risk of its roots, in ten years, heaving up the paving though. As a point of interest, I once moved one I'd planted - it'd been in 18 months, and to my astonishment, it had one root going down into the soil, and 3 roots running under the surface of the soil horizontally, all three of which were over 6 feet long. I moved it successfully, but it just makes the point how quickly those surface roots spread out.

As for pruning out branches which touch the fence behind, waste of time, its the trunk that thickens up, and all branches should point vertically upwards. If they can't, they'll bend forward, and your tree will be fixed in that position, leaning forward away from the fence behind it.

To answer your other query regarding the 15cm gap between deck and membrane, yes, that gap means there's hardly any risk of disrupting the decking. If it were possible to enlarge the current planting gap in the decking to make it 2 feet in width from the fence, that might work.

Not the answer you're looking for? Browse other questions tagged soil rocks gravel or ask your own question.

12
What should I do if the soil shrinks and separates from the flowerpot walls?
7
How to prepare a soil that is compacted and has a lot of rocks
4
How much soil to remove from root ball when repotting?
5
Laying new topsoil, what if anything to mix in for worms or to kickstart healthy ecosystem?
2
Is having moss in your terrarium similiar to a layer of activated charcoal?
1
Ideas for removing stones and from soil
2
How can I remove the oil from my soil and grow new grass