What is this cactus with paper-looking spindles sticking out all around?

A small clone of it is growing on the top of the plant. Should I cut it and repot it, or can I leave it in there? 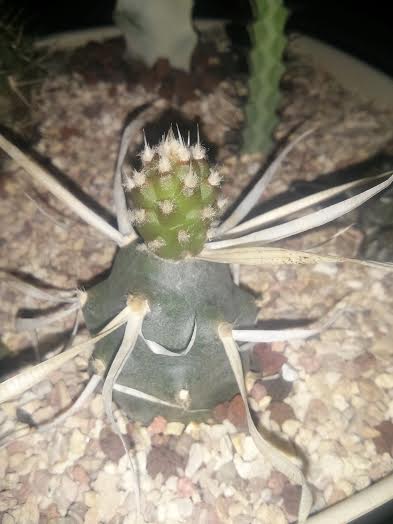 I agree that this intriguing plant appears to be a Tephrocactus Articulatus, var. Papyracanthus, commonly known as the Paper Spine Cactus.

It's a small genus in the subfamily Opuntioideae. It's name was derived from the Greek word for ashes, "tephra," referring to the color of the spines. Some species in this genus are very popular in cultivation, and are grown for their alien-looking stems and dramatic spines.

It's native to Argentina, but is a common houseplant in many countries. It also thrives outside where the average minimum temperature is approximately 50 degrees F, although some are hardy enough to withstand an occasional frost. The USDA recommended zones are 8b-10. Whether inside or out, it needs a lot of sun, as lack of light causes those spindles to become thin and weak. It needs good drainage, and, once established, requires very little water. A small amount once a week is good, but wait a bit longer if the roots are still wet. Source-Desert Tropicals.

That clone you're seeing is an immature segment called a "cone." The cactus grows by producing clumps or stacks of those. The plant can grow as tall as a foot high, though the cones are delicate and break off easily, so you won't often see one that tall. The easiest way to propagate a new Tephro is by gently breaking off a cone and sticking it into the ground, so you can leave the one you have and wait for some more, or you can use it to start a new plant any time.

As for flowers, a mature plant will produce flowers, which

are white in most species or pinkish, sometimes yellow, and in one case red. Flowers are less common in cultivation as the segments often detach with the slightest touch, and plants that are only a couple segments high tend not to flower. As such, a flowering Tephrocactus is a special delight to the hobbyist! source

I hope this helps you!

I asked somewhere else and I found out that this plant is called Paper spine cactus, the top part is going to be one of many extensions of the plant and it will end up looking like this:

Not the answer you're looking for? Browse other questions tagged identification plant-recommendations cactus or ask your own question.