How should I grow Moneymaker tomato plants in indoor containers?

A few questions about these moneymaker tomato plants:

1) Is it okay to grow two in a 5-gallon container?

2) Is a homemade bamboo obelisk like the one I am using (see picture) tall enough (it's 120cm)? Should I go for something open at the top?

3) I am keeping them inside in a partly shady spot. I was going to keep them indoors until May, when the frost risk will be gone and they can go in my unheated greenhouse. The temperature of my flat (even with heating on) goes from 12°C to 16°C. Do you see any possible problems with this environment (lack of sunlight, cold, etc.)? 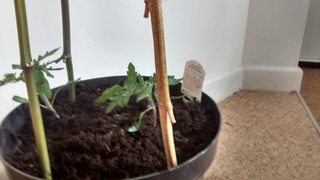 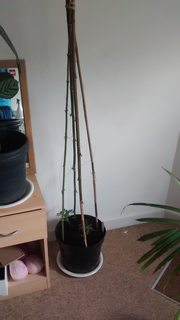 Two in a 5 gallon pot is going to be pretty cramped. If they are going to live in the pot their whole lives they will choke each other and you'll potentially get less production than you would from a single plant.

Your bamboo setup could be more open at the top but what you have should work, when the plant gets to the top it'll train outside the sticks and then you can pinch it off to encourage lateral growth.

The temp isn't optimal but will be fine, your plants won't be bothered by that. You do need more light on them though, for a cheap setup consider buying a can light (aka, spring light or mobile spot light http://www.homedepot.com/p/HDX-300-Watt-Incandescent-Brooder-Clamp-Light-HD-303PDQ/204684496 )from a home improvement store and using either plant bulb or a "daylight" bulb. I'd normally recommend an led because they are more power efficient but since your plant could likely use a little extra heat it wouldn't be bad to go with something less fancy that will produce heat. Look for something that says 5000k or 6200k color spectrum on the package. Set the light(s) on a 16 hour timer about 3-4 inches from the top of the plant and keep moving them up as the plant(s) grow.

Your plants likely won't die in their current situation but they aren't set up to really thrive, either. If you separate them out to two containers and give each of them supplemental light you'll have much better luck. Consider also putting a small box fan to blow across the plants for at least a few hours a day. This will prevent them from becoming too 'leggy' and promote healthier stronger plants.