Have I planted my tomato seedlings too close together?

I have been following this walk-through on growing tomatoes from seeds: http://www.reneesgarden.com/articles/grow-tomato.htm

I have planted my seeds in the rectangular container. But I believe I have possibly over-seeded them. See the picture below on current progress.

On that link showing how to grow them, steps 7 and 8 show that you prick out the seedlings and transplant them into individual containers. My fear with my current status is that the plants are too many and too close together, and I won't be able to untangle the roots when moving them from the large container (which they are in now) to individual containers.

Any thoughts on if this is currently still ok?

(not sure if it matters, but the front half are roma tomatoes and the back half are beef steak tomatoes) 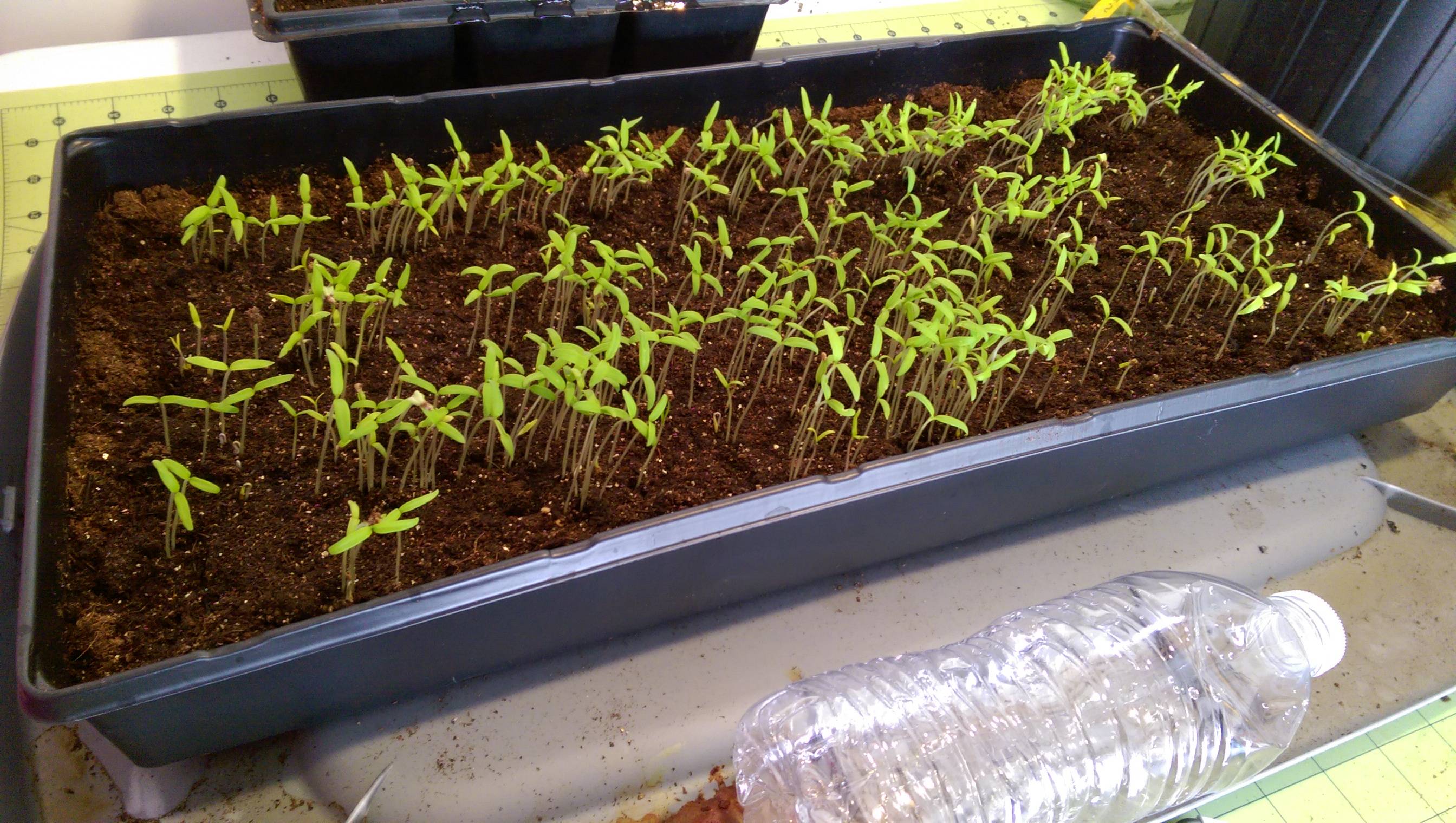 Yes, those are very close. You can still use most of them. First, get their new (cell pots?) containers ready and make sure you have moist mix ready. Moisten it beforehand, rather than after planting, especially if it's bone dry.

To remove the seedlings from their flat:

In the case that you don't need to grow that many seedlings to maturity, you won't have to repot them all. The easiest time to decide which to keep will be right after the clumps are split apart. Save the ones with the thickest stems, and the most soil on their roots. Or you can grow them all, and plant the best ones when they're ready, and give away the rest.

Also, ones that come out with almost no roots may not make it, or they may grow too slowly for good production. Losing a few isn't unusual in cases like this.

No those aren't too many. Not nearly too many. I think your plants may not be getting enough light however.

Craigh Lehoullier who is known online as nctomatoman has grown and sold heirloom tomatoes for decades using a dense planting method. He is also the author of the book "Epic Tomatoes: How to Select and Grow the Best Varieties of All Time" and was the person who gave the tomato "Cherokee Purple" its name.

He plants up to 2,000 tomato seeds in a 50 cell tray. Check out his dense planting video. They stay densely planted like that in the plug trays for a month before he transplants them.

He has dozens of seeds in each cell which he then breaks apart for transplanting into individual pots.

While the other answers are probably sufficient, I want to add my two cents.

Here's what I would do:

Tomatoes, when they're stronger than small seedlings, tend to be fairly tolerant of disturbed roots compared to other plants I've tried, with the possible exception of tomatillos with similarly thicker stems. I mean, you can just pull them like weeds and repot them and they'll be fine. I've done it lots of times. You don't even have to worry about disturbing or breaking the roots. As long as there are still roots on them, they should be fine. They regrow their roots quite quickly. If there are no roots, you can treat them like cuttings, which is somewhat more difficult, but it can work.

However, I must warn you to keep them out of bright sunlight for a day or two after the transplant, because plants with disturbed roots don't do well in bright sunlight. Bright artificial light may also be a problem. This is a bigger problem for cuttings rooted in soil, however, than for tomatoes with any roots at all. (Tomato cuttings rooted in water are probably more light tolerant than those rooted in soil, initially, but I recommend soil.)

Also, if you have damping off problems, when splitting them up you may want to keep as many roots on your tomatoes as possible, since pythium and such probably make breaking the roots a little riskier (but not anywhere as risky as planting a cutting rooted in water into soil with pythium in it would be: there's almost a 100% failure rate there, although maybe bright light would help; not sure about cuttings rooted in soil, because I got soil without pythium in it before I started doing that instead much).

One thing you can do to make this process more gentle on the plants is to soak them in water for a day or two after splitting them up, so they'll grow their roots out a little and heal a bit. This seems more important for peppers than tomatoes. It doesn't seem particularly important for tomatoes, but you can do it. It may increase initial light tolerance, though, but I haven't tested that in particular a lot.

While I said to wait until the stems are thicker, you can be successful beforehand. The plants are more tender, then, however, and it's a more delicate process to do without damage to the seedlings. They're also more susceptible to stuff. You'll also want to be a lot more careful with the roots at this point.

Not the answer you're looking for? Browse other questions tagged tomatoes seedlings optimal-conditions or ask your own question.

6
What fluorescent bulb is best for my tomato seedlings?
2
What should I do with hot pepper seedlings which are less than an inch apart?