When and how do I trim these bushes?

We moved in to a house with bushes trimmed neatly, but well over the sidewalk.

Do I trim this back all at once, or over a long period of time (months? Years?)?

We are in southeast Michigan, and will have several frosts before spring really hits. When do I prune these?

The branching inside appears to be fairly well filled in with thin branches. I'm guessing a hedge trimmer will be fine, cutting everything back. If not, how should I prune them? 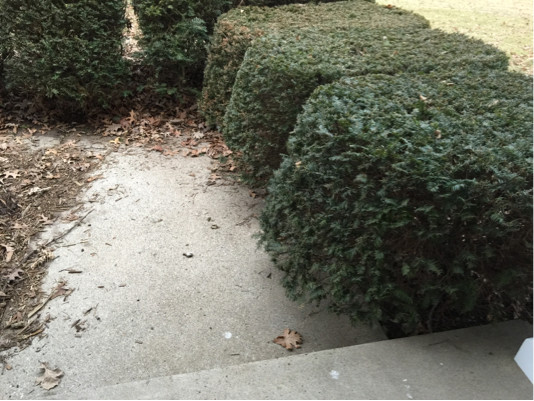 May help identify this bush: 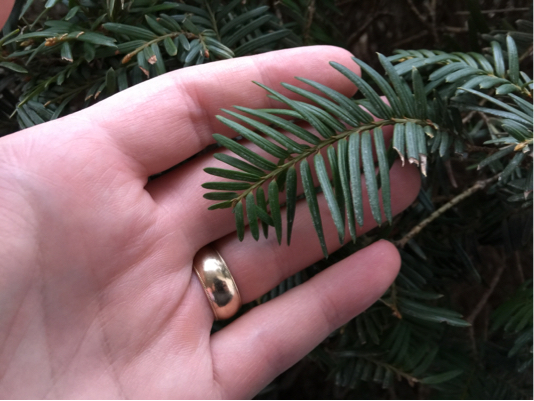 Interior of bush showing branching and how far over the sidewalk it has grown: 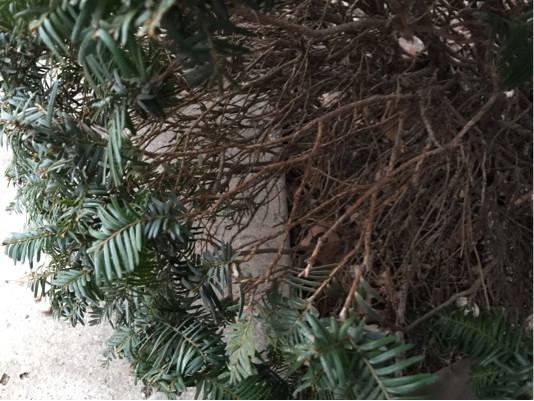 Those are Taxus, or yew. Which means you're in luck! That's because Taxus are one of the few conifers that can regrow from adventitious buds on old wood.

This means that you can cut them back hard (which destroyed most conifers), and they will grow out again. Take it back as far as you need, but go back to a live branchlet where possible, so not leaving a bare stub.

It will look rough for the first couple years, but you can start reshaping even after one season's regrowth, so the second year won't look too dreadful.

While you're at it, you could clear out the twiggy dead stuff in the center. That'll let in even more light, which will help the new growth sprout out.

If you wish, you can do this over 2-3 years, taking back a few stems each time. This looks a little ragged during the process, but it lets in light and starts the adventitious buds growing, so that when the bush is finally cut back, there will already be green growth in there. Or you can do it all in one year.

Note that those are well-shaped, in that they are wider are the bottom and narrower at the top. People often make the mistake of trying to make them vertical, which leads to the bottom dying away since it gets very little light.

Depending on your level of urgency, rather than moving them (which is fine if you feel urgent, and lots of labor), I'd go with cutting them back firmly, but not too terribly hard, year after year as tending to look better than just whacking them all the way back in one go, but not involving a lot of hard labor. Leave some green, but not a lot, and maintain the correct shape. As you open up the dead(-looking) brown parts they will sprout new green growth, and you'll be able to cut back a bit more the next year. Most of the brown parts are alive, supporting the green at the outer edge, but not green themselves as they are shaded out by the outer greenery - as they get more light, they green up.

I butchered the heck out of one, once. It did come back. It took quite a while. Its neighbors I did not hit quite so hard, and they looked a lot better, a lot faster, heading for the same shape from the same overgrown condition.

Those are Yew. If you cut them back drastically, it will take a long time before new foliage fills in the voids.

Based on their size, I'd say they were planted way too close to the sidewalk. If you feel up to it, I personally would move them back 1 or 2 ft. Otherwise I think you will want to trim them back a little at a time over the next few years.

Not the answer you're looking for? Browse other questions tagged identification pruning shrubs evergreens conifers or ask your own question.

8
Can I trim this shrub into a spiral shape?
5
When is the best time to trim cedar hedges?
4
Are these bushes sun damaged?
6
How should I treat a weigela bush with a large section of dead branches?
3
How and when should I trim this bush?
3
How and when should hydrangea be trimmed?
3
How to tame a Pyracantha?
3
Trim evergreen hedge or not?
4
Why are some of these Yew bushes dying?
3
Are these "wild" blackberry bushes?