I'm planning to tap a maple tree in my yard this year and have hand carved a spile from a small piece of cherry I had in the garage. Most online materials I've found recommend drilling a hole 5/16" - 7/16" depending on the spile size. In this case the spile diameter is around 1/2" and I'd rather not thin it down any more.

My question is, will the 1/2" diameter hole significantly increase the risk of injury to the tree or is this still within the realm of what would be considered a reasonable size that a healthy tree can sustain?

Extensive research into spile-hole damage (with an eye to reducing it, and preserving productivity) is precisely what has driven the downsizing of spiles. Few producers (essentially no serious ones) use even the 7/16 size currently. The area of damaged wood (which cannot produce sap in the future, until the tree has overgrown it with adequate thickness of new wood to support a new spile hole) is significantly less with a smaller hole, and the amount of sap collected is substantially the same regardless of hole size.

In this particular study, comparing 5/16 and 7/16 spiles, the 5/16 spile had only 59% of the damaged area as the 7/16 spile (for gravity - i.e. bucket or bag collection, as opposed to under vacuum where it was generally less, but not as much less.)

More recent research also indicates that using a new (washing, boiling, alcohol or even autoclaving do not suffice - new) spile each year increases sap yields, as there is some type of EXTREMELY persistent biofilm that resist all the mentioned treatments and lead to the tree blocking off the hole early. As such, purchasing a 10-pack of modern small spiles and using, then discarding, one each year for 10 years would be both kinder to your tree and more productive for your sap collection than using your hand-carved spile.

Also, don't overdrill the depth, for the same reason:

This image from northernwoodlands.org shows a board with a visible taphole and several visible stains (the tapered dark areas.) You can see that a good deal of new white wood has grown over the two stains to the left of the hole as the tree continued to grow. Even the stain with the hole has been grown over, but it was some years (and tree-growth rings) later than the other two. As a general guide, you never want to tap directly above or below a visible old tap hole. 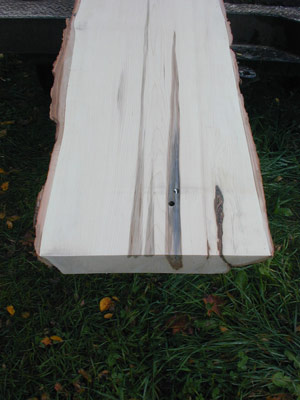 Not the answer you're looking for? Browse other questions tagged harvesting maple sap or ask your own question.