What are the best vegetables to grow in containers?

I'm trying to grow some vegetables in the second floor balcony of my house. I am from Sri Lanka. It gets about 5 to 4 hours (some days a bit less) of direct sunlight.

What are the best vegetables to grow in a place like this in containers?

Here are a couple of photos of the balcony: 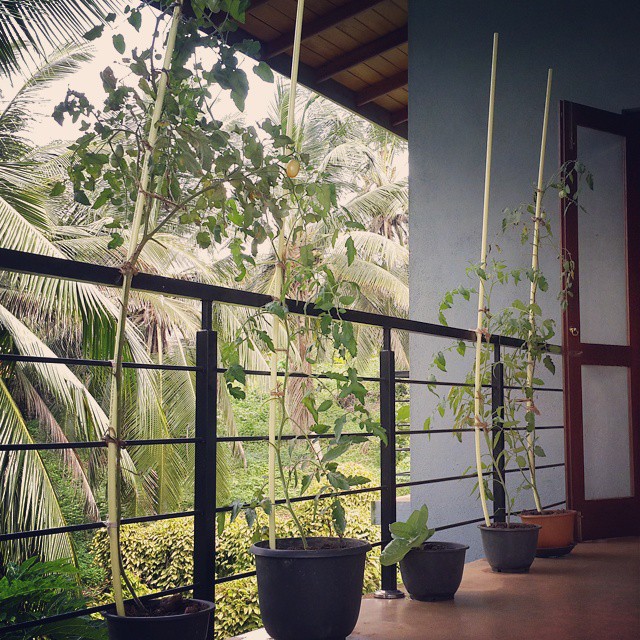 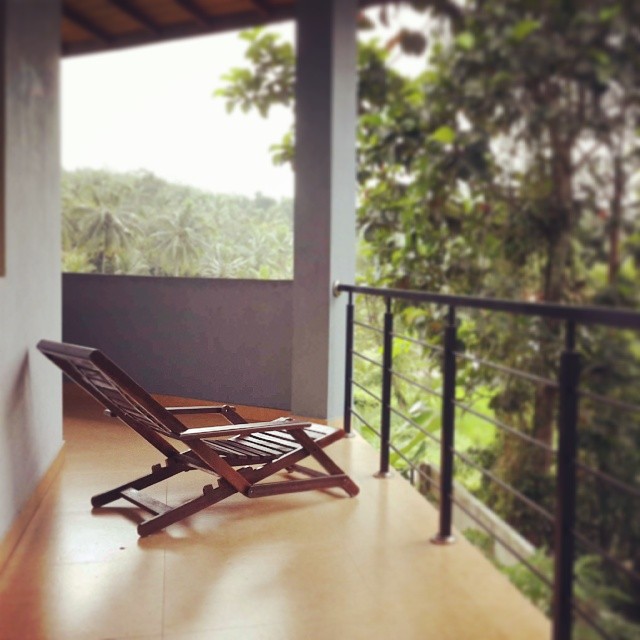 EDIT: Sorry about this, everyone, but a lot of the stuff I said about Kiwano from my personal experience may in fact be wrong, because my Kiwano plants appear to be growing cucumbers. I messaged the person who traded them to me. So, hopefully we'll get this sorted out and find out if it's just a weird Kiwano plant, a rare hybrid, or a full-fledged cucumber. In the meantime, I have verified that cucumber flowers taste like cucumbers, and the leaves are bitter. This may not be true of Kiwano. Kiwano really is supposed to climb, though (I've seen pictures).

If you're looking to grow food you can eat quickly, you might consider planting some squash, but not just for the fruit. You can eat the leaves, shoots, stems and flowers of most squash, as well as at least some other cucurbits. For instance, Kiwano flowers. Kiwano flowers taste great. They taste like cucumbers. I was glad to find they have much flavor. I think you can cook up Kiwano leaves like spinach (I've heard some people do that in Africa, I think), but having eaten a leaf I grew raw, they may not taste that good raw, and may even be toxic, as they're kind of interestingly bitter. Maybe they have a special way to cook the bitterness out. Some people find raw Kiwano leaves spiny, such as to give splinters, but mine aren't like that at this point.

Kiwano and cucumbers might be great to grow. If you try some squash leaves/stems/shoots or such and they're bitter, don't eat them, though, as that indicates high levels of cucurbitacins, which are toxic. When the leaves get too old they can be fibrous and difficult to chew up all the way, like large broccoli stems. So, harvest them before they get too old.

I get leaves on my squash fine in 20 fl oz cups as containers. So, I imagine you'd get more and bigger ones in one of your containers. As for fruit, I'm not sure how much soil is ideal.

Chilacayote is a great squash with edible leaves, stems, shoots and such. Just don't eat the seed leaves (they're bitter). The raw regular leaves taste like a mix between spinach and raw green beans. It's said to climb trees and stuff, so you may be able to let it climb a trellis pretty easily. (I'm pretty sure Kiwano climbs more, though.) I'm not sure how much soil you need, but if you're just going for leaves, it shouldn't matter too much.

One important thing to realize about container gardening is that people tend to prefer bushy plants for it. You can get bushy or shorter varieties. If you want cantaloupe, I hear Minnesota Midget works great in containers. It's not so much the species of plant you should look at as the variety. There are container-worthy varieties of many kinds of plants.

For tomatoes, most people who grow them in containers tend to get determinate, bushy varieties. However, indeterminate varieties can work if you do things right. I see you have tomatoes already. They look indeterminate. If you want them to be bushier, I recommend cutting the top off each plant. They should grow new branches faster that way. Pruning indeterminate tomatoes can be a great thing for container gardening. If you cut the top off your tomatoes, you may want to give them somewhat less water until they grow new shoots. You can root the prunings for more plants if you like.

Speaking of pruning, it can be good to prune Kiwano and cucumbers, too, if they're vining plants. It could possibly be good for squash and melons, generally, too, but I haven't tried it on them, except Kiwano, so far. I have tried it on cucumbers, and it works (you can root the cuttings you prune off, too, of both cucumbers and Kiwano). Cutting the end off my foot or two long Kiwano plant certainly made it branch out. It also made it flower sooner. The plant will probably grow more flowers faster if you remove flowers, too. This can be useful if you eat the flowers. It can be a nice way to get female flowers faster (if you're only getting male ones).

If you want to start cucurbits in-doors before putting them on the balcony, I recommend putting a fluorescent light a few inches from the leaves. They tend to grow large, fast then.

I would recommend peppers if you're already in the habit of growing tomatoes. Peppers are naturally bushier than tomatoes, and they can fruit well in containers, on probably less soil than tomatoes. You might consider a productive variety. There are loads of extremely productive peppers (such as Aji Limon, AKA Lemon Drop Pepper, Yellow Monster, and many others). Pepper plants can be tall or short. Some peppers tend to get huge, but many are much smaller and still productive. I've heard that some pepper varieties have edible leaves (but not all). Let me know if you find out which ones.

You might consider Ethiopian eggplant. They are ornamental, grow nice fruit, and you can eat the leaves. It's a different species than regular eggplant (I don't know if you can eat the leaves of regular eggplant). Melanzane Rosso Di Rotonda, Burkina Faso, Ruffled Red, and Turkish Orange are some varieties of Ethiopian eggplant. You can find most of them listed amongst the eggplant varieties at rareseeds.com.

Food you like to eat. I would never grow peppers - I never eat peppers, I don't like peppers, QED. Many other people like, grow, and eat peppers.

Food that's better grown at home. I would not grow sweet corn in a container - it's not a good container choice size-wise, and it's easily and cheaply available from local (and more costly non-local out of season) sources. I rarely bother with giving it garden space, for that matter. If I were more of a sweet corn snob I'd be more interested in giving it garden space so I could boil the water, grab it from the garden and get it in the water (or over steam, actually at my house) in seconds - but I'm not that much of a sweet corn snob and I got tired of fighting the various other things that help themselves to it in my garden, when I can buy it inexpensively and locally grown in season.

The locale will naturally change what's locally and cheaply available that is not too degraded by transport to and from market. I grow in containers and in my garden tomatoes, basil, and "pineapple" tomatillos. I like particular varieties that are not commonly or cheaply available here, so they make sense to grow. Without the much greater space of the garden, the ones in containers (only) still would not be much of a contribution to the overall food supply. That is one serious limitation to "a few containers on a balcony" IMHO.

I grow garlic in my garden, but have never considered it for containers, as they probably would not appreciate containers much, since being in the ground here mitigates the freezing. You'd probably have to refrigerate garlic for several months to convince it that winter had happened so it would sprout, in Sri Lanka; or there may be some variant with a low-chilling requirement, I don't know.

Various herbs can work well in containers - again, has to be ones you like, which are better fresh to make much sense. Tarragon might be one, though mine is all in the garden and I make do with dried, frozen or pickled in the off-season.

Not the answer you're looking for? Browse other questions tagged vegetables container-gardening or ask your own question.

4
When planting is it good to use one pot for each plant or one large common pot?
2
What is the effect of intense sunshine on vegetable plants?
6
Pot size - small & repot, or start large?
4
Starting Coccinia grandis from ripe fruit
0
A tale of two "pinch backs" (should some plants not be pinched back?)
1
Growing vegetables indoors under grow lights - How much space for 1 person to survive or at least have significant yield?
2
Chrysanthemum blooms partially deformed and colors faded
1
Marguerite daisy leaves are turning yellow and drying
3
Are there some vegetables that grow in full shade?
4
Deformed new leaves on my bilberry (european blueberry) plants