What kind of mulch should I avoid for vegetable garden paths?

I checked out this question about what kind of mulch to use around plants. But this year I want to make some extra fancy victory-garden style paths around the places I'd probably just trample anyway in my vegetable garden.

So, I'm wondering what to avoid. For instance given my local landscape supplier's stock what should I not go with (I can already guess chopped up tires is probably not a good one).

If you really want the Victorian look use stone dust with fines. This is crushed limestone gravel with the dust and is usually inexpensive.

See below for the informal look at Gravetye Manor 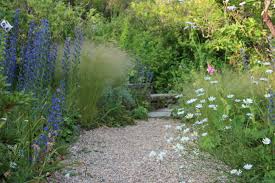 Or the slightly more formal look with some flagstone 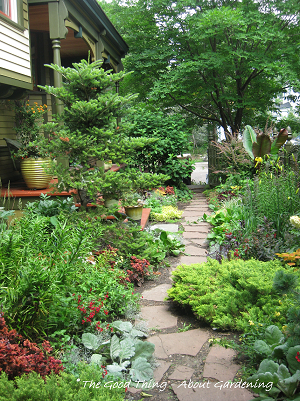 I avoid mulches that are dyed - the reds and super blacks are common ones. There may be no reason to do so, but I don't know what those dyes are made with. (See J. Musser's comment below for info on dyes)

However what we typically use for garden paths (when not using gravel or pine straw) is wood chips. Wood chips, though a bit more coarse than most mulch, tends to support foot and vehicle traffic better than shredded mulch. The larger pieces also mean that it lasts longer (unless the mulch has some preservative, though I don't know that any mulches use such things) and drains better than shredded mulches.

Often we don't even have to pay for them or delivery. We call around to tree-removal guys and ask if they want to drop off some chips. They're happy to deliver to our job site, and to deliver them for free, because otherwise they'd have to pay for disposal. But we will take a full truck-load, and you might not need that much. So they might not want to deliver a partial load. Worth asking, though.

If that doesn't work, our plan B is to go to the local landfill where the same guys have paid to drop off the chips. Around here (eastern Long Island, NY) most landfills will either let you take what you want for free or charge a fraction of what you'd pay from a supplier. In my home town they'll even load your truck for a nominal fee.

Just a couple things to consider from an ecological aspect. If your garden plants prefer acid soil like roses, rhododendrons etc, swap the limestone dust for decomposed granite ( DG). Lime will bind up phosphates especially in shallow soil. thus it may be counter productive. DG is much more inert yet still compacts to an excellent walking surface.

If wood chips are preferred, be sure to use chips from species like douglas fir that have a low nitrogen/carbon ratio. This will ensure the chips last much longer and perform better as mulch. Using chips from richer species like alders will break down faster and promote weed growth.

While it is true wood chips will bind/rob nutrients, when they are placed on the ground surface the effect is nebulous. Wood chips will also hold soil moisture to the benefit of roots lying beneath.

Not the answer you're looking for? Browse other questions tagged vegetables mulch or ask your own question.

37
What's the best mulch material for a vegetable garden?
7
What are the pros and cons of bagged mulch versus city mulch?