Why are the leaves of my ginger plant drying out?

It's only been 3-4 months since I potted my ginger plants. I water them every 2-3 days depending on the the weather. I try not to get the soil too moist.

Over the last couple weeks, the leaves of one of them have been drying out, though it still appears to be growing. 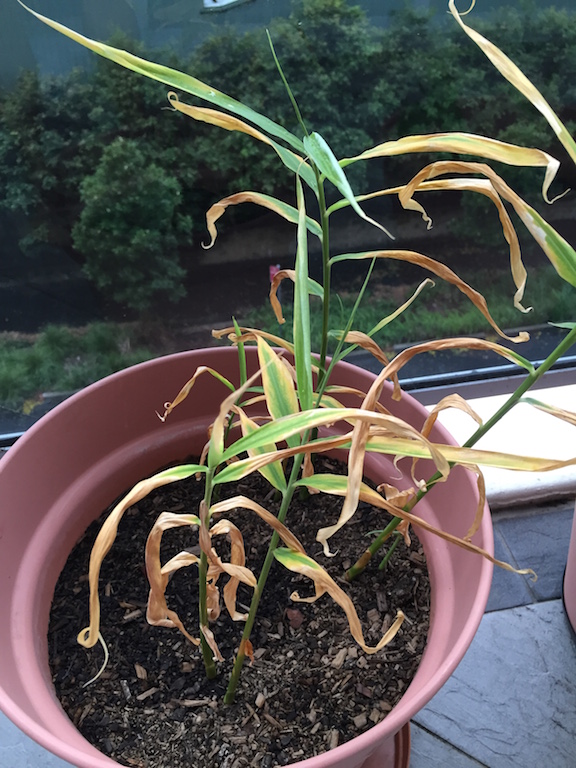 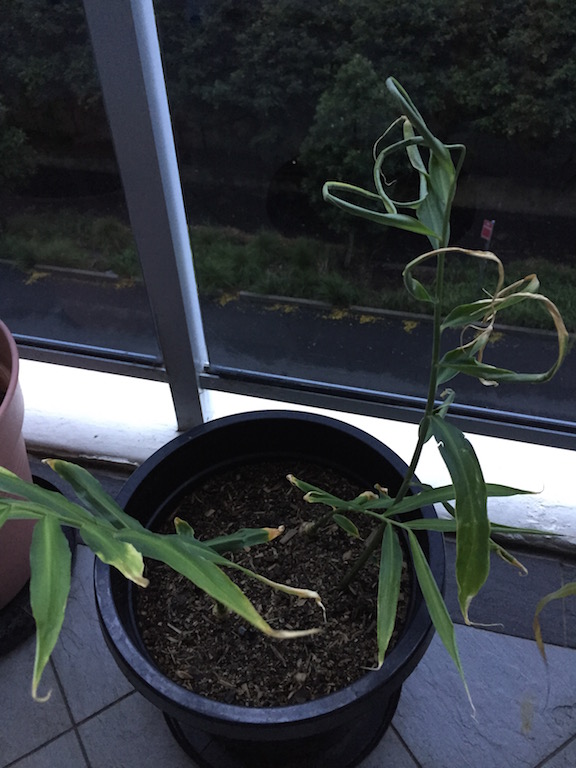 I grow three different "gingers" - white (Hedychium coronarium), kahili (Hedychium gardnerianum), and blue (Dichorisandra thyrsiflora) (though that one has yet to flower so I can't say for sure that it's what it claims to be, and it's "not really a ginger" anyway.)

You may be under-watering - it's somewhat hard to diagnose over the internet, but both looking crispy and your comment of trying not to get the soil too moist lean that way. I water mine until water comes out the bottom of the pot, and if it's hot I'll leave some in the saucer. My original white ginger (much expanded from a "soil-free inspected plant in a baggie at the airport in Hawaii", and split quite a few times) is now 25 years old, and has never had issues with root-rot or the like. I'd probably plunge yours in a bucket for 20 minutes, then pull it out, drain for a minute or two, and return it to a saucer. I'd say both of those look a little crispy, actually - just one is worse than the other.

Each stalk does also just die back as they age, and new shoots come up, but I don't see much in the way of new shoots on your plants. As an additional thing that's difficult to tell over the internet, I'm not much liking what I see of your potting soil; seems very bark-y. You may just need to await new shoots - see if there are any green/red spots on the rhizhomes thinking about putting up new shoots.

I asked about direct, full sunlight because some gingers do not like those conditions - yours look not unlike mine were when I tried growing them on my south facing balcony (full sun). They like sun, but prefer it to be dappled (as in shaded by the leaves of larger plants) - I could not provide these conditions and so I gave up with them. When they're actively growing, particularly when still quite small, they do want quite a lot of water, so its likely you are keeping them too dry. Plunge' them as suggested in the other answer, and afterwards, when you water, give them plenty, but just make sure you empty out the trays or outer pots they're standing in after 30 minutes, so they're not left sitting in water at the base.

the PH of your water must be slightly acid otherwise nutrients cannot be absorbed by the roots coupled by lack of water id say use a liquid fertilizer (not miracle grow) something with a nutrient content of 5-5-5. thats 5 nitrogen 5 phosphorus and 5 potassium all essential for proper ginger growth

The one with the curled in leaves, which is called pig tailing, has a copper deficiency. The other is dying from a rot, probably fusarium, no saving that one sorry.

Not the answer you're looking for? Browse other questions tagged leaves optimal-conditions ginger or ask your own question.