Is drainage needed for a new lawn on compacted clay?

I am in the process of creating a lawn at the back of my house. The previous owner had paved and stoned the area. The size is about 30ft by 40ft, it is raised from the level of the house by about 2ft, with steps leading up (see pic 1). It was 50/50 split of stone and paved.

I have removed the membrane and most of the stones from the stone area. I have lifted up all the patio flags and now there is about 4" of hardcore that was supporting the flags. I can also see from the level of my neighbour's garden area that the previous owner has dug down about 6-7ft to create this space (see pic 2).

What this means is there is no top soil. As the area has been dug out to 6-7ft the base is compacted clay. A few stones from the stone area are sitting on top of the clay and all hardcore remains from the flag area.

What is the next step after clearing this area? I was thinking I could just level out the stones and hardcore over the clay evenly. Get top soil for about 6" coverage and then sow seed. Is this enough or do I need to do anything extra regarding the clay? Do I need to consider some type of drainage? After some rainfall I can see a few areas of water that have not cleared after a day. These aren't large areas, just a few puddles. 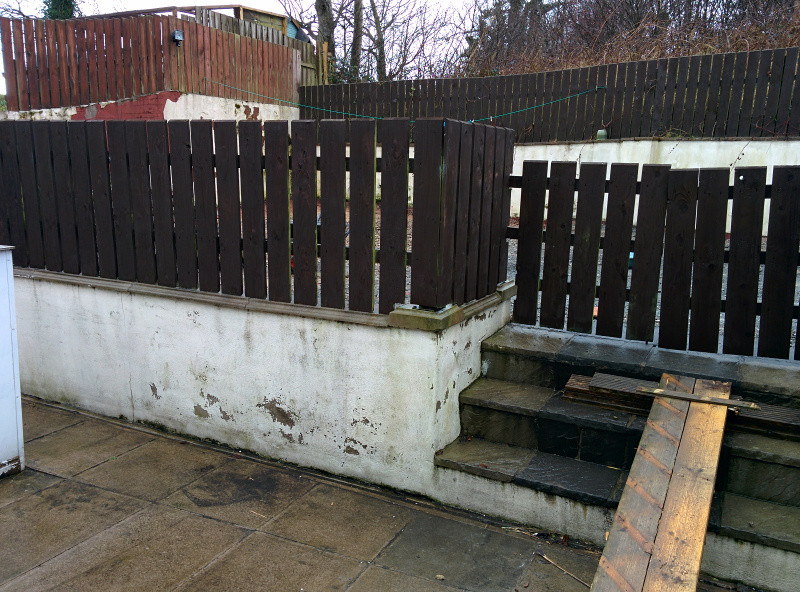 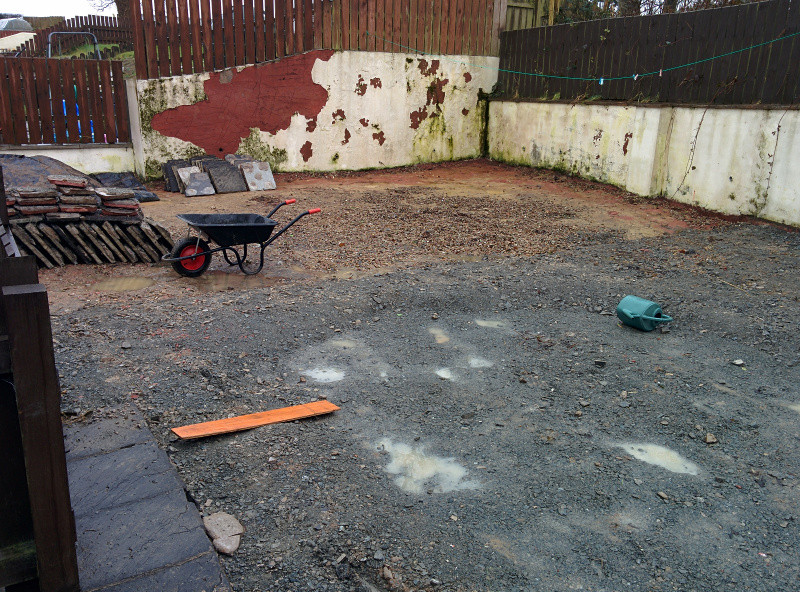 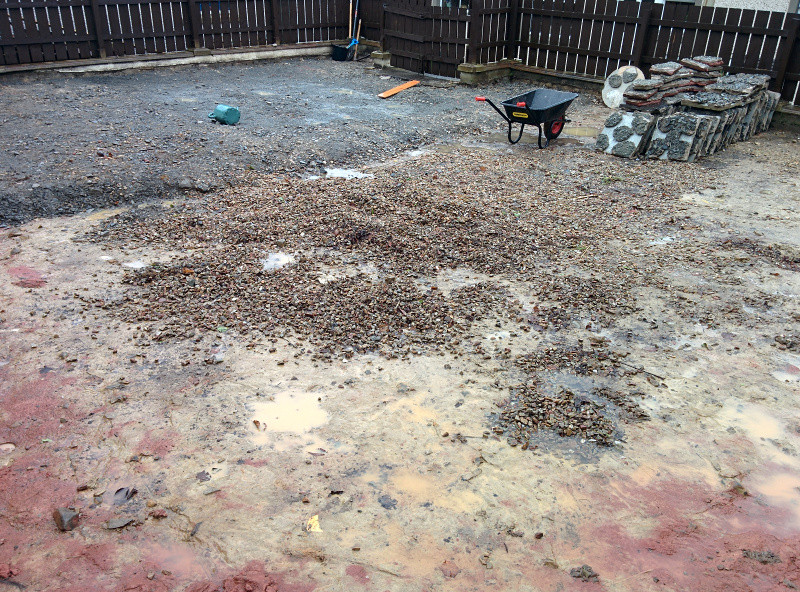 Any responses appreciated from novice gardener

I'd dearly love to know what part of the world you're in, because that looks remarkably like London clay, but then I guess clay looks the same most everywhere.

I'm sorry to say your plan won't work terribly well - unless you compact them, the layer of stones will move and you'll end up with a bumpy lawn which still doesn't drain well in very wet weather. If you compact the stones, then the drainage certainly won't be improved. I've enlarged the pic showing the retaining wall, and it doesn't appear to have any weepholes to allow for drainage from the upper area either, which it should have.

After a while of being paved, the soil beneath will have completely compacted, and that's what you're seeing. I recommend you remove all hardcore, and unless you're going to repave elsewhere, sell it or ditch it. Then hire a rotovator, or dig by hand with a fork (not a border fork but the larger one) and turn over the whole area of clay to break it up, incorporating plenty of washed sharp or horticultural grade grit, together with humus rich material (garden compost, composted animal manures, leaf mould, spent mushroom compost, anything you can easily get in quantity). Let it sit and settle for at least a couple of weeks, and then add topsoil if its necessary - sometimes, an ordinary clay topsoil can look like yours does simply because its completely compacted. The problem with adding 6-8 inches of topsoil is the levels, because the area already looks flush with the edging paving slabs; adding 6 inches on top means it'll wash over the wall, so you may need to raise the edging. The other disadvantage with importing topsoil (in the UK anyway, not sure about other countries) is finding decent topsoil - often it's motorway spoil, full of weed seeds and stones, and may be clay in itself, so top dollar needs to be spent on it I'm afraid.

Once you've done that, you then need to level the area - walk all over it on your heels to get out soft spots and hollows, rake over and relevel as many times as you need to till its level, then rake gently so as to leave a fine tilth on the top, then either sow seed or lay turf. And you might want to consider finding a way to drill weepholes into that wall...

One other thing - I'm seeing some algal growth or moss up those walls at the back - if the area doesn't get a lot of sun at any time of the year, then a lawn isn't the best option.

When grass or sod is laid directly on top of clay subsoil it cannot grow deep roots. It will tend to brown out during dry times.

One client I did work at had purchased a new home with sod laid directly on top of subsoil. A year after they had taken possession you could pick the sod up like a blanket. It had not rooted into the clay at all.

Lawn is not always the best outdoor surface. This area would be great if you graveled with 3/8 minus crushed gravel or crushed granite and used gorgeous pots (that are in some way related by color, shape) filled with sterilized potting soil, no rock or gravel at the bottom and plants. So very usable! Go with what you have...Easy to provide drainage above by drilling holes in your walls, perf pipe and trench below to assist with drainage. You can grow patio trees, shrubs, vegetables in pots. Even provide automatic watering systems, cheaply.

10
How can I drain water from a low spot in my garden when I have no lower spot to drain to?
9
How do I determine the proper way to drain a yard?

10
How should I fill and reseed shallow depressions in my lawn?
9
Clay filled lawn with bad drainage, needs solution
7
Can I add new soil on top of existing lawn without trouble?
4
Returning a garden paved for 30 years with packed clay below, back to lawn
4
Clay Yard Drainage Issues
6
French Drain Below or Above Retaining Wall?
4
Should i use rocks in a (VERY) large container for gardening? (no drainage)
5
What’s the ideal slope for draining a garden with clay soil?
2
What should a new lawn look like after one week?
1
Looking for irrigation solution for a big orchard with clay soil and salty spring water