How do I safely eradicate mold without hurting cactus seedlings?

Here are some of my seedlings, sown a little bit less than a month ago. As you can see, there's mold starting to form. I am using the baggie method whereby the pot with the seeds is enclosed in a Ziploc bag, to maintain high humidity and protect from contamination. What would be an easy way to get rid of the mold without hurting the seedlings? Someone suggested to use hydrogen peroxide, but I'm not sure it's safe for the seedlings. Ideas? 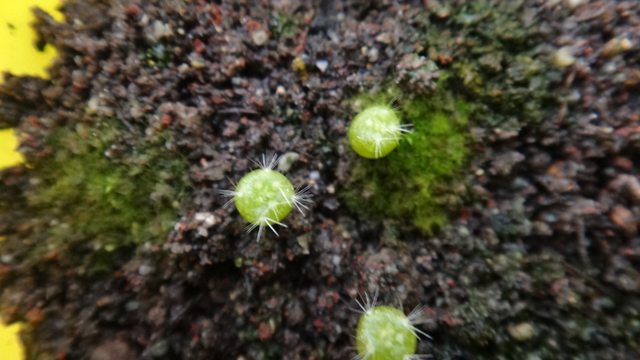 That isn't mold, it's moss/algae. You can tell (by the green) that it's growing from energy obtained by photosynthesis, so it's not a big threat competition-wise. It's a sign that the mix is constantly moist on the surface, and also grows faster in high humidity.

It will not damage the cactus seedlings, but here's a tip. When cacti germinate, they grow very slowly/remain the same size for a long time. That's because they're developing a strong root system. A sign they are established is that they will begin to grow at a faster rate. This means the root system is growing deep, and you can allow the top 1/2" of mix to dry between waterings. This will keep moss from establishing.

For now, you can use a toothpick and stir up the top layer if you want, to slow the moss, as described here:

Or you can use a pair of tweezers and carefully remove the moss. In the long run, it really doesn't matter. The moss won't be a problem after the seedlings mature a little, and you don't have to water so frequently.

And by the way, those seedlings look great! I hope you have success with them.

Not the answer you're looking for? Browse other questions tagged seedlings technique cactus succulents moss or ask your own question.

17
Is there anything wrong with allowing moss to grow around herbs?
4
Does moss sprout leaves?

7
How to prevent mold growth on moss ( kept in a closed jar )?
17
How do you water tiny seedlings?
5
How to fix a broken cactus
4
How to save this blue cactus?
4
How to keep seedlings fresh?
7
How can I determine if cactus seedlings are dead?
4
How long can an Opuntia (prickly pear cactus) live?
0
How can I tell how old my fairy castle cactus is?
3
When can potted Strawberry Seedlings be safely transplanted outside considering Squirrel attacks?