Saving basil plant after it has been sitting in trash?

So I foolishly tried to help my basil plant grow by composting in the pot it was growing in. Needless to say this made the plant sick and yellowish and the leaves that have turned yellow have a bad smell to them. I have since removed the plant from the pot and it is now sitting in a pot of water with the remaining non-contaminated soil around it's roots.

Other than letting it sit in the clean pot (which doesn't have very much soil in it and has quite a bit of water) for a week or so and then replanting it in clean soil, is there anything I can do to get the plant back to looking and smelling normal?

Here are pictures of the plant and some of the yellowed leaves that have fallen off (click to enlarge): 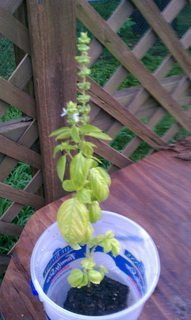 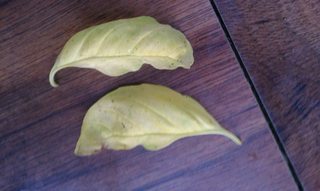 In case it isn't clear that leaves should be closer to the color of the grass in the background (as that is what color they were before).

First off, your basil has bolted, which means that it has sent out a long stalk with flowers on it and the plant is on its way to dying. This is part of the plant's life cycle and there's nothing you can really do about it. In future, remember that you can prolong a basil's life by pinching the flowers as soon as they appear. As to why this works, I gave an explanation in another answer

Remember that a plant's "mission" is to reproduce before it dies, to ensure the survival of its species (producing flowers is the first step). If you let the flowers stay till they drop off on their own, the plant, satisfied that it has successfully produced a flower, might decide to stop producing them (end of the flowering season).

However, when you remove the dead flowers you're sort of "tricking" the plant into thinking that its previous mission has failed (i.e., it hasn't produced a flower to ensure its survival).

"Tricking" the plant encourages it to produce more growth (and flowers too, which you should keep pinching/deheading).

Now coming to the yellowing part, that could be due to many reasons. The simplest explanation, given the advanced stage of bolting, is that the plant is in its last days. The other equally simple explanation is that you have over-watered the plant. Both these produce yellow leaves exactly like in your picture (the fact that the leaves are yellower closer to the base makes me think it is due to over-watering). Other not so simple explanations are fungal diseases or nutrient deficiencies, which are rather hard to diagnose for basil, because the reaction is the same (yellow leaves).

My suggestion would be to let this one run its course and be more careful with a new plant and don't let it bolt.

Not the answer you're looking for? Browse other questions tagged herbs basil repair or ask your own question.

74
What are the best conditions for basil?
20
Should I remove the dead flower heads from my hydrangea?
18
How long will my basil plants live inside?

6
What is this sweet smelling herb-like plant?
6
How can I tell the difference between etiolation and a sunburn?
5
How do I grow a basil plant tall?
12
Will my basil plant regrow without leaves?
6
Can annuals work like perennials if you keep using cuttings?
8
How should we treat cracks in the stem of Aloe Veras?
4
Basil stem turning brown after pruning
8
How to care for sweet basil plant in a humid climate, such as Hawaii?
1
Regrowing basil from bought plant
1
Which Basil leaves should I pick to minimise damage to the plant?