What is the proper way to prune a pear tree?

I have a pear tree which I planted about ten years ago. It has done relatively well. It produces fruit on a yearly basis (I don't know if I'd call them exactly edible, but it does produce). The tree at this time has started to reach skyward, which I understand is bad for producing fruit. My questions are:

How should you go about pruning the pear tree so as not to cause permanent damage?

Basically, you only want to cut limbs small enough to heal over in one season, if possible. This will vary by the age, rootstock, and overall vigor of your particular tree.

Pear trees show very strong apical dominance, and will naturally grow rather tall and narrow, not the best for fruiting. My favorite pruning method for a standard pear tree is a cross between central leader and open center, called a 'modified central leader'. 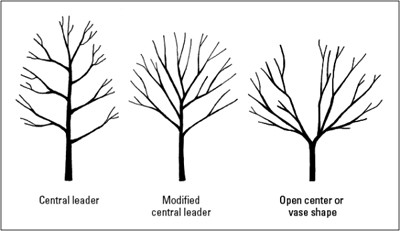 Basically, central leader has the benefit of being the strongest form, but gets quite tall, and doesn't let as much sun reach the center. Open center is great for some fruit trees, like peaches and apricots, because it lets in more sun, for better ripening, but is often not strong enough for a full crop of pears, as well as being hard to train pears into.

Modified central leader is a compromise. The first part of the tree is grown like a central leader (christmas tree type) tree, then the leader is trained out, and the center opened up into an open center style (to let in light, and maintain manageable height), higher up on the tree.

Don't use a pruning sealer/wound dressing. That can do more harm than good. Use a sharp, clean pruning saw for the large cuts (over 1" diameter). The easiest kind to use is a curved hand pruning saw that cuts on pull. You can use loppers for stuff smaller than 1" diameter, and for light stuff (around 1/4" and less), use sharp, tight, hand pruners. You don't want to leave ragged strings.

Try to prune it once a year, lightly, to keep it in shape. One thing to keep in mind is that pears bear fruit on spurs (which are described here). They are stubby, slow growth that forms on well matured wood. They require mature wood and slow growth to grow, and as pruning promotes new growth, be minimalistic once your tree is in shape. This pertains to pear trees. This is not true of others (like peaches and apricots).

What time of year should I prune it?

Prune in early spring, after it starts warming up, right before it begins growing. If you see buds swelling slightly, it would be a good time. If you wait until it starts growing, you will damage a lot of tender new growth. If you wait until summer, your view will be greatly obstructed by leaves/fruit.

Fall/winter pruning can work, but I avoid it, as it leaves the wound open and drying for a long time, increasing the chances of pathogens finding their way in.

Are there any drawbacks from pruning?

Yes, but they are greatly outweighed by the pros.

Not the answer you're looking for? Browse other questions tagged fruit-trees pruning tree-care technique pear or ask your own question.

9
Should I seal the wounds where limbs were removed on a crape myrtle?
11
What's a good method for pruning an apple tree?
12
What is a sucker and how does it differ from a water sprout or branch?
5
What is 'Apical Dominance'?

20
What is the proper way to prune a Fig Tree?
16
Encouraging fig or similar into canopy: what to do with site of severed limbs?
17
How should I prune this overgrown pear tree?
9
Grafting compatibility
5
Relocating an apple tree - when should this be done?
9
When is it ok to prune an overgrown apple tree?
11
How should I care for my multi-variety apple and pear trees?
6
Do Orange and Lemon Trees need annual pruning?
5
How to prune a young cherry tree that was left alone since being planted
3
Fire Damaged Bay Tree (Laurus nobilis) - What to do?