A couple of questions.

First: Is this Scale in the first photo? If so, what type? If not what is it?

Second: It appears that on some leaves (second photo) ants are turning the scale to mash potatoes. If this is the case then is this sufficient control for the scale or does it need more attention to keep the tree healthy? 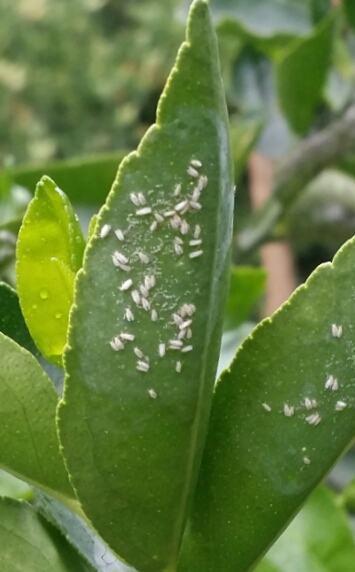 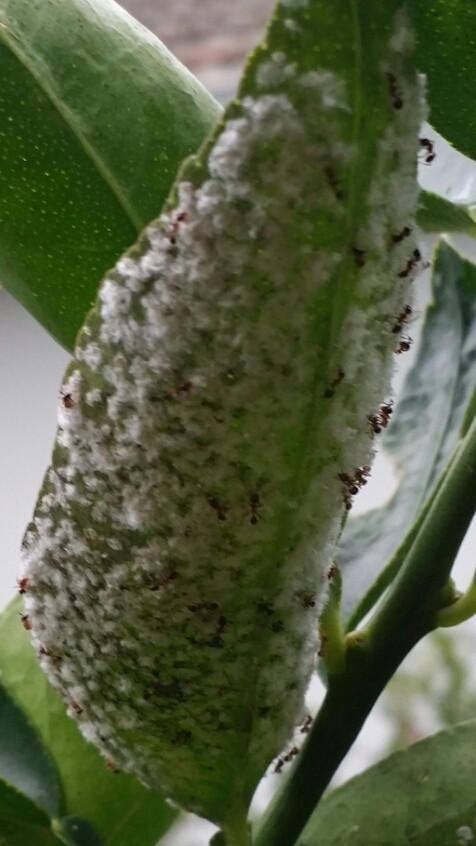 I believe that (in the first picture) is citrus whitefly (Dialeurodes citri). The small white dots are probably the eggs and larvae (the nymphs fasten to the leaf undersides like scale - see below). These insect suck plant juices, and so are considered pests. 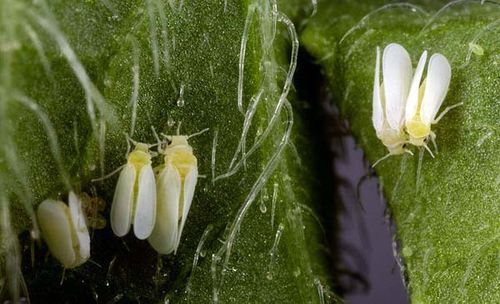 Here are some management guidelines, from here:

Biological control. Several parasites and predators attack the citrus whitefly. An introduced wasp parasite (Encarsia lahorensis Howard) is established in Florida's citrus regions and is reducing citrus whitefly populations. Delphastus pusillus (Lec.), a small dark brown ladybird beetle, feeds on the eggs but is never abundant. Delphastus catalinae (Horn), a California species, was introduced into Florida by University of Florida entomologists, and it also feeds on whitefly eggs. Cryptognatha flavescens Motsch., a coccinellid about 1/10 inch long and reddish brown, and another ladybird beetle, Verania cardoni Weise, were found by Woglum to feed on the citrus whitefly in India. Morrill and Back (1911) recorded two other ladybird beetles, Cycloneda sanguinea L. and Scymnus punctatus Melsh., that feed on the citrus whitefly in Florida, as well as a mirid bug, lacewings, mites, ants, and a species of thrips, Megalurothrips fasciapennis Franklin.

From the second pic, it looks like you've got wooly aphids. Same as shown in this video. The ants are there for the honeydew, which the aphids excrete. 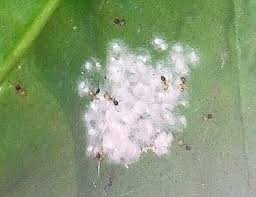 Here are some aphid management guidelines.

As this is a citrus plant, then likely it is citrus woolly whitefly (aleurothrixus floccosus). They could possibly be nymphs for a scale infection, with adult scales attached to the woody parts, so check those just in case, but it looks more like woolly whitefly.

The ants are neither here nor there - they're on the plant because its infested with aphids or scale. Both these pests produce honeydew, and the ants 'farm' them to collect it, so they certainly won't solve the infestation problem you've got, rather, they'll protect it. Treat for the infestation and the ants will leave - they will not harm the plant in themselves.

As for treatment, a parasitic wasp was released in Tanzania, Uganda, Kenya and Malawi (and here its obvious my geographic knowledge for your part of the world is pretty poor) so if you're in any of those countries, you shouldn't really use pesticides, although its fair to say the wasps were released to protect citrus crops rather than individual trees. You can try spraying with a pesticide fit for this purpose, see what's available where you are, but they're not usually that successful, requiring further treatments to keep the pest under control. Neem oil will have some effect, but you'd need to keep checking newer leaves and respraying as necessary. Increasing ant activity would also indicate a surge in numbers of the whitefly, so that's another clue to watch for.

Not the answer you're looking for? Browse other questions tagged diagnosis fruit-trees pest-control citrus or ask your own question.

11
Why did the stem suddenly weaken in my oriental poppy?
2
How can I make my Moringa Oleifera happy again?
3
What are these orange insects under the leaves of my mandevilla?
8
Why are my lilacs dying and what can I do about it?
8
Bay Leaf Tree (Laurus Nobilis) with severe scale
5
Raspberry leaf curl disease? Can this be treated or prevented?
3
Why are some leaves on my Schefflera turning yellow and falling off?
7
Cherry tree pruning problems
1
Poor Persian Lime Tree